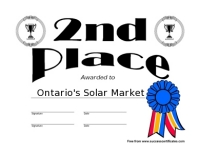 Ontario, Canada — The province of Ontario has leapt ahead of New Jersey to take second place in solar photovoltaic (PV) rankings for 2010. Ontario still trails California. At the current rate of growth, however, the solar upstart could rival California in 2011.

New Jersey installed 132 MWDC through the end of 2010. This brings New Jersey’s total installed capacity to 260 MWDC of solar PV.

The only other competitor for the top slots, Colorado, installed 44 MWDC in 2010, bringing its total installed solar PV capacity to 103 MWDC.

California has no central clearinghouse for data on solar PV installations. Responsibility for data collection is spread across agencies, investor-owned utilities, and municipal utilities. “Official” California Solar Statistics report that the state installed 152 MWAC, in 2010 or 180 MWDC. This is likely to go higher as more data becomes available.

In 2009, the Interstate Renewable Energy Council (IREC) reported that California installed a total of 212 MWDC, and in 2008 nearly 200 MWDC.

If passed experience is any guide, California may have installed as much 240 to 250 MWDC in 2010. At present, no one knows for sure.

According to IREC, Ontario was third in North American solar PV installations in 2009. Florida and Colorado were fourth and fifth respectively.

In 2008, Ontario’s total installed solar PV capacity was less than 2 MW. Within two years the Canadian province has shot to the top of solar PV markets in North America.

ClearSky Advisors, a Canadian consulting company, estimates that Ontario could install 600 MWDC in 2011 if supply of solar PV systems can keep up with demand.