New Hampshire, U.S.A. — 2011 was “a breakout year” for CIGS solar PV as suppliers continued to trim production costs, increase module conversion efficiencies, and widen adoption in commercial rooftops. But while CIGS (and thin-film brethren CdTe, thanks to First Solar’s market leadership) continue to press on, the solar PV industry is still very much dominated by silicon, which has more standardized manufacturing on the one end and far more installed capacity on the installation side — and all-important bankability thanks to both.

CIGS, meanwhile, is still evolving, with a variety of substrates (glass, steel, polyimide) and manufacturing processes e.g. deposition (sputtering, evaporation, inkjet printing), plus variety in the associated equipment. CIGS also faces challenges in lifetime/reliability and bankability. Which, on the flip side, means that CIGS continues to be an area where improvements and innovations in technologies and materials can have a major impact.

Lux Research, in a new report, projects the CIGS market will nearly double to $2.35 billion and 2.3-gigawatt demand in 2015, up from 1.2GW today, as the technology emerges “into an early growth phase.” Yet it is emerging in an environment where investments (e.g. venture capital) are hard to come by, and pricing pressure from the silicon side of solar PV continues to compress the cost equation and erode thin-film’s advantages. “Strategic partnerships between start-ups and industrial conglomerates are likely to determine this technology’s overall viability and competitiveness,” says Pallavi Madakasira, Lux Research analyst and lead author of the report.

Who has the best chance of achieving escape velocity in CIGS? Lux plots out the players on an “Innovation Grid,” below. Some conclusions: 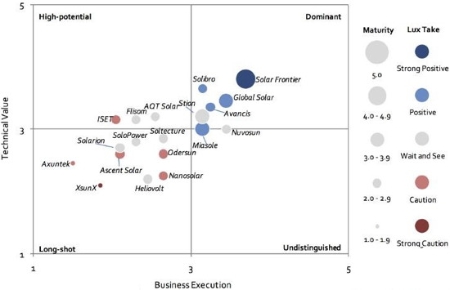