There are a wealth of products available in the solar thermal sector, but it is hard to tell which ones match up in the performance stakes. Amin Bennouna explores the evolution of performance and the results of a comparative study of both flat plate and vacuum tube systems.

With the growth in solar markets and the resulting toughening of the competition, manufacturers are being forced continually to raise their game. Evaluating the available technological offering is of major importance in any industry sector, especially before starting any new manufacturing line. This requires a fine understanding of the competition’s offer and knowledge of existing product performance, general trends, and an eye on potential new product positioning.

As part of an analysis of the solar thermal technology spread, we compiled a database of 652 tests of glazed solar thermal collectors. The database contains test results from five different international test 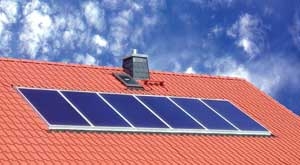 institutions. Of these tests, 235 were performed by SPF of Switzerland, 157 by the USA’s SRCC, 106 by ITW of Germany, 106 by CSTB of France, and 48 by Austria’s Arsenal. Comparisons with other institution results are still in progress. For hot water tanks and their optional included heat exchangers, the results are obtained from the manufacturers’ own specification sheets.

The equipment tested came from 220 brands and of the total 652 tests performed, some 509 concern flat plate collectors and 103 tubular. The results reveal not only the diversity of the technical offering available in this sector worldwide, but also common elements and their evolutionary trends.

Although solar thermal collectors are divided into three main types: glazed flat plate or tubular evacuated for water and/or space heating, and unglazed flat plate for swimming pool heating, the analysis only considers glazed systems. Furthermore, product origin, prices, or qualitative aspects such as the absorbers, glass, insulating and casing, are not considered either. In terms of geometrical aspects, three collector areas can be considered: the absorber area (the active surface as considered by physicists), the gross area (obtained from the external height and width as considered by manufacturers and distributors), and the aperture area (gross area minus lateral insulating layer surface, which is mainly considered by European test institutions).

When needed, raw test data have been converted to refer to the collectors’ aperture area, and to the ISO9806 standard when the tests had been conducted done under the European EN12975 standard.

According to the analysis an ‘average’ collector has an open area of about 2.67 m2 and the dominant technology offering is in the range 2-2.4 m2. Figure 1, below, shows the aperture area (left axis indicates the frequency of the surface class while the right axis indicates the percentage having an open area smaller than the class). The absorber area is usually close to the open area, however, the proportion of open area compared to the raw area gives an idea of the optical surface per unit of raw material purchased by the manufacturer. Nonetheless, a ratio of one is inevitably excluded as a result of the casing edges, including the lateral insulating thickness which would result in higher thermal losses when too small. 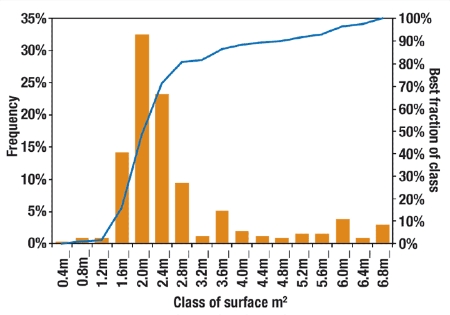 The same graph plotted for the distribution of aperture area would show an ‘average’ collector having an open area ratio of about 0.904, with most collectors lying between 0.86 and 0.92.

The collector edge size (half of the difference between raw and aperture dimensions) is directly related to the insulating thickness. The distribution of existing edges sizes shows that a typical collector has an edge size of about 2.9 cm and that the dominant offer is in the range 2–4 cm. Most manufacturers have 2–3 cm

thick insulation with a gap between absorber and insulation lying in a range between 0 and 0.9 cm. 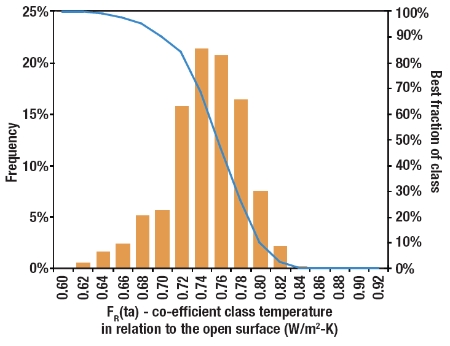 The effect of lateral thermal losses is relatively lower for bigger collectors and a sign of this is revealed by a slight fall of collector thermal losses against area (about 1% per m2 of incremental area).

There should not be any explicit link between collectors’ optical efficiency and thermal losses. However, the plot of these two parameters shows a slowly decreasing trend, sign of slight effort on the part of manufacturers to simultaneously improve absorber insulation yet also absorber selectivity and glass transmission.

There were 104 tests concerning tubular solar collectors. As tubular collectors are modular, there is no need to present more surface statistics than the distribution of existing aperture area. An ‘average’ collector has an open area ratio of about 0.77 with a wide spread distribution of the available offering. The plot of collector the aperture surface against raw area reveals a slope passing through the origin. The linear correlation between the two parameters indicates that the aperture ratio is, on average, around 0.769. 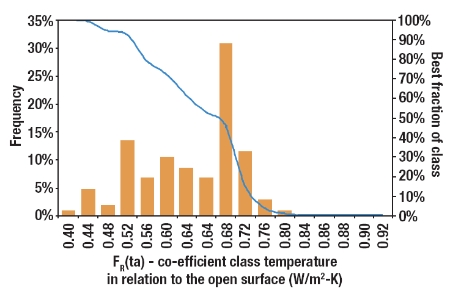 For tubular too, there should not be any explicit link between collectors’ optical efficiency and thermal losses. However, unlike plate collectors, the plot of these two parameters shows a positive gradient which denies a common effort of manufacturers to improve simultaneously the collector thermal losses and the optical efficiency. On the contrary, the wide range of engineering constraints associated with tubular collectors seems to forbid some collectors from having, at the same time, a better optical efficiency and lower thermal losses. This might be due to technical and / or price incompatibility between evacuated tube sealing and the use of some high transmission glass and/or some high selectivity absorber material.

A plot of the tank thermal losses (in W/K) against volume the two thirds power of the tank volume – for an almost constant height to diameter ratio, this is proportional to the tank external surface – shows that the correlation curve passing through the origin is almost linear. This is due to the fact that most of manufacturers use a combination of insulating thickness/material leading to similar behaviours. For a given height to diameter ratio of around 1.5, this gives an average heat transfer coefficient around 0.34 W/m2.K, which, in turn, leads to 0.034 W/m.K thermal conductance (close to the polyurethane foam value for a 10 cm thickness). 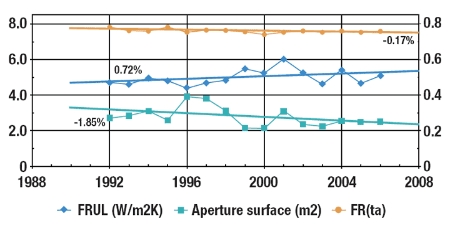 The relative stability of the parameters over the last decade highlights the maturity of glazed flat plate solar collector technology. However, a few details are interesting to note. For example, there is a trend for yearly average collectors’ aperture area to decrease by about 1.85% per year (collectors in the 1980s were significantly larger than 3 m2). In addition, the thermal losses increased by about 0.72% per year, although this is almost entirely explained by the decrease in the collector surface area. However, the slow (–0.17% per year), but evident decreasing trend in the optical efficiency is surprising at first sight, indicating that more manufacturers are using less transparent glass and /or less selective absorbers.

It would appear that the flat plate collector industry has reached a level of maturity whereby it is difficult moving forward without supplying more materials both in terms of quantity (insulating thickness) and in quality (insulating quality, glass transmission and absorber selectivity) without supplying equivalent performance. This trend towards lowering the collector optical performance could be explained by an improvement of the performance-to-costs ratio in a market-driven demand. Simply put, additional technological sophistication in glass quality and absorber selectivity might not be cost-efficient. Because tests are not recurrent every year for a given brand, it is difficult to extract evolutionary trends for say a ‘top ten’ product list. However, the history of a given brand can be benchmarked as trending ‘better’ or ‘worse’ than the average. 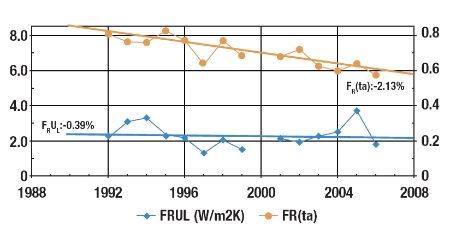 Over the last decade, only the thermal losses seem to be stable, the small, -0.39% per year, improvement might be due to the relatively small size of the tubular collectors sample. Due to shifts toward new technologies, optical efficiency is moving substantially downward at -2.13% per year. However, an explanation for this negative trend is not possible without further qualitative analysis.

Overall then, flat plate collector technology seems to have reached a maturity status that is still not evident for tubular collectors. It is true that the more recent designs are progressively sharing the solar heating demand with the glazed flat plate collectors, but the evolution during the last decade reveals a small trend towards lower optical performance of collectors.

Professor Amin Bennouna is the founder-director of Istichar energy consultancy based in Marrakech, Morocco, and former vice-president of the Moroccan Solar Industry Association.
e-mail: istichar@menara.ma