As profit margins for demand-side solar participants in the multi-megawatt grid-connected sector begin feeling the strain of low power purchase agreements (PPAs), tenders and other compensation for solar generated electricity that are set by bid, the off-grid segment of the market has become more interesting, in particular, the use of solar for off-grid applications such as village mini-grids and facilities.

In large part this interest has partly been encouraged by aggressive forecasts of multi-gigawatt demand into these sub-segments of the remote habitation application segment. The primary flaw to the assumption of multi-gigawatt growth into this application includes the assumption that the size and demonstrative need of the available population correlates directly to the deployment of off-grid solar. Aggressive forecasts tend to ignore the affordability gap (ability to pay, system maintenance) among the target population(s).

Typically there are few incentives available for off-grid installations as well as a high degree of administrative roadblocks in the path of deployment.  The last point, administrative roadblocks, includes the fact that these concerns are significantly different in developing countries from the industrialized nations. Even though the remote habitation application (which includes village grids, water pumping, remote facilities and remote homes) experienced 28 percent growth in 2012 over 2011, primarily due to strong demand in China and India as well as other countries in Asia and Latin America, there is no indication that a wholesale and accelerated replacement of diesel by PV is in the offing.

Figure 1 presents the growth behavior of the remote applications from 2007 through 2012. 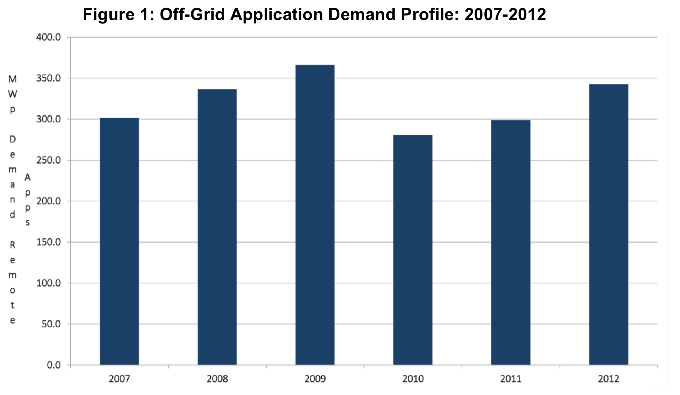 Figure 2 presents solar remote (off-grid) and grid connection application growth from 1986 through 2000, the cross over point at which grid connected applications became the driver for solar industry growth. 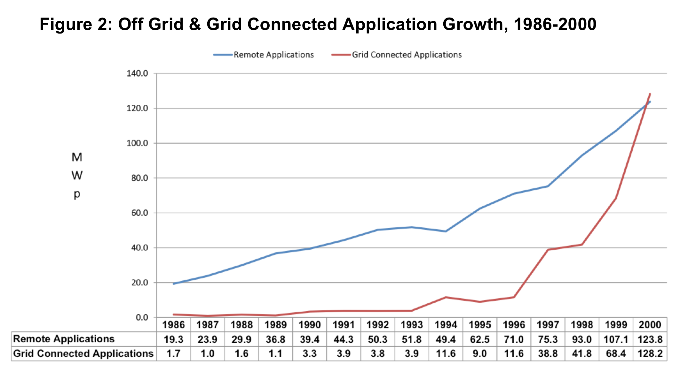 Table 1 provides data on application trends from 1997 to 2012.  Off-grid applications remained 1 percent of total MW in 2012 and experienced growth of 15 percent. 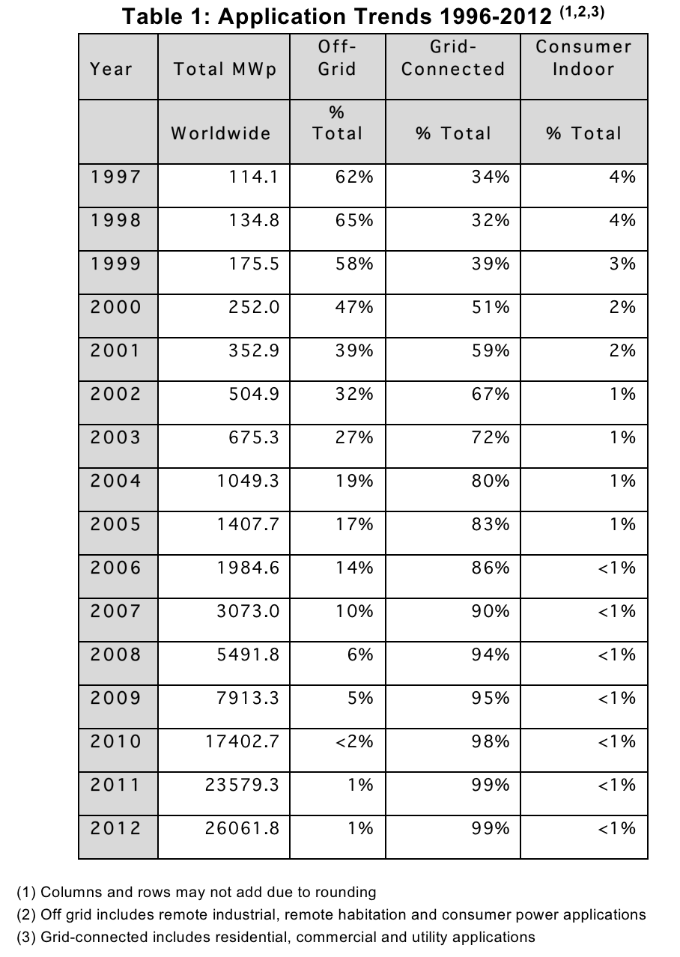 The Europe feed-in-tariff (FIT) incentive model stimulated accelerated growth into the grid-connected application as well as a significant increase in manufacturing capacity.  Rapid changes in FIT programs, as well as the ending of programs in formerly strong markets (Italy) have left a void in many strategic plans and re-trained interest on the off-grid applications.  Whereas previously, achieving grid-parity was assumed as the tipping point for photovoltaic deployment globally, off-grid deployment is garnering interest because of a) current low prices for technology and b) the absence of utility subsidized electricity as a competitive force.  Of course, off-grid applications compete with entrenched diesel generators and other polluting sources of energy, which are also not easily displaced.

Currently, as previously noted, the photovoltaic industry finds itself moving from a high-incentive environment to a low-incentive environment where payment for electricity is set by bid.  This is leading to (often overly optimistic) expectations of accelerated growth for off grid applications. There is not historic basis for these expectations.  Though the growth rates for the remote markets, in general, seem low, it is worth remembering that industries other than solar would celebrate these growth rates and consider them strong.

During the recent period of strong growth (2004 through 2011) and the abbreviated period of profit that accompanied it, many participants believed that there was nothing off grid deployment could teach grid connected participants.  This was incorrect.  Off-grid participants can teach how to survive and thrive without incentives.