WASHINGTON, D.C. — During 30 years on a rooftop, a solar panel gets bombarded by UV rays, soaked by rain, buffeted by wind, pounded by hail. 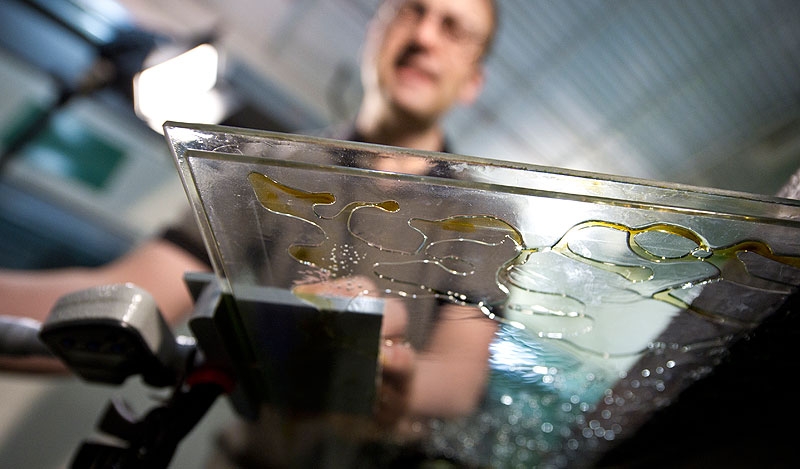 Working in his lab at the NREL Outdoor Test Facility, NREL scientist Michael Kempe measures the “creep” of the top and bottom glass of a solar module, testing the encapsulant and demonstrating how enough stress can produce a spectacular failure.

How well it stands up to that beating is a crucial factor in setting the warranties of solar modules — and in convincing the public that solar energy can be counted on like the sun rising in the east.

The U.S. Department of Energy’s (DOE) National Renewable Energy Laboratory (NREL) plays a crucial role in improving the reliability of the photovoltaic (PV) panels that are being installed on rooftops in record numbers.

NREL helps set standards for reliability and serves as a neutral third party in tests of manufacturers’ new solders, edge seals, and glues. At its Golden, Colorado, campus, NREL subjects solar panels to heat, humidity, and mechanical stress to simulate conditions in Denver, Phoenix, the Philippines, and elsewhere.

In March, leading scientists and engineers in the industry gathered at NREL for the PV Module Reliability Workshop. The workshop encouraged a frank discussion of reliability problems that can plague solar power companies.

What standards are needed for the glue in the edges that seal a panel’s top and bottom? How does weather affect cracking? What can be done to prevent one glass panel from creeping away from the other? 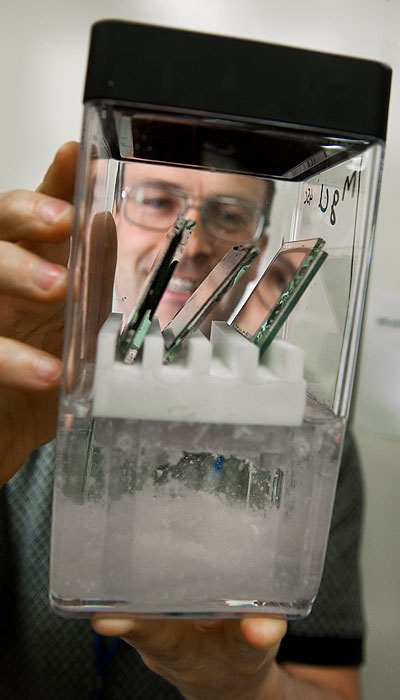 NREL scientist Michael Kempe holds PV samples he is exposing to a saturated salt solution to control humidity. The samples are being tested for possible failures.

Solar modules must be sealed to keep out moisture — and that’s why edge seals are so crucial.

On what looks like a whirling see-through geodesic dome — albeit just two feet in diameter — NREL scientists attach matchbook-sized samples that simulate the construction of PV modules to determine at what combination of UV radiation, high temperature, high humidity, and mechanical stress those samples can fail.

It’s important that manufacturers not just check for single stresses. By demonstrating that a combination of two or three factors can cause a failure, NREL is helping manufacturers prepare for the worst.

“We help manufacturers to know what kind of stress to put on their samples to determine if Sample A is better than Sample B,” Kempe said. “Every tiny detail, every aspect of these things has to be examined.”

A typical 12-millimeter-wide edge seal should keep out moisture anywhere in the world — from Salt Lake City to Bangkok — if it maintains a good adhesion, Kempe said. And the cost is between $1 and $2 a module, whether it is a tape-style edge seal or a hot-melt extrusion. 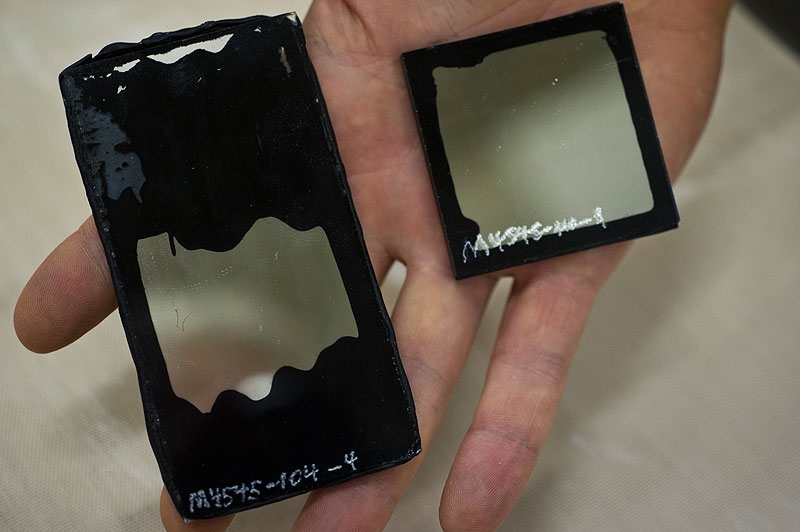 NREL scientist Michael Kempe holds PV samples he is testing for edge seals in an Atlas CI 4000 Xenon Weather-Ometer. The machine is used to give mechanical, light, heat, and humidity stress to PV samples.

NREL has been able to share good news with the industry.

In the case of “creep,” NREL’s sophisticated tests showed that the problem isn’t as big as was feared.

In a solar module, two pieces of glass are adhered together with a plastic encapsulant that may be solid at one temperature but flow — or “creep” — at another temperature. If it flows during the expected lifetime of a solar module, solar panel components can be displaced, and that can cause a short, break electrical connections, or even cause fires.

The stakes are high: a one-centimeter creep can expose live wires to the elements, and that can cause arcing or other serious safety problems.

NREL’s tests found that most encapsulants used today or proposed for future use do a very good job of preventing creep. But showing that failure is possible keeps manufacturers from becoming complacent.

Last summer, Kempe and his colleagues used eight different encapsulants from six manufacturers to assemble several mock and actual solar modules. The scientists then evaluated them side by side in an objective manner, and in a way that uncovered strengths and weaknesses of the various encapsulants without pointing fingers at individual companies. The industry’s trust in NREL made the tests possible. “They were able to participate without the fear of being singled out,” Kempe said.

The researchers put insulating materials on the test modules and deployed them in Arizona so they would reach the highest temperatures (104°C) that are likely in the field.

The only material that crept significantly in the outdoor experiments was one that was intentionally formulated improperly so that it would still melt at moderate temperatures.

“All the other plastic materials that people in the industry were considering for encapsulation were essentially OK outdoors,” Kempe said. “It would only be under very extreme circumstances that you might have a problem. The standards community realized that this stumbling block was not nearly as big an issue as was suspected.” 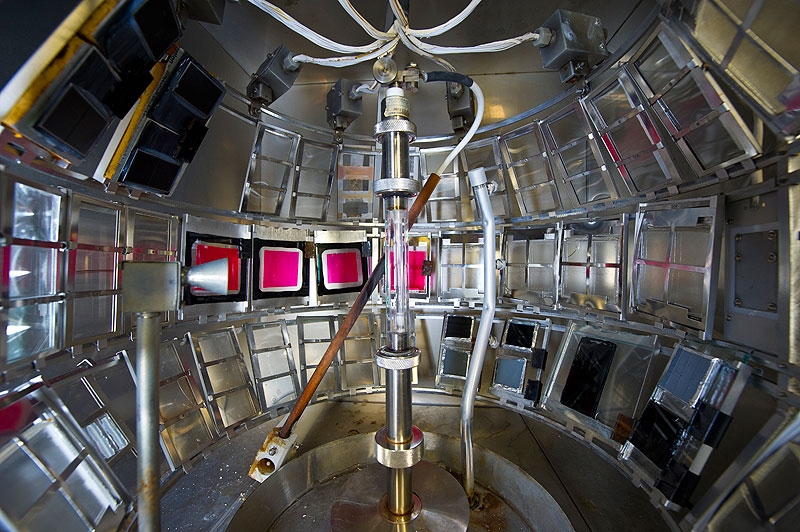 Shown here is a close-up of the inside of an Atlas CI 4000 Xenon Weather-Ometer used to test small samples of solar panels. NREL scientists apply temperature, humidity, and mechanical stress to the samples to show industry how they can fail.

NREL also works on the problem of concentrating PV cells overheating in a module. Concentrating PV uses lenses to focus more sunlight on a solar cell. The solder or epoxy that adheres the panel’s glass and edges will fatigue with time because of temperature changes that happen with the weather, NREL scientist Nick Bosco said. When the attachment goes bad, heat can’t escape, and the cell overheats.

NREL uses high-frequency weather data to model the changes in cell temperature for Houston, Los Angeles, Albuquerque … wherever a company wants a climate test. The data are publicly available.

The most damaging locales are those with high temperatures and partly cloudy skies. The frequent temperature changes when clouds pass by can cause extra stress. “In Golden, Colorado [site of NREL’s main campus], where we get hot mornings and then clouds roll in every afternoon, that can be more damaging than in Phoenix where you don’t have many clouds,” Bosco said. “We’re early in the process, but we’re seeing easily a 20% to 40% difference between certain locations.”

To test the effect of temperature cycles on the modules, NREL uses various solders and epoxies to attach pieces of the panels, and then exposes them to different temperatures at varying intervals. Researchers test thermal cycling in indoor chambers and expose modules to outside conditions, comparing the results.

“We’re interested in how cracks grow in the solder as the module goes through cycles,” Bosco said. “Our instruments can image the cracks on a computer, analyze them, and measure their size. We’ll do that periodically, then put the module back in the chamber, do more cycles, then measure the growth rate of the cracks as a function of the number of cycles.”

Bosco is working on models and experiments to determine the amount of damage the attachment will accumulate. The goal is for the indoor test chamber to accurately reflect outdoor conditions.

“The amount of damage the attachment accumulates is different for every city, and we’re hoping to model that,” Bosco said. “We’re hoping to be able to make real-life predictions based on location.” So many cycles in the chamber is equal to so many years outside. “So, a company might expect similar crack growth after so many years.”

The challenge for industry is to design solar modules that are very durable and reliable, yet not overly expensive. NREL scientists and their industry counterparts agree they can meet that challenge.

“They’re looking for a route to a less expensive design and architecture of a cell assembly,” Bosco said. NREL is able to figure out why a solution works, not just that it does work. It can report that a change in design or materials has this or that consequence in reliability. And NREL shares that knowledge with the industry to help the technology move forward.

NREL scientists and their industry partners have learned that an accelerated test will mean different things in different locations — and that the material and architecture of the design can influence reliability dramatically. “You can certainly have an expensive bad design,” Bosco said. And, of course, a good product that is incorrectly installed can fail.

As tempting as it is to accelerate the testing so that new, presumably better products can get to market sooner, testing experts know that validating a product for 20 or 30 years of useful life is complicated without comparisons to real-life durability.

So, NREL and the industry keep a poultry analogy in mind. “When you’re trying to hatch an egg, you give it 25 days at about 40°C, and you get a chicken,” Kempe said. “If you try to accelerate the time by accelerating the temperature, you get a boiled egg.”

The results of NREL’s testing will provide the technical basis for changes to reliability standards.

Today, the standards aren’t robust enough to predict the overall longevity of solar panels. NREL, the PV industry, and the attendees of the PV Reliability Workshop are working toward the day when tests and standards can determine the lifetime reliability of a module.

“What can come out of this is a graded test sequence,” Bosco said. “If you pass, say, Level A, it means the module is good for a lifetime in these certain locations. A stricter Level B certification will provide a similar lifetime warranty in more damaging locations.”

This article was originally published on NREL and was republished with permission.