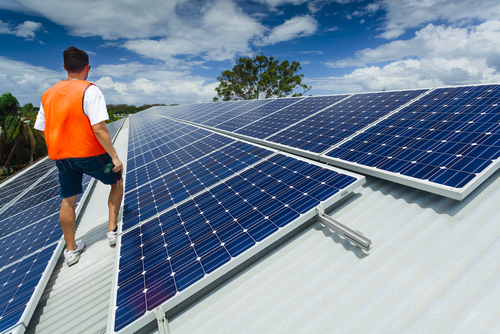 Thanks in large part to state and federal incentives, the cost to install solar PV systems has decreased 400 percent over the last eight years, while technology advancements have improved system efficiency. As a result, the cost of solar energy is approaching the point at which governmental incentives will no longer be necessary. In recognition of the continued need for governmental incentives for the near term, President Obama recently signed into law a bill that extended the Investment Tax Credit and Bonus Depreciation, both of which have been instrumental in the growth of the U.S. solar industry.

The current strength of solar is unquestionable. New solar facilities are coming online at a pace that exceeds those powered by coal, natural gas and oil combined. The solar industry is generating jobs at a pace 20 percent greater than that of the U.S. economy as a whole, with the country’s solar industry now responsible for more than 200,000 full-time jobs. The U.S. Solar Energy Industries Association predicts that the extension of the federal tax incentives will lead to a 25-percent increase in U.S. solar capacity, fueled by a 15-percent increase in solar sector jobs in 2016.

Further emphasizing the importance that renewable energy will play in the future of U.S. energy policy, President Obama has promulgated the Federal Clean Power Plan and executed the Paris Climate Change Agreement. There is little doubt that solar power must play a significant role in achieving the emission reductions required by these agreements. As a result, the U.S. solar industry is positioned for significant growth.

Notwithstanding all that the U.S. solar industry has going for it, some states are taking actions that may not only stall the growth of the industry within their borders, but may reverse many of the advancements that have made solar such an important part of the future of U.S. energy policy.

The state of Nevada recently sent shockwaves across the industry when it enacted a new solar tariff structure that industry groups say will destroy the Nevada solar market, one of the fastest growing markets in the country. In the immediate aftermath of the decision, SolarCity and Sunrun announced that the new tariff would force them to shut down operations in Nevada, eliminating more than 500 jobs.

Prior to the adoption of the new tariff, owners of solar facilities in Nevada paid no special fee for the “privilege” of owning a facility and received 11.6 cents per kWh for all solar electricity that was not immediately consumed on-site. Following the passage of the new tariff, owners of solar facilities will be charged up to $40 per month for the use of existing infrastructure, while their reimbursements for electricity injected into the grid will drop to as little as 5.5 cents per kWh. The new monthly charge and reduction in reimbursement will more than erase the $11 to $15 per month the average Nevada homeowner saves on its electric bill, eliminating the economic benefit of “going solar.” To add insult to injury, there is no “grandfathering” clause in the new tariff, so it applies to all those who already invested in a solar facility in reliance on the more favorable tariff.

Why would Nevada go out of its way to kill what was one of the fastest growing solar submarkets? With state and U.S. taxpayers having invested billions of dollars to help the U.S. solar industry approach the cusp of becoming a self-sustaining industry that is vital to U.S. energy policy, this would seem to be the worst possible time to pull the plug! Some speculate that it has to do with the close ties that state officials have with traditional energy interests. Nevertheless, if Nevada does not take action to reverse the effect of the new tariff, solar energy in Nevada is going to go the way of the dinosaur.

Nevada is not the only state revisiting its solar policy. Arizona recently enacted similarly drastic changes, and the California Public Utilities Commission, which regulates more than half of all U.S. homes with solar panels, decided to keep its favorable solar tariff in place by a narrow 3-2 vote. Further, more than half of U.S. states have enacted or are considering changes to their solar policies.

Nevada and Arizona are putting the brakes on solar at a time when the federal government has made solar energy a significant and indispensable part of U.S. energy policy. The recent extension of solar tax incentives will result in hundreds of millions of federal tax dollars being injected into the U.S. solar industry, creating thousands of new jobs and significant tax revenue for states that have favorable solar policies.

By all accounts, the cost of solar will continue to drop, and many expect it to near or reach parity with other sources of energy by the time the latest round of incentives expires. States that have favorable solar policies will experience the economic benefits of the continued growth of the industry, while states like Nevada will have a very difficult time enticing the solar industry to invest within its borders.

The U.S. solar industry is not without its growing pains, but it has become a permanent and significant player in U.S. energy policy. States with mature and stable solar industries that continue to incent solar installation, such as California, Massachusetts and New Jersey, will be in position to experience the economic benefits of the continued growth of the U.S. solar industry, while short-sighted states like Nevada will stand idly by and watch.