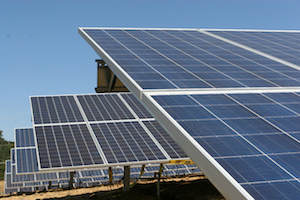 A free market is precisely what the word free implies that is, market prices and the choice of goods are set by the interactions of market participants. Under this definition, there are few, if any, free markets in the world.

Governments intervene to subsidize or incentivize production of goods and the acquisition of goods. In the U.S., farmers sometimes received subsidies not to produce under the assumption that over production would lead to a price collapse. Electricity rates in U.S. states must be approved by state PUCs. Subsidies provide affordable housing for poorer populations. Pick a market and you can find a government incentive, subsidy or a control of some sort.

So, seriously, there are few, if any, free markets.

The global solar industry relies on mandates, subsidies and incentives for its demand. Though it has enjoyed extraordinarily strong growth overtime this growth has come about because of, again, subsidies. Current low prices for PV modules are possible because of China’s support for its PV manufacturers.

The 2012 U.S. tariff ruling on imports of cells and modules from China resulted in higher prices for small buyers and, frankly, no price change for larger buyers. In sum, for larger buyers the sellers absorbed the tariff. The primary goal of sellers was sales, margin was secondary. Higher margins were gained from smaller sellers who also absorbed the tariff. Exporters were then not truly punished because the goals of the exporter (seller) were not properly understood.

The lesson is that market regulations, incentives, subsidies, mandates and tariffs come with unintended consequences. When tariffs are enacted the primary entity punished via higher prices is the buyer. The price pain felt by buyers is almost always the unintended consequence of the imposition of tariffs.

Just as markets are not entirely free, markets are also not entirely rational or controllable. Tastes change. Competing products rise. Drought and heavy rains affect agriculture. People go on strike. Recessions affect buying ability. Finally, sometimes people make irrational buying choices. Consider the cell phone which went from the size of a person’s arm to the size of a watch face to practically the size of a laptop computer screen and is now migrating back to not just watch face size, but to being an actual watch.

The point is that controlling buying patterns is close to impossible and punishing sellers for low prices typically punishes the buyers and worse … almost never brings back manufacturing jobs.

A good example of the unintended consequence of government intervention is the Smoot-Hawley Tariff Act of 1930. In the 1920s an excess of agricultural production in Europe led to low price imports of produce into the U.S. Farmers suffered and Herbert Hoover promised that if he were elected president he would help U.S. farmers. (As an aside … if this seems familiar it should.)

Enter Willis Hawley, Congressman, Oregon, and Reed Smoot, Senator, Utah. Smoot-Hawley began as a protection for farmers but after much debate fed by many special interests it was eventually attached to a wide variety of imports (~900). Other countries retaliated with their own tariffs. The U.S. trade deficit ballooned. Smoot-Hawley did not push the world into the Great Depression but it certainly was a card in the Depression playing deck.

In 1934, as part of the New Deal, President Franklin Roosevelt pushed the Reciprocal Trade Agreements Act through and the short reign of protectionism in the U.S. ended … just in time for the beginning of World War II in 1939.

Immediately following Suniva’s bankruptcy on April 17, rumors of a new trade dispute began and late in April Suniva, a U.S.-based monocrystalline manufacturer over 60 percent owned by a Chinese company, filed its trade dispute asking for a 40-cent/Wp tariff on all solar cells made outside the U.S. From Suniva’s point of view, the request makes sense as it is one of two crystalline solar cell manufacturers in the U.S. — the other being SolarWorld.

Proponents say that it would protect U.S. solar manufacturing but as there is very little U.S. manufacturing and the reasons for its demise are complex, there is little to protect.

The fact is that larger entities continued to enjoy low prices and will always enjoy lower prices than smaller demand side participants.

The fact is that bringing back U.S. solar manufacturing is close to impossible at this juncture using tariffs. It would require a lot of time (a lot of time), favorable taxes for producers as well as other manufacturing subsidies and most importantly, a healthy incentive for buyers to purchase modules made in America with crystalline and thin film cells made in America and … even then … the aluminum, the glass, the backsheet — something in the module will come from some other country.

The fact is that the products bought in the U.S., including the foods we eat, are often produced using components from other countries.