More
Home Solar Is the Suniva Bankruptcy a Canary in the Coal Mine for Solar? 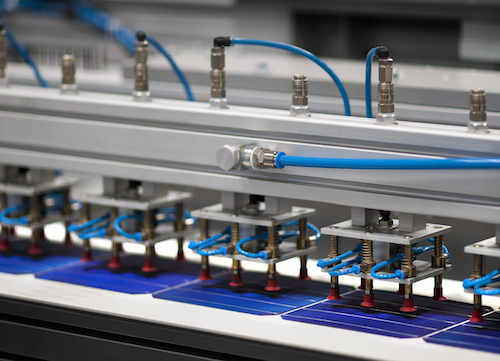 In the satiric movie Network, Howard Beale said: “Edward George Ruddy died today! Edward George Ruddy was the Chairman of the Board of the Union Broadcasting Systems and he died at eleven o’clock this morning of a heart condition! And woe is us! We’re in a lot of trouble!!”

On April 17, auspiciously the day before tax day in the U.S., Suniva, a U.S.-based manufacturer of monocrystalline cells and modules that had just completed a capacity increase, declared bankruptcy.

And woe is solar manufacturing in the U.S.! It’s in a lot of trouble!!

To be clear, this is not just another take-your-breath-away turn on the solar rollercoaster nor is it about the oft-talked about industry consolidation. Suniva’s bankruptcy is about the loss of jobs, incomes, hopes and dreams just as the bankruptcies of SunEdison, Suntech, SatCon, Sungevity and so many others were about the loss of livelihoods. Consolidation is an appropriate yet cold term for what is likely to happen in the global solar industry.

Should Suniva be unable to pull itself out of bankruptcy and resume operations, it should serve as a canary-in-the-coal-mine warning to the industry, and face it, the industry has lost quite a few canaries to the painfully low margin competitiveness of global photovoltaic manufacturing.

The U.S., Once a PV Manufacturing Leader Now…Not

The data in this section is based on shipments of crystalline and thin film cells and modules from the manufacturer’s internal crystalline cell or thin film panel production. The size of the global photovoltaic industry in any calendar year is based on the capacity of the electricity generating material.

The U.S. was the shipment leader until 1999. In 1999 Japan’s popular rooftop residential incentive along with its relatively closed market helped its manufacturers capture share and take over the leading spot.

In the mid-2000s, Germany introduced the feed-in-tariff (FiT) incentive. The introduction of the FiT in Germany was rapidly adopted in other European countries and deployment of solar PV soared to gigawatt levels. In 2007 manufacturers in Europe (primarily Germany) took the lead, holding it until 2009. In 2009 manufacturers in China, employing an aggressive pricing strategy, began dominating global shipments and the rest is history.

In 2012 tariffs on imported modules from China to the U.S. were set. These tariffs primarily punished demand side participants, particularly smaller installers, and did little to correct the situation.

In 2015 U.S. demand soared and shipments from U.S. manufacturers soared along with demand growing by 38 percent over 2014 right back to the 1-GWp level enjoyed in 2010. In 2016 the party again came to an end as demand pressures in China orphaned production and sent module prices into a nosedive.

Figure 2 is presented to place the U.S. in a global perspective. During the period in Figure 2, U.S. shipments grew by a compound annual rate of 17 percent.

In contrast, global shipments grew by a compound annual rate of 40 percent for the same 20-year period. 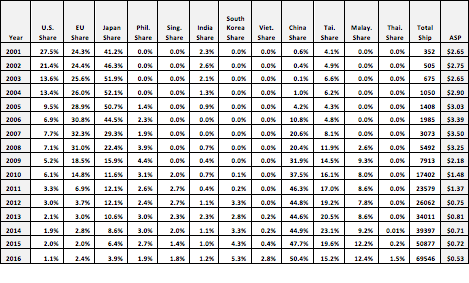 What the Decline in U.S. Solar Manufacturing Means to You

The lure of low prices is very hard to resist and is partially responsible for the decline in U.S. solar manufacturing. Poor U.S. government support for its manufacturing sector and ill-timed, poorly executed tariffs did not help bring manufacturing back. Incentives for installers and developers to buy and install at the project level might have helped once, but that time has passed.

Those looking for jobs in solar manufacturing will not find stable employment in the solar sector, as price pressure has squeezed the viability out of the sector. Plenty of solar construction jobs but manufacturing is unlikely to recover. Module assembly is different from cell manufacturing, and here, the U.S. could see some recovery though highly competitive pricing means that these jobs are not stable either. As to the failure of Suniva, Sungevity, SunEdison, Solyndra and other small module assemblers, those thrust out of work often with no notice are also victims of aggressive pricing and the goal of being the number one shipper of cells and modules.

As the cell inside the module you buy can come from anywhere (but the U.S.) you have little quality control to go along with minimal price control. Suniva’s bankruptcy also leaves its warranty obligations likely unmet meaning that small to medium installers may have nowhere to go if modules fail in the field.

Suniva was a small manufacturer and its failure will not have much of an effect on most developers and EPC. However, should the current administration tighten rules and insist on buying American for projects with any kind of government incentive (PURPA, ITC), well, there simply is not enough cell manufacturing or module assembly in the U.S. to meet its current high level of demand.

Have an idea for a new wafer, cell, manufacturing technique or module design? The U.S. with its growing market should be the land of opportunity, but with industry goals set firmly on lowest price you face an uphill battle. Do not give up. Innovate.

You may think you are buying American, but you probably are not. You may think the brand on your module means that the manufacturer developed the cell that generates the electricity, but it is probably a different manufacturer from a different country. You may think your warranty protects you, but … it may not. For homeowners and small business people wanting to get their electricity from solar doing so is a huge and gratifying step towards energy independence, but know before you buy and get involved in the politics that define the industry you will be a part of once you own that solar roof.