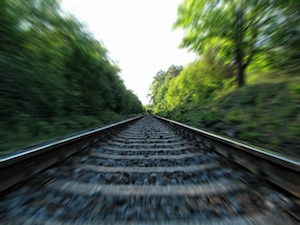 The Trolley Problem is a set of ethical dilemma scenarios developed by British philosopher Philippa Foot in 1967.

Assume you are the driver of an out of control train. Ahead of you on the main track there are five people tied up and unable to move to safety. If you pull a lever the train will barrel down an alternate track to which one person is tied, unable to move. No matter what you choose you will be safe.

The Slippery Slope of Choosing the Lowest Module Price

Prices for solar wafers, cells and modules took a highflying leap off of the margin diving board in 2016 with the global average decreasing by 13 percent over 2015 from $0.72/Wp to $0.63/Wp and the range of prices widening vastly for a lowest available price of $0.31/Wp and highest available price of $2.50/Wp.

At the beginning of 2017 module prices range from <$0.30/Wp to $1.75/Wp and the year promises to be uncomfortable for manufacturers trying to run an entire business with razor thin gross margins.

Figure 1 offers module average costs, prices and the delta from 2006 through 2016. 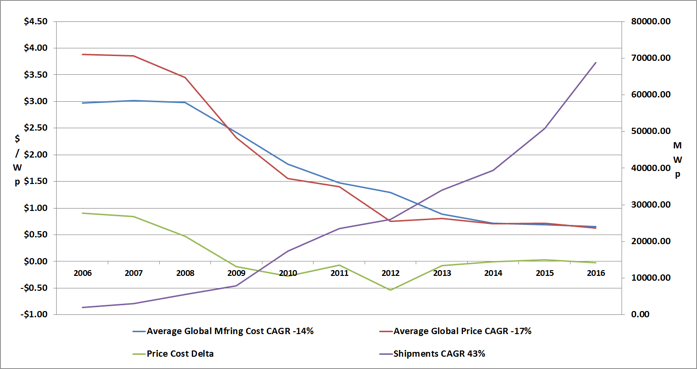 Observing the average selling price and the average manufacturing cost in a market is useful because it establishes the trend over time. In particular, the average price reflects the behavior of buyers in the market for a specific period. Over a number of years, the trend serves to describe the market’s relative maturity as long as other metrics that influence the price are also observed.

Observing price behavior within a specific month or even quarter is not as useful as the annual average because the short term is subject to shocks that affect both buyers and sellers.

For example, as demand in the solar industry is still driven by subsidies, mandates and incentives, a shock to any large market will ripple through the price function.

For another example, at the end and the beginning of every year prices for solar modules drop because manufacturers, distributors and even installers who are holding inventory want to move that inventory.

Currently cell and module manufacturer gross margins are below the level necessary to run a healthy business. Prices have been held down for a number of years by the expectation of lower prices, and these expectations are often driven by nothing more than conversations among colleagues and friends. Many also believe that variable costs are synonymous with the manufacturing costs and this is not true.

As for years the solar industry has celebrated its unprofitability and promised further unprofitability the lowest price in the market is believed to be the average, and any data that does not support this view is often ignored. This behavior is the essence of confirmation bias.

Along with prices, module quality has been declining steadily and modules are failing faster in the field. This is a problem in terms of the warranty obligation and the industry’s reputation.

The expectation of ever lower prices from impossibly low levels is a slippery slope for manufacturers. On their way down this slippery slope they make compromises on inputs, choosing the lowest price backsheet, EVA, junction box, etc. Manufacturers offer free on board shipping terms when the margins earned do not support any frills or concessions.

Back to the Trolley problem as it pertains to solar module pricing. The module price trolley you are driving is barreling down the tracks of a steep hill. If it continues on the main track it will gain miniscule margin by cutting costs on backsheets, EVA, UV, glass, aluminum, polysilicon and it will have to widen tolerances and quality control standards in order to serve an accelerating, though consistently vulnerable market. If you continue, margins will be further pressured and all manufacturers will be forced to make quality compromises but the market will grow. Meanwhile, failures and other problems in the field will increase, O&M costs will increase and production (and thus revenues) will fall.

If you throw the switch, you will head down another track where prices increase slightly and are held steady until manufacturing cost improvements and technology advances catch up. Some sales will be temporarily lost. Developers will feel more margin pinch but this may lead to more sustainable PPA and tender bidding. The market may slow on this track but the slowing will be temporary and meanwhile quality in the field will improve and O&M costs may be lower. Energy production (and thus revenues) will be higher.

Unfortunately, there currently may be no way to throw the switch as expectations of lower prices are baked into the solar lexicon. Developers, EPC and installers may choose not to understand that low prices pressure manufacturers to choose low cost components and cut other corners in manufacturing and quality control but the costs of saving money on manufacturing are always felt in the field.

And now to climate change, global temperatures are increasing rapidly, much like credit card debt with compounding daily interest that you may never pay off if you do not act fast and decisively.

You are driving the climate change train. Ahead of you trapped on the main track is every living creature on earth including insects and plants. If you choose this route no one will be asked to conserve, deployment of renewables will continue but at a slower pace, the climate will continue to warm, severe weather events will become more common, sea levels will rise, the air will eventually become unbreathable and the dire effects of climate change will become irreversible. Eventually everyone will suffer.

But, aha — there is an alternate route and on this route is, again, every living creature on earth including insects and plants. If you choose this route most people will be temporarily inconvenienced by an initial increase in the cost of energy as the switch to renewables is accelerated and conservation habits settle in and a few will see lower profits from coal, oil and natural gas as they make the technology switch but in the end all will be better off.

Here are your choices:

A: Do nothing and allow climate change to barrel ahead, the air to be poisoned, the climate to warm, extreme weather events to become more common and future attempts to ameliorate the damage to be unmanageably expensive. This choice does not immediately inconvenience anyone and it is profitable for a few. Eventually, of course, it inconveniences everyone and is costly for all.

B. Pull the lever and barrel down the alternate track where everyone pays a little more initially as renewables are deployed and all must learn to conserve energy while a few suffer lower profits initially but everyone is saved from future disaster.