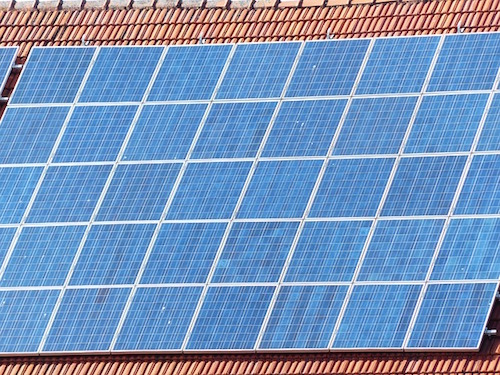 Andy Johnson works with the soil. When younger, he served in Peace Corps in Central America for three years, working on conservation practices. Then he worked in the Natural Resource Conservation Service for years, the same agency that his father Paul Johnson headed by appointment from Bill Clinton in 1993.  After moving back to northeast Iowa in 2007, he started farming christmas trees and grass-fed beef cows, but thinking about how the concept of conservation applied to his community’s energy use and economy.

When stimulus money became available in 2009, Andy used his knowledge of soil and water conservation districts to promote the idea of using those funds toward a energy district around Decorah, IA. The idea became more popular than he imagined, as he and an assembled board of directors won a federal grant.

In the follow-up from our community-owned renewable energy report, Beyond Sharing: How Communities Can Take Ownership of Renewable Power, we released the second in a series of Local Energy Rules podcasts that informed the writing of this report.

In December 2015, Johnson talked with ILSR’s John Farrell about the Winneshiek Energy District and how they promote energy efficiency and renewable energy for all county residents, as well as what the future holds for distributed energy everywhere.

Soil and water conservation districts grew out of the Dust Bowl era, when poor farming practices exacerbated dust storms and extended droughts. Sped into law by President Franklin Roosevelt, these districts were local-state-federal partnerships that provided farmers with technical and financial assistance in sustainable land usage.

The Winneshiek Energy District — the first of its kind in the nation — works much the same way, only instead of keeping the soil on the ground, it keeps the money spent on energy within the county. The organization estimates that $100 million dollars largely leaves the county every year to reimburse the out-of-state energy interests.

In all, Winneshiek County has more than 190 watts of solar per person, according to numbers provided by Johnson. The county would rank second among the solar-friendliest cities in the United States.

Little Help From the Utility

Johnson understands that investor-owned utilities such as Alliant Energy have to make a profit for investors. But those profits don’t stay in the community.

“It’s a tough question,” he says about working with Alliant. The utility hasn’t been much of an ally, and has stalled on the idea of a community solar array in Decorah. “It’s been a tough uphill battle.”

The Winneshiek Energy District works with the utility, but mostly below it, with the utility’s ratepayers. It’s different from other energy districts, which are governmentally-formed zones, driven by legislation in the past decade, that create funding opportunities for renewable energy and energy efficiency — Connecticut and Ohio support some of the best examples here. Winneshiek, on the other hand, is a nonprofit, and supports more than just a municipality or a specific subset of people, says Johnson. That enabled it to offer free energy efficiency services to more than 500 households in recent years, while working with the utility on offering more general measures such as community solar gardens.

Winneshiek has met with Luther College, local governments, and other large electric customers to put pressure on the utility. Another route is participating in the proceedings of the state regulatory agency, the Iowa Utilities Board — something Johnson is doing now to defend net metering and the value of solar — or talking to state lawmakers.

Local control of energy, at the very least, can be helped most by the municipal or cooperative utilities of the state, or even encouraging a town to form their own utility. Johnson predicts that most municipal utilities and co- ops will be working sooner or later toward 100 percent renewable energy. “Hopefully the utilities, in the rapidly changing energy world, will increasingly and more and more rapidly work with their customers,” he says. “But if not we have to do what we can with our communities.”

Thanks largely to the Winneshiek Energy District, renewable energy is on a tear in Decorah, representing what a little bit of local energy planning can do for people. Now Johnson is talking to other people in other states who want to do the same thing.

“Energy districts are essentially meant to be the boots on the ground as well as the preachers of what can happen.”

This is the 35th edition of Local Energy Rules, an ILSR podcast with Director of Democratic Energy John Farrell that shares powerful stories of successful local renewable energy and exposes the policy and practical barriers to its expansion. Other than his immediate family, the audience is primarily researchers, grassroots organizers, and grasstops policy wonks who want vivid examples of how local renewable energy can power local economies.

It is published intermittently on ilsr.org, but you can Click to subscribe to the podcast: iTunes or RSS/XML. Originally published at ilsr.org. For timely updates, follow John Farrell on Twitter or get the Energy Democracy weekly update.