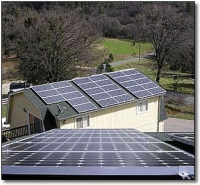 California might not be the only solar energy Mecca in the U.S. anymore. A recent entry into the field of solar photovoltaic manufacturing has chosen to relocate across the country from California to New York, a state which has joined California in aggressively pushing for more use of renewable energy, not only as a source for clean, diversified electrical generation, but as an economic job engine too.

Halfmoom, New York – June 22, 2004 [SolarAccess.com] The publicly-traded California upstart, DayStar Technologies elected to relocate the company from Grass Valley, California to Saratoga County, New York where it will establish its corporate headquarters, manufacturing plant and research and development facilities. DayStar plans to develop an 18,000 square foot manufacturing and R&D facility in Saratoga. In the next 18-24 months, additional expansion will occur into new facilities being constructed at the site to meet the company’s growth needs. The company has developed a thin-film, copper-indium- gallium-selenide solar photovoltaic cell, known as a CIGS solar cell. The company is developing a high-volume manufacturing process at the STEP facility that it believes could result in solar electricity power production at commercially viable rates. Some generous incentives from New York helped sway to company to make the move out of California. The New York State Department of Economic Development provided a package of State and local economic incentives valued up to $11,136,000. DayStar was specifically looking to relocate in a State with a vision for promoting renewable energy. The company’s CEO, John Tuttle said they spent a great deal of time assessing where to headquarter their new facility. “After considering the attributes of numerous sites, it became evident that New York State, and specifically the Saratoga Technology + Energy Park (“STEP”) facility in Saratoga County, represented the ideal home for us,” Tuttle said. California is still the leading state in terms of installed capacity of renewable energy and will likely continue to be, but other States on the East coast like New York and New Jersey are becoming increasingly fertile ground for renewables. “DayStar’s announcement is a great win for the people and economy of New York State,” said Governor George E. Pataki. Under Pataki’s leadership, the State of New York is earning international distinction for conceiving and implementing some of the Country’s most progressive renewable energy initiatives. Aggressive environmental legislation has been passed to actively support the development and deployment of renewable energy resources like solar, geothermal, biomass, and wind power to help the New York achieve a series of key objectives, including alleviating its dependence on traditional fossil fuel sources of energy; reducing harmful greenhouse gas emissions; and creating new industries devoted to the advancement of clean energy. “Governor Pataki’s demonstrated commitment to advancing renewable energy technologies is consistent with our fundamental objective,” Tuttle said. “Further, the sophisticated academic and technology resources in Albany’s Tech Valley played a major role in our decision to move to New York. We look forward to working with local and State officials to build a Company of lasting value to our shareholders, the citizens of New York and the people of the world.” DayStar plans to complete the relocation of its corporate offices to upstate New York from California within the next 30 days and will begin expanding its engineering and support staff immediately thereafter. The State incentive package provides for DayStar to receive a series of tax credits and access to various State and industry sponsored grant programs, including the Renewable Energy Technology Manufacturing Incentive Grant from the New York State Energy Research and Development Agency.