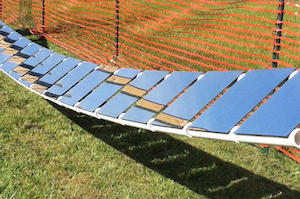 A new solar collector is starting a trend when it comes to concentrating solar power (CSP) technology. For the first time ever, “ganged heliostats” could be a viable option for new CSP systems.

Skysun, a startup out of Bay Village, Ohio, developed the new design that could help cut the cost of a CSP system by more than 30 percent.

CSP technologies use mirrors to reflect and concentrate sunlight onto receivers that collect solar energy and convert it to heat. The mirrors, also known as heliostats, typically require their own base, foundation, and motor.

Skysun’s solar collector groups together heliostats through shared motors and support structures, which has the potential to cut the total installed cost of CSP systems in half. While other ganged heliostat concepts have previously been proposed, none of them have shown to be cost competitive or viable—until now.

SkySun partnered with Sandia National Laboratories through a $275,000 Small Business Vouchers project funded by the U.S. Department of Energy (DOE) SunShot Initiative. Sandia reported that Skysun’s ganged heliostats can achieve an average price point around $80/m2. That’s 33 percent lower than the lowest average cost for today’s conventional heliostats ($120/m2) and close to the SunShot Initiative’s goal of lowering the cost of solar collectors to $75/m2.

Skysun’s biggest barrier was showing that the technology is not just comparable to current heliostats in terms of performance, but more affordable. They used a grant from Innovation Fund America to build their first lab-scale prototype, then worked with Sandia to model and optimize the system. Alongside Sandia, Skysun designed custom codes for mirror positioning to reduce shading from other mirrors within the system, making its peak efficiency comparable to those deployed today. So far, modeling on Skysun’s solar collectors show that its mirrors achieve CSP industry accuracy standards with winds up to 15-20 miles per hour.

Skysun founder Jim Clair believes he will be able to leverage the outcomes from Skysun’s collaboration with Sandia in his search for a strategic partnership to prepare this technology for market adoption. Describing Sandia as “the mecca for CSP,” Clair said Sandia’s support in demonstrating the ganged heliostat’s stability, performance, and cost will be instrumental in showing the technology’s viability to potential partners.