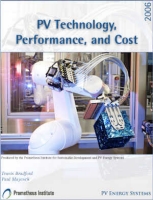 The world of current and emerging photovoltaic (PV) technologies is the focus of a new report from authors Paul Maycock and Travis Bradford, from PV Energy Systems and the Prometheus Institute for Sustainable Development, respectively. They address the performance of PV technologies and offer analysis, efficiencies and cost projections of the dominant technologies used in the photovoltaic (PV) industry today, including monocrystalline PV, multicrystalline PV, silicon ribbon and sheet, amorphous silicon, Copper Indium Diselenide (CIS)/Copper Indium Gallium Diselenide (CIGS), and concentrator cells. Maycock and Bradford, with a combined 50+ years in the PV industry, predict up to a 50% drop in the manufacturing cost of PV components by 2015 after careful analysis of silicon shortages, laboratory vs. production conditions, and emerging technologies.

The Field of PV Technologies In the last decade, over 1,000 MW of new cell and module plants, primarily using multicrystalline silicon, have made much progress in increasing efficiency, increasing factory size, and reducing costs. The manufacturing cost and efficiency improvement forecasts made in the 1995 edition of this report have, for the most part, become reality. These cost reductions, primarily due to volume purchasing of raw materials and reduced silicon consumption owing to thinner slices and higher efficiency, have resulted in new plants with fully burdened module manufacturing costs at the $2.40-2.75 per peak Watt (DC) level. (Note: these costs do include the recent rise in the cost of pure polysilicon from an average of $20/kilogram in 2001 to over $50/kilogram in 2006.) Conversely, most new amorphous silicon plants built in the last ten years have exceeded design costs and failed to reach design goals for efficiency and yields. With costs exceeding prices, the markets forecast for amorphous silicon power modules have not fully developed, though recent strong PV demand has led to resurgence in interest in the last year. One major new application for amorphous silicon is the use of flexible amorphous modules on membrane roofs and on standing seam metal roofs. Like the amorphous silicon plants, Cadmium Telluride (CdTe) and Copper Indium (Gallium) di-Selinide (CIS or CIGS) pilot plants in the last decade have been delayed several years from original announcements for a variety of reasons, including lower than expected yields and difficulty with in situ interconnections and migration to large area formats. Once adequate product stability (less than 1% annual degradation in electric output) and life of service (at least 25 years backed by an adequate warranty) are established, two factors are important in understanding the competitiveness and usefulness of any PV technology. These are the module’s efficiency and its cost. Module Efficiencies by Technology Module efficiencies are important in determining the system performance by area; this factor can lead into economic issues involving the balance-of-systems (BOS) components and maximum system output when space is a constraint. It is important to focus on average, stable module production efficiencies here, as laboratory or best efficiencies may cloud comparisons across technologies. Monocrystalline silicon modules can now be made at 18 percent efficiency, due primarily to the work of three leading silicon theorists and experimenters: Dr. Richard Swanson (SunPower), Professor Ageet Rohatgi (Georgia Institute of Technology) and Prof. Martin Greene (University of New South Wales). We forecast maximum module efficiency at 22-25 percent, with cell efficiency at 23-25 percent by 2015. SunPower’s recent announcement of a 22%-efficient cell suggests that the technology is already moving quickly to meet that goal. a-Si/monocrystalline (HIT) is made by depositing a layer of amorphous silicon on a monocrystalline slice. Currently produced by Sanyo, which refers to the technology as HIT, cell efficiencies are currently up to 18 percent, improving to 22-24 percent efficient by 2015, and will give the best of monocrystalline silicon modules a very tight race for module efficiency leadership. Multicrystalline silicon modules will remain about a tenth less efficient than comparable monocrystalline silicon modules, due to the heterogeneous nature of the wafer. While only in the mid-teens today, these modules should still achieve efficiencies above 20 percent in the next decade. Silicon ribbon and sheet (multicrystalline) modules will be about the same efficiency as cast ingot multicrystalline silicon modules, having closed the gap in the last few years. Essentially, these technologies create nearly identical multicrystalline wafers to the sawn ingots with significantly reduced silicon losses and fewer process steps from silicon to wafer. Amorphous silicon and Cadmium Telluride modules will reach about 12 percent efficiency through better deposition and junctions. Copper Indium (G) di-Selinide (CIS/CIGS) modules will approach 14 percent in full-scale production, once the deposition technologies and encapsulation difficulties are worked out at volumes higher than today’s production. PV Technology, Performance, and Manufacturing Cost – 2006, which will be released on December 15, 2006, costs $1,200. Half of the proceeds will support the Prometheus Institute for Sustainable Development, a nonprofit research and educational organization working to accelerate the deployment of socially beneficial technologies.