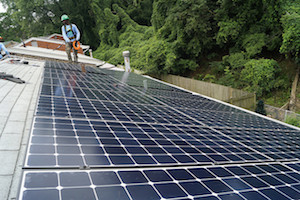 According to Rosen’s office, if passed, the legislation would allow duties and tariffs to default back to previous rates, and companies that imported any affected solar products under this new tariff would receive retroactive reimbursement.

“Solar energy’s success throughout Nevada has led to new jobs, cheaper power bills, and the growth of a new industry that is diversifying our state’s economy,” Rosen said in a statement. “This Administration directly threatened the stability and financial well-being of our local solar industry when the President decided to impose a 30 percent tariff on imported panels. An attack on solar energy is an attack on the countless hardworking Nevadans who benefit from this growing industry, and my new bill will reverse this damaging decision.”

Trump agreed to a recommendation by the International Trade Commission (ITC) to grant U.S. solar manufacturers relief from unfair trade practices in the form of tariffs on solar cells and modules imported to the U.S.

The tariff decision was the result of a petition filed by Suniva last year asking the ITC to investigate whether increased solar cell and module imports caused serious injury to the U.S. industry. SolarWorld later joined the petition.

“This bipartisan legislation is an important step in countering the harmful impact of tariffs on the solar industry,” Hopper said. “Across the country, the rise of solar has generated thousands of new jobs and provided communities with clean, sustainable power. It is clear that solar is the energy of choice for Americans and we must do what we can to allow this economic engine to continue to advance here in the U.S.”