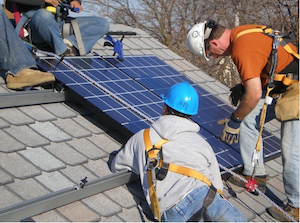 Following passage earlier this week of a bill to restore net metering in Nevada, Sunrun said it will re-enter the state’s solar market.

The bill would restore the ability of homeowners in Nevada to be credited based on the retail rate for the energy they produce and export to the grid. The Nevada Public Utilities Commission in late 2015 issued a controversial order that increased the fixed charges that solar customers in the state would pay over time, while also reducing credits for excess solar generation.

Sunrun in early 2016 joined SolarCity in pulling out of Nevada’s solar market, saying that the state created incentives to attract residents to go solar, and then switched the rules.

Sunrun in a June 6 statement said that it expects Sandoval to sign the bill this week.

“The near unanimous bipartisan support for legislation to reinstate net metering and establish a bill of rights for solar customers is a reflection of overwhelming public demand for affordable, clean energy options,” Lynn Jurich, CEO and Co-Founder of Sunrun, said in a statement. “Thanks to the hard work of Governor Sandoval and Nevada State Legislators, we can now say with confidence that Sunrun is coming back to Nevada.”

Reuters reported that a Telsa spokesperson said the company also would return to the state when the bill is signed.

According to Sunrun, AB 405 steps down net metering credit rates for homeowners as more solar is installed, reversing the abrupt and extreme reduction imposed on solar customers in 2015. Additionally, AB 405 establishes a bill of rights for homeowners, ensuring that utilities cannot burden customers with unexpected fees, and provides strong standards for transparent sales practices. It also gives solar customers certainty by grandfathering their net metering credit rates for 20 years and protecting them from being singled out for fees and charges not applicable to other residential customers.

The Nevada legislature this week also approved a bill that would increase the state’s renewable portfolio standard to 40 percent by 2030.

Vote Solar said that the State Assembly concurred with a version of AB 206 passed by the Senate, and the bill was delivered to Sandoval for his signature.

“In Nevada and across the country, overwhelming majorities of Republican and Democratic voters alike want more solar powering their communities, and it’s exciting to see Nevada’s elected officials standing strong for their constituents by standing strong for clean energy,” Jessica Scott, Interior West director for Vote Solar, said in a statement.