More
Home Solar Net-metering or Feed-in Tariff? Can They Co-exist? 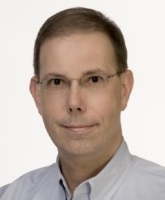 California’s recent near miss with a Feed-in Tariff, SB 1714, shows just how the U.S. solar market might get the stimulant to start the expansion the industry has dreamed about. The statewide 750 megawatt (MW), first come, first served, program would have allowed up to 3 MW per meter and used standard contracts to set terms and conditions between the system owner and the utility.

The CPUC would have tackled the $/kWh side of the equation and would have been tasked with valuing solar for the positive attributes it delivers. The simplicity of the bill echoes European programs and its implementation looked quite straightforward. It would also have created a model that other states could study and adapt for their use. Based on current legislative activity, the story may not be over for the new California FIT, so we’ll keep our fingers crossed.

It’s interesting that SB 1714 got so much traction so quickly after net-metering based SB 1 was signed into law in August 2006. The resulting 3,000 MW, 10-year, California Solar Initiative (CSI), launched in January 2007, now has less than 80 MW connected to the grid and the program’s uneven results have revealed many unintended consequences to implementing this primarily roof-top PV program. 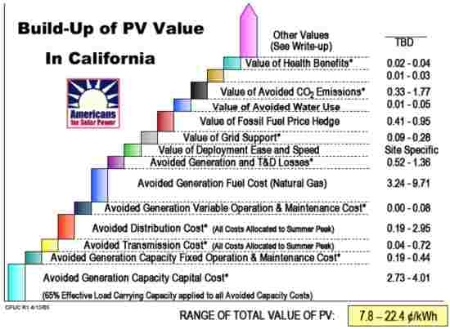 Americans for Solar Power (ASPV)’s 2005 landmark study on the value of PV in California should be refreshed and used as guidance when determining a FIT rate. The total value of PV has likely increased significantly. To view a document that explains this chart, click here.

The CSI’s massive complexity, poorly designed incentive structure and potential for gaming were apparent before the program started. Twenty months into the program there are no signs of acceleration and many in the industry consider the program dead in the water. Incentives have declined by 25 to 40%, without the hoped-for system-cost reductions, virtually eliminating the possibility for reasonable financial paybacks and endangering the industry’s health. SB 1’s objective of creating a sustainable solar industry is way off target.

On the upside, the CSI’s Performance Based Incentive (PBI) program has demonstrated how the industry can improve system design and kWh per installed kW output. And while it can be argued that the CSI has most benefited a few large companies, it has created a platform for the development of Power Purchase Agreements (PPA) and leasing mechanisms in both the commercial and residential markets. California’s real desire for more renewables, lessons learned from the CSI program and discussions about expanding the State’s RPS are likely the key reasons why the most forward thinkers in the solar industry, legislators, utilities and rate-payer groups were able to come together on SB 1714.

When considering the potentials of net-metering and FITs, it’s important to recognize that net-metering programs are designed to create incentives to install systems that generate power equal to or less than the predicted on-site load. FIT programs are designed so that systems can be installed at sites with no load, and generate electricity that is purchased, under contract, by the local utility.

On the surface, the experience with the CSI might lead one to conclude that net-metering should be discontinued in favor of a FIT. On the contrary, New Jersey’s program of several years ago, California’s CEC and SGIP programs and the early CSI commercial gold rush, shows that with the correct incentives, net-metering programs can stimulate demand on the retail side of the meter. For those that own a home or a commercial building, net-metering is a fine solution because most roofs, even fully populated with PV, can’t offset the full load of the building on an annual basis. Depending on a customer’s electrical tariff, demand charges, site location, program incentive level, PV technology selected, etc. a net-metered system can create a financial win and support the growth of distributed generation.

By simply adding another utility meter to the site and setting the $/kWh incentive correctly, the same roofs could be ideal candidates for a FIT system — an obvious solution particularly if the roof area can generate more power than the site requires, such as giant warehouses, farm buildings and parking facilities. Doing a FIT system on a roof also protects the system owner against a change in the building’s use that might decrease the power consumed at the building, as an example a manufacturing facility that changes to a distribution facility. In this scenario, using net-metering, the customer would receive a retail credit on his/her utility bill, but not have enough load to use the credits before losing them at the end of the year. A FIT would simply pay the generator for the electricity sent to the grid.

For sites that have seasonal usage patterns or low on-site load, net-metering is a non-starter. Yet many of these sites have large expanses of unshaded areas that would be great for solar — and in the case of parking lots and farms, should not face serious challenges with permitting requirements or local fire departments. By connecting FIT systems where no on-site load exists, such as vacant fields, we leverage solar technology’s best benefits and deliver power to meet local loads or support load growth. Using FITs to “farm electrons” will encourage more customers to consider investing in solar. That’s good for the industry — it expands the market opportunities for all companies and increases the demand for solar.

Today, based on the way California’s SB 1 and SB 1714 are written, it is not possible for a system owner to “double dip” and receive both a FIT and a net-metering incentive through a single utility meter. A system owner would have to choose. This is not to say that the same owner could not own two systems: for example, one on a roof top that receives a CSI net-metering incentive and one in a field that has a FIT system. A second utility meter would have to be installed and dedicated for the FIT system.

The potential interplay between net-metering programs and FIT programs could lead to some confusion and debate even among solar industry insiders. Our industry’s penchant for breaking into factions both internally and externally will certainly give even our most ardent supporters in government pause. Most importantly, as this debate develops, the advocates of net-metering will admit it is not a one-size fits all solution for expanding the use of solar in the U.S. At the moment net-metering creates some certainty for businesses and their investors. But if some larger, established companies work together to delay the implementation of FITs in the U.S. simply to defend their market position and business plan, they will slow the widespread adoption of solar needed to create scale, reduce cost and reach grid parity — our industry’s #1 mission.

Esoteric and theoretical arguments may exist about how a FIT could impact retail generators, but practically a system owner will choose the program that delivers the best financial return. The 30% federal ITC, as it exists now and (hopefully) in the future, creates the underpinning for financial returns. While possible, it is not likely that any state will create a program that can stand alone without federal incentives. Until real installed costs come way down, a commercial solar system won’t pencil unless you have a significant federal tax liability. Therefore system ownership will be concentrated to those entities that can consume those benefits.

Calculating ROI or IRR for a solar system is multi-variable exercise whose outcome is not dependent on an FIT or net-metering structure. Shifting investments into FITs will take some creative thinking, however no real threat to established companies, other than increased competition, can be easily identified.

If customers elect FITs, instead of net-metering, they will signal to the public policy makers that a FIT is preferable to net-metering. This could aid efforts by utilities to eliminate net-metering. But this is a false premise; utilities don’t like net-metering now and they don’t need one more reason not to like net-metering. They will work individually and collectively against it. If FITs align with their business model, create more distributed renewable energy that supports their grid system, and helps them meet their RPS requirements they may willingly accept it.

It’s easy to see in the California example how having both net metering and FIT programs in place simultaneously could deliver great options to a wide group of potential solar system owners. They can exist together, and consumers will send clear messages to policy makers about their preferences.

California’s has a great opportunity as the solar leader in the U.S. to show local, state and federal policy makers how to jump start the industry. Working to improve the CSI net-metering program and adding 750 MW of solar electricity to the grid, as proposed in the SB 1714 FIT will create more jobs, generate electricity where it’s needed and deliver real environmental benefits.

Glenn Harris is CEO of the consultancy firm SunCentric Incorporated.

To view the PDF of the latest version of SB 1714, download the document below.