New Hampshire, USA — Net metering is one of the most emotionally charged issues in renewable energy, and now it’s back in the spotlight. A panel discussion at PV America East in Philadelphia last week explored ways that utilities and ratepayers can agree on how to quantify net metering’s benefit. Almost simultaneously, a major utility exec’s public criticism of net metering is fanning the flames once again.

Net metering policies are in place in 43 states and Washington DC — a “wildly successful” expansion, noted PVA panelist Evan Dube from SunRun. Two studies released in recent weeks, looking at California and Vermont, calculate that net metering’s annuals benefits to ratepayers outweigh costs. The Vermont study in particular takes a broader view of net metering “writ large” and should be a model to use going forward, he noted.

There’s a glaring need for generally accepted practices and transparency; for example, how net metering can help utilities defer or avoid transmission and distribution (T&D) investments. Investing in assets to drive revenue growth isn’t as attractive anymore, pointed out John Costlow from the Sustainable Energy Fund. California is staring at $12-15 billion in transmission investments, and anywhere from $17-36 billion will be needed to bring Canadian wind and hydro power down into New England markets. Utilities may lament lost revenues through net metering, but cost recovery and avoidance of such massive outlays can be attractive to utilities, the panelists agreed.

Acknowledging tensions on both sides of the net metering debate, PVA panelist Thomas E. Hoff from Clean Power Research urged utilities and ratepayers to diffuse those tensions, focus on the numbers, and at least agree to what criteria can be counted toward the value of solar energy, even if utilities and ratepayers assign different weights to them. Basing the value of net metering can be settled in two ways, he explained: a “cost of services” which nets everything out into a single rate structure, or a “value of solar” in which consumption is treated separately from production. His example of different valuations of net metering compared Austin Energy and MSEIA (specifically Philadelphia); both had fairly equivalent numbers for the “value” of things like T&D capacity, generation capacity, and environmental benefits, but MSEIA added weight to related factors of economic development, market price reductions, and long-term societal benefits. 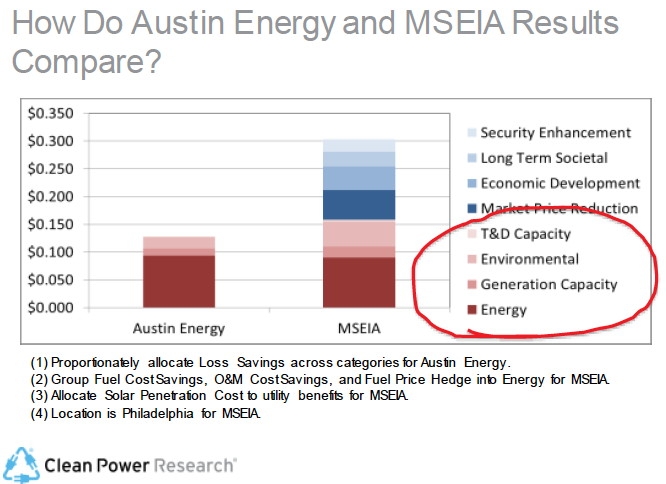 Another key to net metering is to understand its benefits beyond simply solar. Utilities see great value, for instance, in having instant granular data during a storm outage, showing them what actions would get the most customers back online with the least impact to equipment, noted Costlow. One audience member suggested one value criteria should be time of use; Costlow pointed out that days of increased obligation were also the days that solar provided more energy.

Costlow warned utilities to adapt their rate structures as solar power generation approaches grid parity, likening their situation to how the telephone industry was broadsided by the initially slow encroachment of cell phones, which turned into a warp-speed shift away from traditional land lines.

Despite calls for calm, it’s clear there are still very divisive views on the value of net metering. Days ago PG&E’s Helen Burt, senior vice president and “chief customer officer,” sharply criticized customers who install net metering for solar power, saying “they avoid paying their fair share of the electricity grid they use at night,” while “remaining utility customers pay for the fixed costs of the electricity grid and other programs, driving their rates higher.” She also criticizes a recent study showing the benefits of net metering, arguing “solar advocates paid for [it] using numbers that supported their position to reach a predictable conclusion,” even as the California Public Utilities Commission (CPUC) undertakes its own analysis of net metering.

Not surprisingly, this has incensed net metering users all over again. Run On Sun founder/CEO Jim Jenal calls Burt’s op/ed a “declaration of war on solar,” “faux populism” and “naked self-interest.” Expanding the argument, he ponders if PG&E will further penalize other practices that lower individual ratepayers’ energy usage, from installing LED light bulbs to more efficient commercial HVAC systems. “Is that the proper way to cover the cost of fixed assets? Perhaps not, but one thing is for sure, it wasn’t the solar customers who designed PG&E’s rate structure,” he writes.