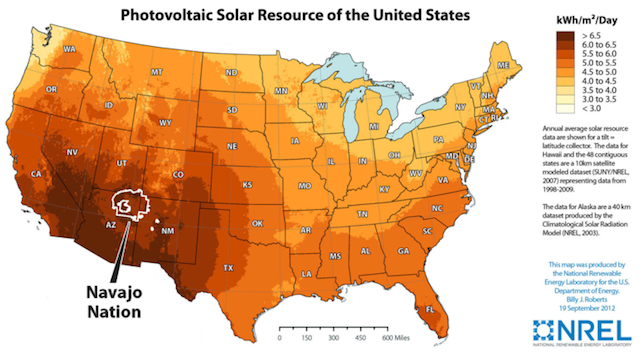 Momentum is growing around modernizing tribal renewable-energy policies on the Navajo Nation of Arizona, Colorado, New Mexico and Utah, according to a report published today by the Institute for Energy Economics and Financial Analysis.

The emerging interest in utility-scale solar is driven in no small part by the large-scale deployment of solar generation throughout the Southwest, and the report notes how Navajo lands remain something of an island in a growing regional sea of utility-scale solar installations.

Another factor driving the more aggressive pursuit of utility-scale uptake: The likely closure of the coal-fired Navajo Generating Station, a major employer and tax-base component.

The report concedes that a Navajo solar industry could be one building block in a post-coal economy.

“While utility-scale solar is not seen as a replacement for NGS job and revenue losses, it can be a component of a new tribal energy economy that can bring distributed economic benefits and greater energy independence to the region,” said Karl Cates, an IEEFA research editor and author of the report.

On the community-solar front, opportunities are seen now at Cameron, LeChee, and Kayenta. Navajo National officials are modernizing energy policy to help encourage development of more renewables. And NTUA officials say they expect to install more utility-scale solar across their jurisdiction.

Development openings are appearing fast, and the report builds on one previously published by IEEFA and Diné Innovative Network Economies in Hózhó that said:

“As the solar-industry footprint expands, Navajo communities are being courted by outside interests to participate in fast-moving development deals. The Navajo Nation, only 67 years old and built from a history of trauma, is not well-equipped to assess these opportunities, but tribal-chapter communities can get up to speed with proper advice and consultation.”

While few locales in the U.S. are richer in solar potential then the Navajo Nation, few models for utility-scale solar generation exist yet on tribal lands.