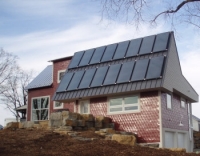 New Hampshire, United States [RenewableEnergyWorld.com] Sometimes the best way to educate the general public about new technology is to show them how it works in the real world. That’s what the American Solar Energy Society (ASES) says is at the heart of its National Solar Tour, now in it’s 13th year and taking place this weekend in cities and towns across America.

The National Solar Tour is a time when business- and homeowners using solar energy open their doors to the general public to show how they are using the latest solar technologies to reduce monthly energy bills, reduce carbon emissions and benefit from tax credits and cash incentives as they improve their property values.

Visitors are usually interested in going solar in the near future.

“The National Solar Tour is the nation’s largest collection of solar customers ready to buy,” said Neal Lurie, director of marketing for ASES. “Participants come in curious, but they leave convinced ready to go solar.”

This year’s event will take place in 49 states, Puerto Rico and Washington, D.C. and will feature more than 5,000 venues. ASES said that is is expecting close to 150,000 people to attend this year’s event.

Richard Burns, manager of the National Solar Tour for ASES said that he was surprised at some of the states that started to fill up with tours on his map.

“There is a very large contingent of tours in Ohio and Kentucky that you wouldn’t expect. There are some obvious markets where there are a lot of tours but the ones that are “off the map” so to speak are the most heartening,” Burns said.

Venues include businesses and companies involved in the solar energy industry as well as many homeowners, many of who have a unique story to tell. Lurie said some of the participants this year include a third-generation oil man from Oklahoma, a newly married couple who, instead of registering for gifts for their wedding, asked guests to buy them solar panels, a retired couple from Boston who put some of their retirement money into a solar system and are now seeing higher returns than they would have had they invested in the financial market and a two-tour Iraqi war veteran who became disillusioned with fighting a war for oil and is now studying for his PhD in physics to, “fight in the renewable revolution – the war for energy independence.”

Randy Stevens from SolarGreenCompany.com based in Arizona will also be participating in this year’s event. He helped his retired parents install solar to power their condominium and electric golf cart.

“I remodeled their house in such a way that it would be an example that others could follow,” Stevens said. “They had some extra money from the sale of their other home and, at their age, they might as well invest in something beneficial to them, future homeowners and the world. They viewed it as an investment alternative to CD’s or the stock market. They wanted to see if they could make their home an income producing asset instead of just another money pit.”

The Stevens home sits on an east/west axis and includes solar electric, solar water heating, solar daylighting and a solar-powered vehicle. The couple is not dependent on any outside source of energy including fuel for their vehicle.

Stevens said that he hopes people who see his parents home will realize that solar is a good investment to make not only for today but also for the future. He wants visitors to see that seniors such as his parents are making the choice to invest in tangible things like solar electricity and he says he also wants to show that solar is easy and its works.

“The installation of solar alternatives takes only a couple of days, the systems are not ugly, and they work. Most importantly they benefit everyone and are a legacy of benefit for the purchaser long after they are gone,” Stevens said.

The tour has grown from a few hundred people in 1995 to 115,000 people last year. Lurie attributes the growth to the personal level that people like the Stevens bring to the tour.

“It’s not so much about seeing the technology but having the human to human contact. It adds a personal touch that is so much more powerful than any other way to expose people to solar that’s out there,” Lurie said.

According to survey results from last year’s National Solar Tour, 76% of participants said they were definitely or very likely to invest in solar or energy-efficient technology after the tour, compared to 50% before the tour.

The National Solar Tour will take place on Saturday, October 4, 2008 in most locations in conjunction with National Solar Energy Awareness Month, which takes place in October. Details on specific dates and times of tours across the nation can be found at NationalSolarTour.org