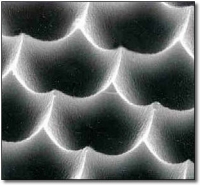 Scientists at Fraunhofer ISE have designed a multicrystalline photovoltaic (PV) cell that has an efficiency value of 20.3 percent, an increase of up to 5 percent for the technology that has had historically low efficiency values. Oliver Schultz, a doctoral candidate in Stefan Glunz’s group on high-efficiency silicon cells, has worked for two years to successfully develop a process that allows the problematic defects of multicrystalline silicon to be partially deactivated.

Frieburger, Germany – July 8, 2004 [SolarAccess.com] Today, 55 percent of all solar cells are produced from multicrystalline silicon, which is less expensive and easier to produce than monocrystalline silicon. Unfortunately, the cost efficient silicon contains more defects such as grain boundaries or dislocations. For this reason, the PV community has been content with efficiency values below 20 percent. Efficiency values for monocrystalline exceeded 20 percent years ago. “The trick is to choose temperatures during the solar cell production process such that the electrical properties of the multicrystalline silicon are improved and a high-efficiency solar cell structure is built up at the same time”, Schultz said. He matched the temperatures needed to create a highly efficient solar cell with the temperatures that are acceptable to the material, and are feasible in an industrial production process. Another important role in reaching the goal was the process for producing the back-surface contacts of the solar cell. Laser-Fired Contacts (LFC) technology is a process that offers an ideal combination of potential for high efficiency values and low production costs. The expensive and slow photolithographic steps that have been used up to now to produce the back-surface contacts of high-efficiency cells are no longer needed. LFC can be readily transferred to industrial production, though further development steps are still needed to achieve this for the highly efficient front structure. “This barrier was not only physical but also psychological, so we are particularly proud to have broken through it”, Gerhard Willeke, Head of the Solar Cell Department at Fraunhofer ISE, said.