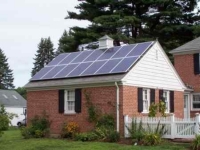 Connecticut and California, United States [RenewableEnergyWorld.com] Government-sponsored residential solar lease or loan programs are expected to proliferate now that the Connecticut Clean Energy Fund (CCEF) has launched its lease program and that Berkeley has secured a financing partner for its pilot loan program, industry specialists suggest. These programs can be funded in multiple ways, including bonds, rate-payer funds, or other financial mechanisms combined with private-equity financier funds from those with enough tax liability to take take advantage of the tax credits generated by from the projects.

Among other U.S. government entities already said to be considering programs similar to Connecticut or Berkeley are: the states of Colorado, New Jersey and Pennsylvania; California’s Santa Cruz County; and the cities of Boulder, CO, San Francisco, Galt, CA, and Palm Desert, CA. Other states likely to pursue a program could also come from among the 18 members of the Clean Energy States Alliance, to whom the CCEF recently presented its US $47 million solar lease program, said Angela Perondi, a project manager for the company.

Other financing participants in the Connecticut deal also suggest it will spread to other states. “We are talking to all the mid-Atlantic states now, but every state is different,” says Adam Stern, a partner of The Gemstone Group, the company that largely engineered the Connecticut solar lease deal. AFC First Financial will manage the leasing for the program and U.S. Bancorp is investing as a tax equity partner. The Connecticut program is initially targeting 1,000 residential installations over the next three years.

Peter Kraisa, CEO of AFC First Financial said, “We are in discussions with a couple of states to do programs similar to Connecticut, and we’re also talking to a number of large utilities.” He suggested that, “Much of this kind of development was waiting for the federal tax credit to be re-extended, so now the interest level has ratcheted up.”

U.S. Bancorp agrees. “We are bullish about investing in more such transactions,” said Matt Philpott, the vice president of historic, new markets and renewable energy tax credit investments at the company. Apart from U.S. Bancorp, which has long history of investing in real estate tax credit deals, other regional banks, like Wells Fargo, are said to be interested in solar lease financing.

In Berkeley, a pilot residential solar loan program worth US $1.5 million to finance about 50 homes will roll out this fall as part of a city council plan that recently won approval for up to US $80 million worth of bonds. Under the terms of the program, homeowners interested in making the investment in solar can take out city-provided solar loans and pay form them through increased annual property tax bills for a term of 20 years. If the homeowner moves, the loan is transferred to the new homeowner.

Berkeley has initially contracted Renewable Funding LLC to finance the pilot program. The company will help the city of Berkeley fund the program through its municipal bond-based CityFIRST program. “More than two dozen cities have indicated they would like to implement the CityFIRST program in their cities,” the company indicates on its website.

Another financial entity that has offered loans for 100% of the cost of residential solar systems is GE Money, which is working with the Electric & Gas Industries Association to offer utility-sponsored residential solar financing programs. Now that the federal tax credits have been extended, more utilities area expected to find that direct investments in residential solar programs will make economic sense and will help meet state renewable energy requirements.