Clean Energy Trends 2012, the annual report from Clean Edge by Ron Pernick, Clint Wilder, and Trevor Winnie, was released today. On the surface, it seems like good news for the solar sector. Although headlines in 2011 featured much bad press for Solar PV, the industry has not been “withering on the vine.”

Here are some key points in the report:

Reading Between the Lines

Sounds like good news to you?  Then you’re probably a consumer of solar electricity, not a company involved in the solar sector.

The two industry ETFs, TAN and KWT are a good proxy for solar stocks over the period.  Both were launched in 2008, and they’ve fallen 89 percent (TAN) and 71 percent (KWT) since then.

Why the horrible stock performance?  You can’t make up for lousy margins with volume.  The following chart shows how industry Revenues, GW installed, and prices have changed each year since 2007, along with Clean Edge’s annualized expected change over the next decade.  Also shown are the performance of the solar ETFs from July of one year to July of the next.  For 2007-8, I used two prominent solar stocks, First Solar (FSLR) and Sunpower (SPWR) as proxies for the industry instead. 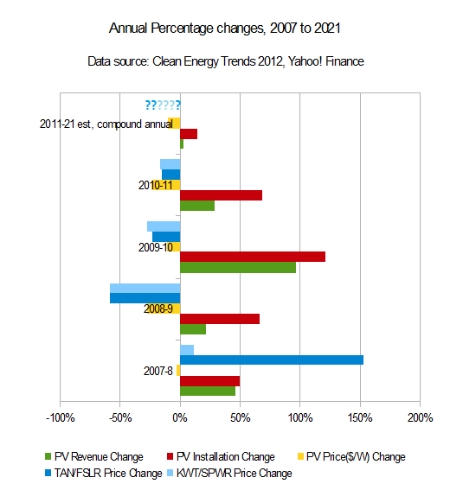 As you can see, the solar installations have grown robustly (by at least 50 percent) every year since 2007, but the only year this translated into good stock performance was 2007-8.  The most notable difference between that year and the last three was that solar prices fell only 3 percent, while installations grew 50 percent.  According to Ron Pernick, one of the authors of the report, the small decline in solar prices “was due to the fact that the global silicon shortage was still having a significant impact on pricing.”

The industry had been rapidly growing volumes at nearly stable prices.  This sent profits at many solar companies skyrocketing.  The reason First Solar did so much better than Sunpower was that First Solar’s panels do not use silicon, so the company was able to keep much of the rising revenues for itself, while Sunpower’s reliance on expensive silicon meant that most of the rapidly rising revenues from the panels it sold had to be passed on to its silicon suppliers, like MEMC Electronic Materials (WFR).

Incidentally, one of the very first articles I wrote about investing in clean energy was about the solar silicon industry in July 2006.  At the time I wrote, “I expect all polysilicon manufacturers to be very profitable through 2007, with prices beginning to subside (and perhaps crash) in 2008-9.”  WFR went public a couple months later in September 2006, rose 140 percent to hit its all time high in December of 2008, and lost 85 percent from that high by the end of 2009.  Today WFR is down 96 percent from its high.

As a less self-congratulatory aside, the great solar stock performance in 2007 led to a reliable contrarian indicator for the solar sector in 2008: the launch of two sector funds, the solar ETFs mentioned above.

After the financial crisis, demand weakened, and solar companies had to drop prices in order to keep demand growing rapidly.  Demand did grow a blistering compound annual rate of 84 percent over the next three years, but at the price of rapidly eroding margins at solar companies, causing stock prices to also fall even more rapidly (at a 35 percent annual rate.)

Going forward, Clean Edge expects solar prices to continue to decline fairly rapidly over the next decade, at an average annualized pace of 9.5 percent.  Meanwhile, they expect solar installation growth will be only a fraction of the current pace at 14%, and that solar industry revenue growth will slow to crawl at only 3.6 percent per year.  In fact, they predict that the revenue growth over the entire next decade will be less than the annual growth rate over the last ten years (at 42 percent and 43 percent).

I personally think the Clean Energy Trends growth estimates are low — 42 percent growth over the next two to four years (as opposed to a decade) makes more sense to me.  But that does not change my rather pessimistic conclusion: The stalled revenue growth and continued erosion of solar prices will almost certainly continue to undermine the profitability of the solar sector for years to come.

Solar stocks may look cheap now, but as every dedicated bargain-hunter knows, it’s a lot easier to find something cheap than to find a great value.  Solar stocks may be attractive for traders, but long term investors will continue to do well by staying away.

This article was originally published in AltEnergy Stocks and was republished with permission.