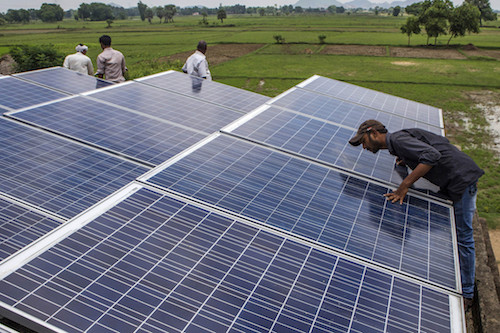 Fatih Birol, executive director of the Paris-based agency that oversees energy policy in industrial nations, said he’s working to encourage financial institutions to support Modi’s program, which was launched at United Nations climate talks in Paris 2015 along with France and the UN secretary general.

“The International Solar Alliance is a very important vehicle in order to make deployment of solar much easier,” Birol said in an interview in New Delhi at a ceremony where the IEA formed a link with India.

India’s Power Minister Piyush Goyal and oil minister Dharmendra Pradhan joined Birol at the event. The nation is at the heart of global discussions about energy because of the scale of its needs and the outlook for rising greenhouse gas emissions, Birol said.

Along with a push for more solar power and energy efficiency, India should make more use of natural gas and use coal in an environmentally friendly way to cut air pollution, the IEA’s director said. Thermal power plants should start using filters and scrubbers to cut harmful pollutants, and the nation should consider ways to make less-emitting fuels cheaper, he added.

“There is nothing wrong with more energy, but we have to try to reduce emissions coming from energy,” he said.

India’s power demand is a major variable in the debate about how to rein in global warming. It accounted for almost 7 percent of global emissions in 2012, World Resources Institute data show.

The agency’s outlook is for installed power capacity forecast to more than triple by 2040. India’s fleet of coal plants is likely to expand more than two and a half times, adding more of the greenhouse gas pollution blamed for increasing the global temperature.

Under the Paris Agreement signed by more than 190 countries, India has set a goal of having 40 percent of its installed electric capacity powered by non-fossil-fuel sources by 2030.

According to the IEA, India’s partnership is a milestone in the development of global energy governance and a step toward the agency broadening into a global organization. The IEA was established to advise industrial nations on energy policy in the wake of the 1973 oil crisis.

Birol identified electrification in India as a “major challenge.” IEA nations now account for about 70 percent of the world’s total energy consumption. The other countries with association status in the IEA include China, Indonesia, Thailand, Singapore and Morocco.