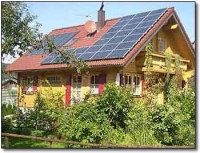 Tokyo, Japan [RenewableEnergyAccess.com] It’s official, Mitsubishi Electric has now entered the U.S. photovoltaic (PV) market. The move, with an initial focus on the Southwest, is part of a larger company-wide push at Mitsubishi to accelerate their sales of solar modules throughout the world.

The Japanese company will initially offer three types of solar modules, a 120 W, 165 W and 170 W module, offered through a network of dealers and distributors and system integrators in the Southwest, with a particular concentration on the California market. RenewableEnergyAccess.com spoke with U.S. representatives for Mitsubishi back during the initial announcement earlier this year. The move into the U.S. is a conservative one, but it’s a hopeful one with major expansion potential. “We felt the timing was right,” said Vern Kowitz, manager for Mitsubishi Electric’s U.S. photovoltaic division. “We’re testing the interest, we don’t want to jump in with both feet first.” This is the company’s first product push into the highly competitive and regionally oriented U.S. solar market — and the entire U.S. market might not be far off. “The U.S. would be the next approach, whether whole or certain states. Those are options right now,” Kowitz said. The regional California market is a particularly good place to start, according to Kowitz, since the state’s incentives and rebates have created and sustained a vibrant solar market. Mitsubishi isn’t necessarily a recognized name in the U.S. commercial solar photovoltaic (PV) market, but it’s hardly a new foray for the company which began building solar-powered satellites in the 1970s. Since then the company has established itself as a major global PV manufacturer, selling product to the Japanese and European markets and now to the U.S. market. The company recently increased their centralized global solar PV production in Nakatsugawa, Japan to 130 MW annually. In addition to the U.S. market, Mitsubishi’s entry comes at a time of increasing solar PV demands throughout the world, fueled primarily by strong demand in Europe from countries like Germany, which have robust incentives for solar. Demand is not as strong in the U.S. where only some states, like California, have taken a bullish stance on renewables while the federal government has done considerably less. “They’re (the federal government) not doing enough compared to Europe,” Kowitz said. “If the demand was greater in the U.S. most PV would come into the U.S.” While Kowitz feels Washington could do more to promote solar energy, he acknowledged that the solution will ultimately be a package deal between the manufacturers, the consumers and the government. “It should be the horse leading the cart, not the other way around,” Kowitz said, referring to strong state-based support contrasted with meager federal support.