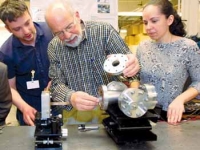 Cambridge, Massachusetts [RenewableEnergyAccess.com] Massachusetts Institute of Technology (MIT) researchers are trying to unleash the promise of an old idea by converting light into electricity more efficiently than ever before. The research is applying new materials, new technologies and new ideas to radically improve an old concept — thermophotovoltaic (TPV) conversion of light into electricity.

Rather than using the engine to turn a generator or alternator in a car, for example, the new TPV system would burn a little fuel to create super-bright light. Efficient photodiodes (which are similar to solar cells) would then harvest the energy and send the electricity off to run the various lighting, electrical and electronic systems in the car. Such a light-based system would not replace the car’s engine. Instead it would supply enough electricity to run subsystems, consuming far less fuel than is needed to keep a heavy, multi-cylinder engine running, even at low speed. Also, the TPV system would have no moving parts; no cams, no bearings, no spinning shafts, so no energy would be spent just to keep an engine turning over, even at idle. The research is partly funded by Toyota, the same company that has experienced such strong success with its fuel-sipping hybrid electric Prius. New TPV systems might mesh nicely with hybrid automobile technology in which fuel is saved by shutting down the engine when the car is stopped, such as at traffic signals. In the future, conventional cars may operate the same way. Providing electricity and air conditioning with the engine off will be a necessity. However, according to MIT’s press release on the research, Toyota has made no decision to develop this technology for automobiles. “What’s new here is the opportunity for a much more effective energy system to be created using new semiconductor materials and the science of photonics,” said Professor John Kassakian, director of the Laboratory for Electromagnetic and Electronic Systems (LEES), where the work was conducted. The idea is to create intense light, let it shine on new types of photodiodes to make electricity, and bounce any excess light back to the light source to help keep it glowing-hot. In theory, Kassakian said, efficiency could be as high as 40 percent or 50 percent. Kassakian is a professor in the Department of Electrical Engineering and Computer Science (EECS). His research colleagues are EECS Professor David Perreault and LEES principal research engineer Thomas Keim, plus EECS graduate students Ivan Celanovic and Natalija Jovanovic. At the heart of their energy system would be a cylindrical element, such as tungsten, etched with tiny pits — nano-holes — so it emits intense light at selected wavelengths when heated to a high temperature, perhaps 2,200 degrees Fahrenheit (1,500 Kelvin). Special light-sensing cells, made of a new material such as gallium-antimonide, would surround the glowing element, picking up the radiated light. A highly specialized filter, set between the two, would let the most useful light wavelengths pass through to hit the photodiodes, while reflecting light of less useful wavelengths back to the heating element, pumping up the temperature. The relatively high efficiency, compared to photovoltaic systems in use today, is expected to come from scientists’ new ability to fine-tune all three main parts of this system. This includes the light emitter, the cells that respond well to that tuned light, and a way to scavenge light at wavelengths that might otherwise be wasted. “This new technology is what makes it a very attractive system,” Kassakian said. “There are the new materials that let us build more appropriate photodiodes” that convert light into electricity. “There’s our new understanding of photonics that lets us build the selective emitters” to glow brightly at specific wavelengths. “And there’s the photonic band-gap filter, made of thin silicon and silicon-dioxide layers that act as selective mirrors, letting the desired wavelengths through and reflecting back the rest.” Of course, numerous engineering problems remain to be solved. Kassakian said the light-collecting cells will have to be cooled: “We’ll want to run as hot as we can, but not melt everything.” Also, different materials are being tested to see which work best in terms of light emissions, light harvesting and light reflection. “This whole concept is simple and not new,” he added. Back in the late 1960s and early 1970s, much research was done on TPV and light-harvesting technology, first to create solar energy systems for spacecraft, and then in response to energy shortages that spurred an intense burst of research into various alternative energy technologies, he said. The first focus of this MIT research “is for an automotive system that will take excess heat from the TPV system and use it to drive the car’s heating and air conditioning systems,” Kassakian said. “And what this would do is replace the present alternator and air conditioner, both of which are now run by the engine.” In addition, new TPV systems might mesh nicely with hybrid automobile technology, in which fuel is saved by shutting down the engine when the car is stopped, say at traffic signals. In the future, conventional cars may operate the same way. Providing electricity and air conditioning with the engine off will be a necessity. He added that such a system, once commercialized, might also be applied to other problems, such as supplying the power to run large semi trucks’ lighting, air conditioning and electronic systems, eliminating the need to run the diesel engine all night long while the driver rests. TPV-generated power might also be ideal for uses in remote places, distant from power lines, similar to what is being done now with solar collectors and fuel cells. Recent papers on this work have appeared in Physical Review B and the Journal of Applied Physics. Initial funding for the research was from the MIT/Industry Consortium on Advanced Automotive Electrical/Electronic Components and Systems.