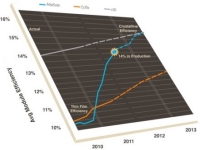 New Hampshire, U.S.A. — Miasolé says it has created a 17.3 percent “champion” thin-film copper-indium-gallium-selenide (CIGS) solar photovoltaic device, results obtained in its own labs and not (yet) independently verified.

The company also says it has started making 14 percent efficient modules in production at its facility in Silicon Valley, up from the 13.5 percent average-efficiency modules in volume production since last fall. Those milestones, the company says, represent a 30 percent increase in efficiency from a year ago, and beat its own roadmap by a full year. “Our ability to deliver 14 percent in production with the capability to achieve efficiency up to 17 percent further emphasizes the progress we are continuously making against our roadmap,” said Miasolé CEO John Carrington in a statement.

Miasolé was tops among CIGS solar PV modules in a recent Solarplaza ranking. (Note that top polysilicon module suppliers are currently around 15-16 percent efficiency, while mono-Si cell makers are at 21-22 percent, which translates to around 19-20 percent module efficiency.) The company has handily provided a chart for its module efficiency roadmap, showing a projected intersection with poly-Si efficiency sometime in 2013. 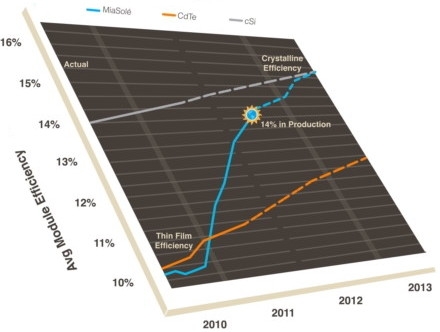 Lux Research puts Miasolé alongside a couple of other firms in the CIGS universe (and behind leader Solar Frontier) as potential “champions” if they can execute across module efficiency and production yields, and build relationships with customers and partners. The company raised over $100 million during 2011, and though it has ties with Intel to help improve its manufacturing, it continues to seek out “the right partner that could help make Miasolé a more long-term enduring company that’s good for our shareholders and our employees,” according to Carrington. The company claims 55MW of panels shipped to date for projects in North America, Europe, and Asia.