For so long it seemed like a pipe dream, yet in less than a decade utility-scale solar has reached $100 billion worth of capacity. Figures from the Energy Information Administration show that it delivered 5 percent of California’s electricity in 2014. The time has come to evaluate the impact which this technology can have, not just in the United States but globally.

Around the world there are now 2,500 operating photovoltaic generation stations with a capacity of 5 MWp and above. These add up to a total of 37 GW; and an additional 55 GW is under development in a further 1,200 projects. Historically, the majority of this capacity has been distributed between Europe, North America and Asia; but South America and Africa are now also ramping up their contribution.

(Note: Wiki-Solar quotes all its power figures using the AC output capacity of each plant, to enable direct comparison with other forms of generation. It has defined the capacity threshold for utility-scale solar at 4 MW — roughly equivalent to the 5 MW quoted above.)

The group at Wiki-Solar maintains information on all these plants with a database of over 4,000 projects. In this short series of articles, we will be analysing this data to assess the impact of the growing contribution of utility scale solar into the world’s energy markets.

The annual production of a solar power station is a function of the cumulative sunlight level on the panels, and the efficiency of the system, typically measured by the performance ratio. Global and continental average figures for these factors are shown in Table 2 on the next page. Unsurprisingly, each MW of capacity delivers less energy (MWh per year) in Europe than the equivalent in South America. The variations are even more marked when analysed by country. 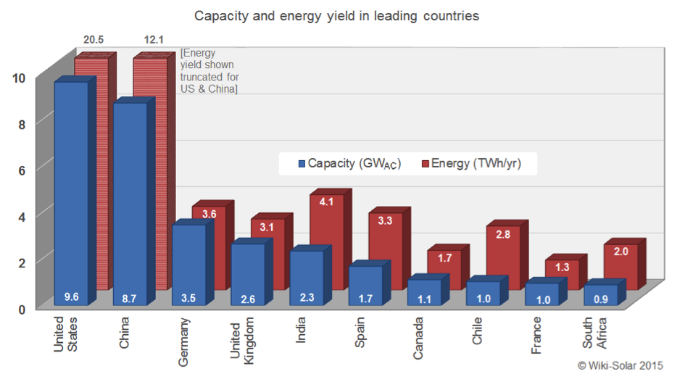 The higher yield in sunnier climates is illustrated in Figure 1, showing that Chile, India and South Africa all generate more energy than countries above them in the capacity table.

The yield figures quoted below are global averages across all systems. The variation between different solar cells types seems to be relatively minor. The array mounting approach, however, can have a significant impact on the annual energy yield. Overall, tracking systems achieve annual energy yields approximately 20 percent above the average. In practice there seems to be little difference between 1- and 2-axis trackers, although in theory the latter should give higher output.

How Much Energy Can We Produce, How Much Carbon Can We Save?

Table 2 shows continental and global averages of key data for utility-scale solar plant. The capacity, annual yields and performance ratios form the basis of the operating data illustrated in Figure 1 above.

Average emissions savings are primarily a function of the carbon intensity of traditional electricity production in the relevant regions. Similarly the households served and equivalent ‘cars off-the-road’ (also analysed but not presented here) depend on regional electricity usage and the carbon intensity of the vehicle population. The site density is discussed in the following section.

The final row of table 2 computes how much of each continent’s present electricity consumption is delivered by this utility-scale solar capacity. While California achieved 5 percent in 2014 (Wiki-Solar’s figures, based on 4MW+ as detailed above, give 4.5 percent for California, rather than the 5 percent figure published by the EIA, which was based on plants of 1MW+), the North American average was one tenth of this. Europe delivers a similar figure, with South America and Africa catching fast, and Asia not far behind. Remember these figures are only for utility-scale plants. Total solar generation, including rooftop systems is several times higher.

Site Area: How Much Land Would We Need?

The spacing between solar arrays has a direct impact on the site area required, but also on the energy lost due to shading at low sun angles. The optimum design is therefore a trade-off between these factors depending on location and site related costs. Higher angles of latitude would be expected to lead to a lower packing density.

In practice, as shown in table 2, the variation with latitude is not very noticeable; and the largest site areas appear to be in Africa. I anticipate that this may not be a true reflection of the longer term trend and that the extensive sites in South Africa, for example, are currently only partially utilised and may provide scope for later system expansion.

It is notable that at higher latitudes the ‘tracking gain’ exceeds the 20% global average, with tracking systems Europe delivering 50 percent more annual energy than the average.

We have also analysed site densities to confirm what many have already asserted — that high solar energy penetration presents no material threat to land usage. Table 3 below extends the figures from Table 2 to calculate what capacity would be required to deliver the entire current electricity usage of each continent — NB this is only a hypothesis, not a proposal. (Even we wouldn’t propose that utility-scale solar power is relied on for all the world’s energy; it is much better combined with other sustainable sources. Secondly: note that these figures are calculated only to replace existing electricity consumption. To match overall energy usage, including heat and fossil fuels, the figures would need to be approximately six times higher.)

To achieve this, total utility-scale solar capacity would need to increase by a factor of 300. At the recent historical growth rate of 70 percent compound, this would only take until 2025. The land area required is shown in the second row of this table and equates to at most one sixth of one percent (for Europe) and overall about one fortieth of one percent of total land area.

The Basis for the Figures in this Series of Articles

This analysis is based on the 2,500 operating projects in the Wiki-Solar Database. The capacities, annual yields, carbon savings and other data, are the design figures reported to national registration agencies or published by the owners, developers and contractors. This is purely design data actual measured output figures are not available to this analysis.