Dighton, Mass. — It’s not often that I hear about renewable energy installations near my hometown in Southeastern Massachusetts – many towns in that area seem to have a vocal dose of NIMBY-ism. So when I heard that auto-auction company Manheim was unveiling a 3.5-megawatt installation in Dighton, Mass., I jumped at the chance to go take a look and was pleasantly surprised at what I found. 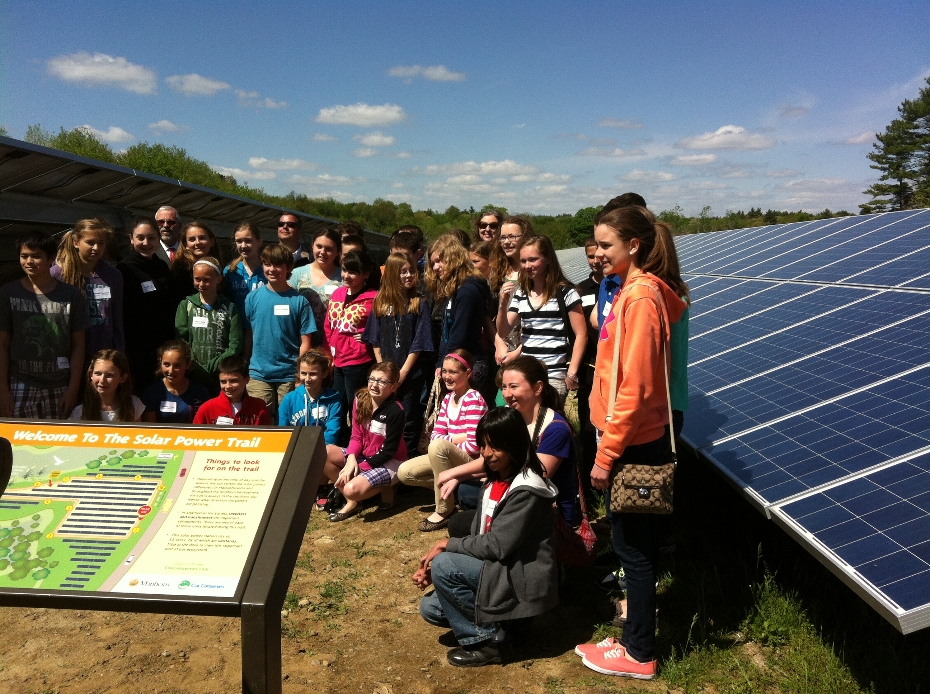 “Ahead of us are about 40 students, and they’re all learning about solar power right now,” said Aaron Brown, manager of engineering, alternate energy and business continuity at Cox Enterprises, which owns Manheim. We were walking the “Solar Power Trail” — a pathway marked with educational signs about solar energy and how it works, developed by Brown and others involved in the project. Brown says he and his team had so much fun developing the trail that it took them about two or three months to research some of the trivia. The trail was a refreshing sight for me and others who advocate about the importance of renewable energy education.

“We wanted to get kids thinking about it,” said Brown. “I drifted into sustainability in my career, and I like being here because it is important for the future, but kids should know about it now.”

Manheim is now collaborating with local school officials to integrate the solar installation into curriculums. Said Brown, “We want to create a next generation that feels very comfortable and knowledgeable about solar power.”

Not only is it the first major installation in the area, it is also built near 20 acres of preserved wetlands that a variety of species call home, including deer, coyotes and turkeys.  The permitting process took about two months, and “islands” of panels were built around the wetlands to not disturb them. Since the panels have been erected, Brown says, birds have been nesting in and around the racking due to the warmth of the panels.

“Governor Patrick [of Massachusetts] is doing so much; we want to engage these younger audiences, especially with the wetlands here. Its just a great example of how sustainability is working,” said Elizabeth Olmstead, communications manager at Cox.

Cox has a history of environmental awareness, and has established its “Cox Conserves” program which has set goals of zero waste to landfills in 7-10 years and carbon neutrality in 25 years. Cox executives have a motto to be “sustainably sustainable,” said Olmstead, which means that the company is not only practicing sustainability because it cares about the environment, it’s doing it because it makes business sense.

Said Manheim’s executive vice president and COO Janet Barnard: “In the end, the best businesses will be best caretakers of resources given to them.”

Manheim worked with local utility Taunton Municipal Lighting Plant (TMLP), and signed a 25-year power purchase agreement (PPA). According to Mike Corrigan of TMLP, Manheim is able to reduce their power costs with net metering. The power supply also “reduces loads, improves voltages, reduces transmission peaks during the summer months when the middle of the day peaks with the highest electricity prices.” This installation ultimately influenced three additional projects that will be fed to the TMLP grid, and the utility expects to have 13 MW of solar in its system by the end of year.

These installations are contributing to the booming solar market in Massachusetts, which recently surpassed its 250-MW goal four years early. Its new goal is to achieve 1.6 gigawatts (GW) by 2020 — a daunting feat, but many are confident due to the state’s blossoming green economy that has attracted numerous installations much like Manheim’s.

“We have not lost jobs – as a matter of fact we’ve actually increased jobs because of the commitment we’ve made to the green tech sector of the economy,” said Mass. Senator Mark Pacheco. The green economy currently account for more than 11 percent of the jobs market, with more than 5,000 companies and 72,000 jobs, which is expected to reach around 85,000 by the end of next year.

“This investment that is being made here is an example to all of us as to what can be done — we can be doing these types of projects in cities and towns all across Massachusetts,” said Pacheco. “What is taking place in our economy is significant — it is an exciting future for the next generation here,” said Pacheco.

The ceremony ended with a ribbon-cutting that included special guest Logan Rodriguez, a Fall River, Mass. student who won an award at a science fair for exploring how a solar panel could power her bedroom. Said Tim Hoegler, general manager of Manheim New England, “This is a great example of how young people are taking the initiative to drive conservation.”

Pacheco echoed Hoegler’s enthusiasm to the crowd. “We can choose to live in a future that has a Hurricane Sandy in it every year, or try to change that future and eliminate the worst effects of global climate change,” he said. “We can all take part in this, and we don’t have to sacrifice economy – this project is a perfect example.”