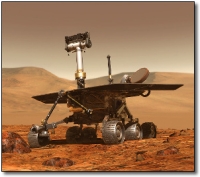 “Spirit,” the first of two NASA Mars exploratory rovers, that landed on January 4, has now taken its first steps on the Red Planet. From beaming back high-resolution pictures of the craft’s surroundings, to doing the complex work of a geologist in hopes of uncovering signs of life, solar photovoltaic (PV) power is essential to the Mars rover’s functions.

Sylmar, California – January 23, 2004 [SolarAccess.com] Despite communication problems in the last few days, the Mars rover has been a success for NASA which was well aware of the odds against even making it to the planet unscathed. Before this mission, less than two of three mars missions were successful. High-efficiency solar cells manufactured by Spectrolab, are providing power to the NASA-built spacecraft. Spectrolab, a Boeing subsidiary, supplied Improved Triple Junction (ITJ) solar cells for the Spirit rover’s journey to the Red Planet on a mission probing the role of water on Mars. Spectrolab solar cells will also power NASA’s “Opportunity” rover, scheduled to land on Mars January 24. Designing solar cells for space poses particular challenges. The solar cells aboard Spirit and Opportunity are called triple-junction cells because they employ a three-layered structure that more effectively captures and converts solar energy into electricity. Each of the junctions converts a different portion of the solar spectrum into electricity. Designing solar cells to perform for many years in the harsh environment of space is the most pressing challenge for designers of space-based solar PV, said Richard Esposito, Media Relations for Spectrolab. Whether powering Global Positioning Satellites circling earth, or making locomotion possible for a mars rover, space-based solar panels take a beating from the hostile environment of space where tiny particles can constantly bombard the craft. And not only do they have be durable, but extremely efficient for their size and weight. “ýthe spacecraft themselves usually afford a very limited surface area on which to mount the cells or panels, so cell efficiency becomes paramount,” Esposito said. ” However Mars’ great distance from the sun has an impact on that efficiency; cells that can attain a 26.8 percent conversion efficiency in a Geosynchronous Earth orbit would be about 10 percent efficient on Mars due to the greater distance from sun.” While the technology of these solar cells is designed for the heavens, it may find its way back to earth. Esposito said Spectrolab’s efforts in space-based solar have helped the company achieve record-breaking performance for terrestrial concentrator solar cells. Using concentrated sunlight, these PV cells can convert 36.9 percent of the sun’s energy to electricity, a technology capability that the company believes could dramatically reduce the cost of generating electricity from solar energy. “The modified cell design better suits the terrestrial solar spectrum and opens the path for higher performance terrestrial concentrators” said David Lillington, president of Spectrolab. “And because the terrestrial cell we have developed is similar to our conventional space cells, it can be implemented in production, and manufactured in very high volumes with minimal impact to production flow.” Every advance the company makes in their space-based solar could yield a terrestrial breakthrough. Something the entire renewable energy industry is waiting for. “There is considerable synergy between space and terrestrial cells, and improvements in space cells are expected to drive efficiency improvements for terrestrial cells,” said Dr. Nasser Karam, Spectrolab vice president for Advanced Technology. “During the last few years, multijunction solar cells have doubled the power output of large commercial satellites, and substantially improved their revenue-generating capability. We believe that further optimization of the improved terrestrial concentrator cells will yield the potential to surpass 40 percent conversion efficiency.” The two Mars exploration rovers were launched in mid-2003 to continue NASA’s quest to understand the role of water on Mars. NASA’s Jet Propulsion Laboratory built the $800 million pair of robots. Each rover’s first action is to unfold its solar-array panels, allowing the solar panels to recharge the rover’s batteries. The solar panels were folded to fit inside the rovers for the trip to Mars. Once on the Martian surface, the solar panels deployed to form a total area of 1.3 square meters of triple-junction solar cells. The solar cells power all the activities and instruments of the spacecraft. The rovers feature panoramic cameras at human-eye height, and a miniature thermal emission spectrometer with infrared vision to help scientists identify the most interesting rocks. Assuming NASA is able to reestablish communication with Spirit, the rover will extend an arm and a microscopic imager will give scientists a close-up view of the rocks’ texture and composition. Another tool will expose the interior of the rock. The second of the two rovers has the same capability. Spectrolab solar cells have powered more than 500 satellites and interplanetary missions during the last 40 years. Today, Spectrolab multijunction solar cells generate more than 325 kW of power on orbit. Cells representing another 800 kW of power are awaiting launch.