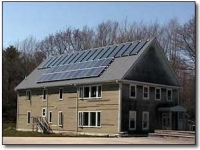 Bangor, Maine [RenewableEnergyAccess.com] If Naoto Inoue, President of SolarMarket, a solar systems installer based in Arundel, Maine, managed to sell four solar energy systems in a month, he knew they were doing well. But last Friday, in just one day, his company sold three solar thermal systems and one solar electric system. And he’s sure it’s all thanks to a new solar rebate program signed by the Governor last week.