More
Home Solar Lighting Up the Road Ahead 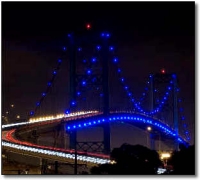 Los Angeles, California [RenewableEnergyAccess.com] With its bullish state incentives and near-constant sunshine, California has come to represent roughly 80 percent of the U.S. solar market. That makes it all the more appropriate that the official welcoming monument for the state’s largest city is now illuminated by 160 energy efficient LED lighting fixtures offset by their solar electric system.