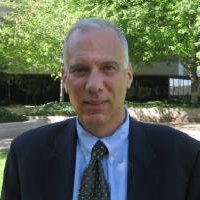 Hawaii, United States [RenewableEnergyWorld.com] Hawaii faces intertwined threats from global warming and dependence upon imported oil supplies. The threat from climate change is summarized in the recently released report of the United States Global Change Research Program. Rising atmospheric temperatures portend more frequent, stronger tropical storms, threaten to erode beaches, submerge beachfront properties, and alter Hawaiian agriculture and tourism in a state where tourism, agriculture, and property development accompany the military as the main pillars of the economy. Fortunately, Hawaii possesses the clean energy resources to do its share to combat global warming and in the process, help ameliorate the threat it faces from reliance upon imported oil.

Hawaii depends upon the burning of imported oil to generate over 80 percent of its electricity supply, orders of magnitude more than any other state in the nation. The islands are likewise wholly dependent upon oil imports for the gasoline that fuels their cars and trucks. The risk of this dependence is three-fold.

Much of Hawaii’s oil comes from Indonesia, and there is no easy way to supply the islands should geo-political events interrupt tanker shipments — via pipeline, rail or truck, as would be possible on the mainland. Second, tightening oil markets are raising household and business costs in a state that the Energy Information Administration pegs as having the highest electricity rates in the country, at almost twice the national average. Third, of course, current global oil consumption rates are unsustainable and supply is unlikely to be sufficient to satisfy global demand in 50 years time or sooner.

The Aloha state’s answer is the Hawaii Clean Energy Initiative, an agreement entered into by the state and U.S. Department of Energy in January 2008 and augmented by an October 2008 agreement between the state and the island’s investor owned Hawaiian Electric Companies (HECO). The initiative calls for Hawaii to derive 70 percent of its power from energy efficiency and renewable energy by 2030.

Headway is being made on the energy efficiency front. Utility rate decoupling is ready to go into effect and a proposal before the state Public Utilities Commission will institute time-of-day pricing. Increasing efficiency through conservation is expected to meet 30 percent of the initiative’s 70 percent clean energy goal.

Renewable energy will account for the other 40 percent — double what was called for under Hawaii’s previous renewable energy portfolio standard and twice what California has targeted. A huge step in this direction will occur in 2010, when all newly constructed homes in Hawaii will be required to have rooftop thermal solar panels installed. If the state were to take this to the next level, it would consider requiring existing homes to install thermal solar panels at time of resale, since preexisting homes will continue to account for the overwhelming majority of the islands’ building stock for many years to come.

Ormat currently generates 30 megawatts (MW) of geothermal electricity on the big island and is looking to expand this.  Additional renewable energy will soon arrive by sea, where Oceanlinx seeks to 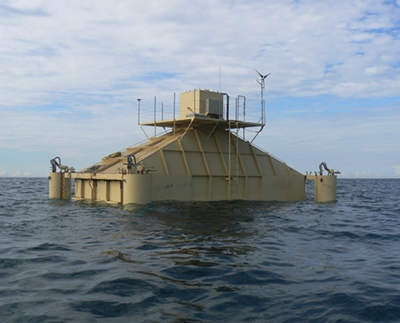 capitalize upon Hawaiian waves — among the most powerful in the world — and generate 2.7 MW of electricity with deployment of its proprietary OWC wave-driven compressed air turbine buoy technology (image, left). The $20 million project is projected to be operational in 2011.

The shear size of the footprints of most utility-scale solar projects make them unlikely to be developed in Hawaii, however the PUC is likely to approve an application from HECO under which the electric company would purchase up to 16 MW of energy from PV panels to be installed by merchant developers on the roofs of flat-topped industrial and government warehouse buildings in Honolulu.

Estimates place harvestable wind energy in Hawaii at 1000 MW, however the majority of this is on Maui. While wind turbines can easily be inter-spaced on agricultural land, getting this power to Honolulu, where most of the demand is, will require that view corridor concerns be overcome.  It will also require the installation of an expensive underwater 400-MW inter-island transmission line.

To bolster demand for these clean energy resources and further its transition from oil dependency, Hawaii is working with Silicon Valley entrepreneur Shai Agassi’s Better Place electric vehicle venture to install an array of battery swap stations on Oahu. This makes a lot of sense for Honolulu and Oahu, where travel distances are not long and can be manageably addressed by the mileage limits of current electric vehicle propulsion.

It has been estimated that buildings utilize one-third of electricity consumption in the U.S. and generate an equivalent amount of total green house gas emissions and, as is the case in most cities, downtown Honolulu is stacked with hi-rise commercial office, hotel and apartment buildings. LEED green building credits earned by increasing building energy efficiency, tapping alternative transportation and utilizing on- and off-site renewable energy can reduce buildings’ energy consumption by up to 50 percent and GHG emissions by up to 70 percent. Honolulu already requires new publicly owned buildings to be LEED certified.

Enacting a fee-bate system similar to that under consideration in Portland, Oregon could boost demand for clean energy among privately owned buildings.  In this plan new buildings and those undergoing upgrades that meet state energy standards would pay a building-permit fee while buildings that attain higher levels of LEED certification pay no fee or receive a fee rebate. 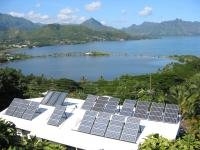 Hawaii is doing the right things, and should continue to broaden and deepen its clean energy efforts. Doing so can help ensure that as the tide of global warming washes ashore, Hawaii is positioned to have its boat lifted and become the most energy independent state in the nation.

Matt Slavin is president of Portland, Oregon based Sustainability Consulting Group. He recently visited Hawaii to research his book ‘The Triple Bottom Line: Sustainability Principles, Practice, and Perspective in America’s Cities,’ to be published in 2010.