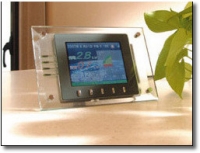 Econonavit, Kyocera Corporation’s monitor for domestic solar power generation, received the Good Design Award 2003, which is sponsored by Japan Industrial Design Promotion Organization (JIDPO). Econonavit received commendation for many aspects, including its good design concept, its novel representation of information, its innovative lifestyle features, its ecological design, and its ability to blend with house interiors. It is also regarded as a design to promote future technology.

Tokyo, Japan – November 12, 2003 [SolarAccess.com] Econonavit is a monitor, which displays in real time the data of the power generated by the domestic solar power generation system, as well as the data relating to power consumption in the house. Kyocera reports that Econonavit is the first device of its kind in the industry to feature wireless data transmission, which enables it to be set at any location in the house, such as on a table or a wall. The screen incorporates a color liquid crystal display (LCD) that shows a variety of menus in color graphs and animations, such as a comparison of annual, monthly and daily data, a conversion of environmental indicators and memorial display. According to Kyocera, the design of the Econonavit blends well with any interior and the display is clear and easy to see. The wide range of contents and user functions makes the Econonavit a new solar power generation device that creates a new relationship between solar power generation systems and the family. The data transmission unit receives the power generation data from the power conditioner while it receives the power consumption data measured by the current sensor in the residential power distribution panel. This data is transmitted wirelessly from the transmission unit and is displayed on the main unit of the monitor. Kyocera reports that unlike the conventional indoor wall fixed monitors, the use of wireless data communications system makes it possible to use the unit anywhere in the house. As the monitor is designed to either hang on a wall or stand on a desk, it can be installed anywhere the user prefers. The monitor is equipped with a 4.7-inch color liquid crystal display (LCD) that provides a clear display of rich colors. Users can select one of three types of wallpaper according to their preference. The monitor displays the amount of power generation and the status of buying and selling power — and also the real-time power consumption of the household. Kyocera said that this feature is designed to improve a family’s awareness of power consumption in the house, and encourages will family members to take voluntary action to reduce the consumption of energy. The environment monitor screen displays the converted data of the amount of generated power as a reduction in CO2 generation and a reduction in oil consumption, enabling users to know how much they are contributing to environmental conservation. The monitor features animations, such as an illustration showing afforestation accompanying CO2 controls and the mileage of an electric vehicle, to represent the users’ contributions to environmental conservation. Messages and animations notify a user of the anniversary of starting solar power generation and of days of special achievement in reaching certain levels of integral generated power.