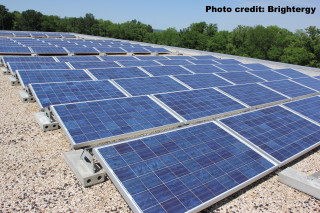 Kansas City, MO, has neither the abundant sunshine nor high cost of electricity that have driven solar installations in other cities. Despite this, the city has close to 1.5 MW of solar in 59 separate installations on municipal properties. Thanks to utility rebates, two department leaders, and a unique opportunity that allowed it to access the 30% federal tax credit, the city was able to make solar work in an otherwise challenging climate of modest sun and low electricity prices.

In April, ILSR’s John Farrell interviewed Charles Harris, project manager with the Kansas City. Harris suggested that the project got its start in 2006, when the city established a Climate Protection Plan to reduce greenhouse gas emissions from municipal buildings while getting 15% of their energy from renewable sources.

Like many municipalities, Kansas City feels cash strapped, Harris said. So when Kansas City Power & Light (KCP&L) offered a $2 per Watt rebate for solar, it became very attractive for the city. After negotiating with two city departments, KCP&L and Brightergy agreed to buy the solar materials, install them on the buildings, and guarantee a certain amount of solar production for the city. In return, the city entered into two separate 20-year leases with the companies, each requiring no money upfront, with the monthly lease amount based on a guaranteed amount of energy produced.

While the rebate from KCP&L amounted to $50,000 per system, it was also a limiting factor for solar installations. The program capped the size of rebate-eligible projects at 25 kilowatts (kW), so none of the city’s 59 solar arrays exceeds that size. In a followup email to the interview, Harris said there was a possibility of putting another 330 kW of solar on the buildings with solar, if there was no installation size cap for the rebates.

Other limitations in finding solar-suitable buildings included small roof space, low building energy usage, and the short offer period of KCP&L’s rebate. The building energy usage problem reflects a policy issue. Under Missouri net metering rules, the city cannot aggregate its building energy consumption, allowing it to use a solar array on an operations building to offset energy use at city hall, for example. This policy, aggregate net metering, is available in 17 states. Missouri also lacks virtual net metering, allowed in 11 states, permitting cities (and other entities) to offset energy use on its buildings with solar installed anywhere else in the utility’s service territory.

In the development of the Public Rooftop Revolution report, the regional government for the Kansas City metro area—Mid-America Regional Council—modified its solar suitability map to identify rooftop solar potential on city-owned buildings. Their map, shown below, indicated that the city could install nearly 70 megawatts of solar on its buildings. 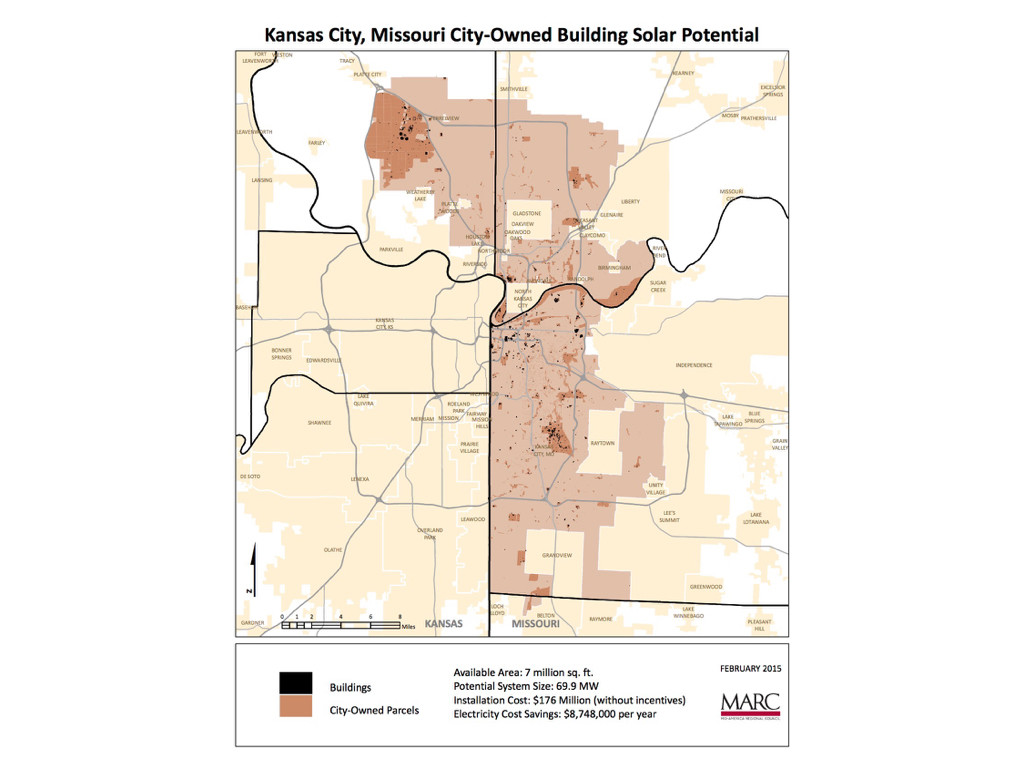 John asked Charles if that was a reasonable number for city building-sited solar installations. Harris didn’t know where that number came from, but his first thought was that the city didn’t own that many buildings. In a followup email, Harris took a look at our map of 70 MW of solar potential for KC’s city-owned buildings and concluded that well over 90% of the buildings would not be right for solar. The reasons for this run the gamut: vacant buildings, vacant parcels of land, structural integrity, surrounding geometry, not enough utility use, among others.

The Keys to More Solar

If there were more opportunities for rebates, Harris intimated that his department, General Services, might interested in more solar for their 140 buildings. A new LEED building requirement will likely increase interest in solar for new or renovated municipal buildings. There are other departments where solar facilities could be viable, too, if the rebates were available again.

The rebates were clearly the most important component in making solar viable, according to Harris. Interestingly, even though the installation cost of solar in many places is now less than $3.00 per Watt for similar rooftop projects, Harris said in a followup email that anything less than the $2.00 per Watt rebate would not meet the financial goals of KCP&L and Brightergy. This remains confusing since the utility and developer would both presumably be able to access the federal tax credit and depreciation benefit, cumulatively worth about $1.50 per Watt on a $3.00 per Watt installation.

The initiative for solar in Kansas City was mostly the city departments. Although city council has its renewable energy advocates, it was the two city departments that came up with the deal with KCPL and Brightergy, and that pitched the deal to the other departments

Harris said that one of the most important things is that everyone has a chance to buy in. Every department in the city was given the opportunity to get in on the deal with whatever buildings they controlled, but only two followed suit. The end result has been a winning deal for his department, Harris said.

“Because we’re saving in the amount of energy we’re getting from our local utility, it’s worthwhile.”

Kansas City’s experience with solar included a single, substantial program across numerous government buildings, as well as a few smaller projects. It’s unclear whether the city has much opportunity to expand its solar investment, particularly given the constraints of the state’s net metering policy and lease providers with apparently very high financial requirements.

To learn more about solar efforts in Raleigh and other cities, read our Public Rooftop Revolution report, highlighting the remarkable opportunity for solar on municipal rooftops.

This is the 25th edition of Local Energy Rules, an ILSR podcast with Director of Democratic Energy John Farrell that shares powerful stories of successful local renewable energy and exposes the policy and practical barriers to its expansion. Other than his immediate family, the audience is primarily researchers, grassroots organizers, and grasstops policy wonks who want vivid examples of how local renewable energy can power local economies.

It is published twice monthly, on 1st and 3rd Thursday.  Click to subscribe to the podcast: iTunes or RSS/XML