More
Home Solar Jobs and Gigawatts: How To Position Your Solar Company In Light Of... 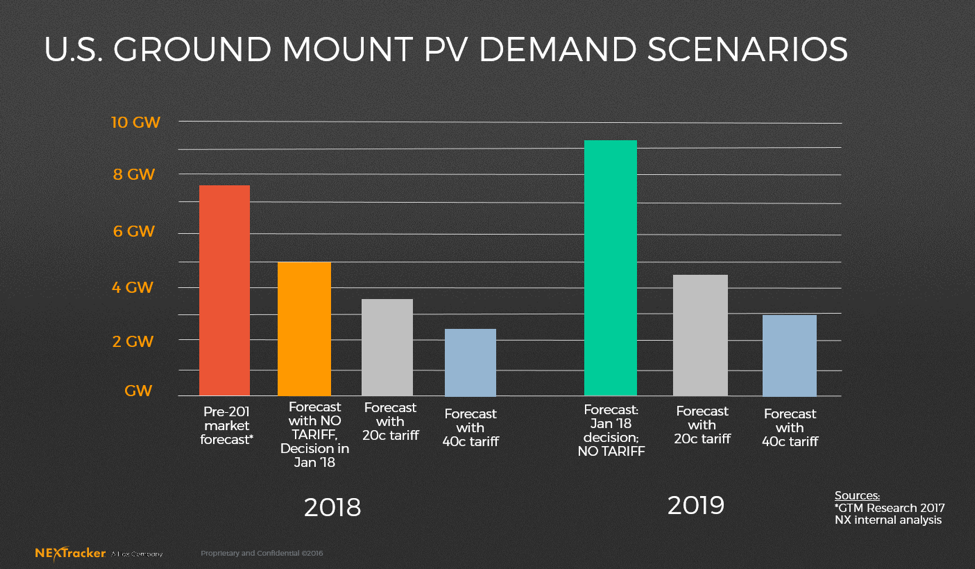 How should you position your solar company in light of the Suniva/SolarWorld trade case? To address that question, I recently participated in a Renewable Energy World webcast with Abby Hopper, president of the Solar Energy Industries Association, and Matthew Nicely, a lawyer representing SEIA. For NEXTracker, our position is clear: We fully support SEIA’s efforts to convince the U.S. International Trade Commission to recommend the least harmful remedy, for two simple reasons: jobs and gigawatts.

As I outlined in our presentation (which you can view here), SEIA cites an analysis that projects that up to 88,000 jobs could be lost in installation and U.S. manufacturing jobs if the harshest tariff of 40 cents per watt is recommended and imposed by President Trump. What’s more, ground-mount solar PV installations alone could drop from a projected 9 GW capacity in 2019 without tariffs to 3 GW with tariffs—a dramatic loss of renewable energy that will significantly slow America’s transition to a cleaner and more modern grid while lowering energy costs for American consumers. 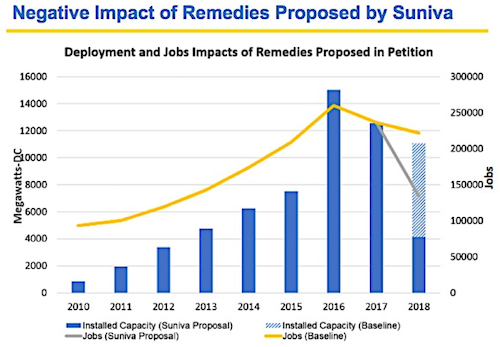 Since our webinar on Sept. 28, Suniva has slightly lowered its remedy of a minimum floor price from US $0.78 for modules with foreign cells to US $0.74. SolarWorld has also amended its suggested remedy — not in a constructive direction — suggesting an import cap of 220 MW for cells and 5.7 GW for modules in 2018, a solution that will constrain the supply of solar panels available in the United States and further delay projects. That is really an atrocious proposal.

With either of these suggested remedies, U.S. solar installers, manufacturers throughout the value chain, developers and supply partners will be negatively affected, jeopardizing more jobs than could ever be created by SolarWorld and Suniva under a temporary penalty. With draconian protectionist tariffs, they might create a few hundred jobs. The rest of the industry will lose tens of thousands.

We also question if any tariff or import cap will make SolarWorld or Suniva profitable. As I testified to the ITC on Aug. 15, NEXTracker tried to support SolarWorld with a $32M purchase order for 156,000 solar panels. SolarWorld failed to deliver this order on time and to our contract’s specifications. When they delivered a partial order, SolarWorld manufactured in Thailand, not in Oregon.

To make SolarWorld and Suniva’s U.S. factories more competitive, and to provide a real and sustainable fix to this trade imbalance, trade wars and higher solar cell prices are not solutions. These companies need adequate capital, manufacturing facilities of large scale and differentiated products. They don’t have those key ingredients, unlike successful U.S. manufacturers like First Solar.

We should maintain free trade for solar products on a global basis. If specific companies in specific countries are found to be dumping, measured and balanced antidumping and countervailing duties are appropriate in specific cases, but not across-the-board protectionist tariffs. The ITC could also recommend that the United States provide Suniva and SolarWorld manufacturing and technical assistance from the National Renewable Energy Laboratory with its technology licensing program. U.S. module companies First Solar and SunPower have already benefited from this same type of assistance, allowing them to be more competitive.

In addition, with both Suniva and SolarWorld in bankruptcy, they face significant difficulties in obtaining capital. Instead of tariffs that benefit the U.S. Treasury and hurt the larger solar U.S. solar industry, the companies could receive direct financial support by receiving revenue from import license fees, under a recent SEIA proposal to assist domestic PV industry.

The ITC will make a remedy recommendation to the president on Oct. 31. Between now and then, the commissioners will have a hearing from stakeholders on both sides of the issue. Here’s what you can do to make your voice heard.

First, if you’re not already a SEIA member, please become one. This is not SEIA’s first regulatory or trade battle, and there will be more battles to come. I’m proud to be on SEIA’s board of directors, and I urge other solar CEOs to get involved and lend your support for all that they do on behalf of solar contractors and the U.S. manufacturing sector. A series of meetings is happening with SEIA leadership in D.C., and you can be part of them.

Second, SEIA is a unified solar voice, but it should not be our only solar voice. Whether or not you’re a SEIA member, write to the four commissioners. Let them know how your solar business has been affected by the complaint, and how a trade war and higher solar panel prices may further affect your company and employees.

Third, you might also share the commissioner email addresses with your employees and suggest they individually contact them. In their own words, your employees can simply tell the commissioners about their job in solar and ask them to find a Section 201 remedy that will avoid significantly raising solar module prices and delaying projects.

Finally, we are supporting a joint SEIA and AWEA effort to organize a national solar and wind jobs tour, and to get the word out regarding our amazing U.S. manufacturing and jobs story.  Learn more here.

Thank you in advance for supporting SEIA and our collective efforts to avoid the worst outcomes from this trade case.

Editor’s note: Many questions were asked during the webcast and we were not able to address them all verbally so we’ve posted an article answering the most pressing questions. Check it out here.