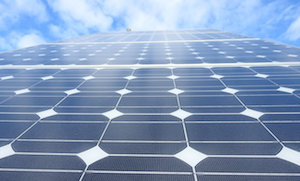 JinkoSolar Holding Co. is poised to become the latest solar-industry leader to learn coming in first doesn’t always make you a winner.

Jinko had 6.5 GW of panel-production capacity at the end of the third quarter, and said full-year 2016 shipments may be as high as 6.7 GW. That means the No. 3 solar company is poised to vault to the top of the list, surpassing Trina Solar Ltd. and Canadian Solar Inc., the two biggest suppliers by shipments in 2015. None of these companies have set dates to release 2016 results.

Being biggest isn’t always the best in the solar industry, especially if that growth comes with a lot of liabilities. Jinko’s total debt more than doubled to $2.7 billion at the end of the third quarter over the past two years. Panel demand around the world was climbing as the company was building new manufacturing lines, but now that they’re in production, the industry is slowing and prices have slumped to an all-time low.

Jinko ramped capacity 51 percent last year through September as solar demand began slowing. That’s particularly true in China, one of the company’s biggest markets, where the government is curtailing subsidies and power consumption is stagnating. Clean-energy installations worldwide will increase this year at the slowest pace in a decade, according to Bloomberg New Energy Finance, and demand for solar power will slow, after a flat 2016.

It’s a familiar story: solar manufacturers — especially in China — borrow heavily to expand capacity, see the market slump and push ahead with the expansion strategy anyway.

“That’s the MO of these companies,” said Gordon Johnson, an analyst at Axiom Capital Management in New York.

During periods of corrections or downturns, Chinese solar companies have often focused on cutting costs and lowering prices in a bid to gain market share, at the expense of profit, said Angelo Zino, an analyst at CFRA Research in New York.

“You could call it bad timing — or bad management,” he said.

“You need to take a prudent and rational approach to capacity-increase efforts,” Zino added. “The winners are the ones that tend to be diligent, more nimble and that focus on balance-sheet management.”

And the losers are the companies that can’t generate enough revenue to cover their debts, even if they have to cut costs to drive shipments.

“Being the biggest often requires you to sell at low margins or negative margins,” Chase said. It’s a pattern the industry has seen before.

Germany’s Q-Cells SE, once the world’s biggest panel company, filed for insolvency in 2012 after losing market share to lower-cost Chinese rivals. Suntech Power Holdings Co., which also held that title, racked up $2.2 billion in debt by 2012 and was pulled into bankruptcy after failing to make bond payments. It was succeeded by Yingli Green Energy Holding Co., which hasn’t reported annual profit since 2010 and failed in May to make payments on some of its $1.7 billion in debt.

While panel sales are slowing in the established markets like China, the declines may be offset by gains in emerging markets, said Brad Meikle, a San Francisco-based analyst at Craig-Hallum Capital Group.

“For the last eight years, analysts have continually underestimated the potential of new markets,” he said in an interview. “Right now, we’re at the crossover where non-OECD countries are becoming a greater portion than OECD countries.”

Those markets may justify Jinko’s investment in manufacturing. “Jinko is doing the right thing,” he said. “The industry is turning the corner.”

“For Jinko, they have to believe that their cost reductions outweigh the disadvantages of taking on more debt to build new factories amid the oversupply,” she said. “That’s been dubious for many of these companies.”