New Hampshire, U.S.A. — Try not to act surprised that the familiar Chinese suppliers still sit atop the list of solar photovoltaic (PV) module shipments in 2011, though one is making a stronger push to keep up with the others.

Suntech kept its top rank, which it snatched from First Solar in 2010, back when Chinese suppliers were still making a name for themselves. (Since 2Q11 the Suntech-Yingli-Trina triumverate has owned these rankings; today, only one non-Chinese manufacturer is in the top 5.) Suntech supplied more than 2 gigawatts of modules in 2011, an industry first, and eight of the 10 largest suppliers grew shipments by 10 percent or more. Most, however, saw a slowdown during 4Q11 (notable exceptions were Canadian Solar and Trina), despite a surge in Germany because of high inventory levels. Jinko also stands out with its eye-popping rise up the charts, more than doubling shipments during the year.

“2011 claimed a number of victims, but nearly all of the top-10 suppliers grew their shipments and collectively they accounted for nearly half of total industry shipments,” noted IMS Research senior market analyst Sam Wilkinson. 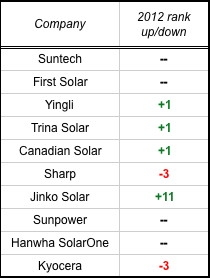