San Diego, Calif. — Changing government policies may cast a shadow over growth of the Japanese PV market. With the strong national government-supported residential rebate and feed-in tariff (FIT) programs, the Japanese PV market has accelerated its growth and is re-emerging as one of the world’s top markets. Past performance, however, is not a guarantee of future success as has often happened in the PV market.

The Japanese federal government is ending the national residential PV subsidy program. The program started 20 years ago and laid a strong foundation for the world’s largest residential PV market. When the program closes its door in March 2014, it is expected to have solarized over 1.5 million residential roofs, or added about 6 GW-worth of PV capacity, in Japan.

Japan initiated solar technology R&D and field testing under the “Sun Shine Project” after the 1st Oil Shock of the 1970s. The Project was to bring a safe, stable energy supply to the nation. As part of the Sun Shine Project, the government launched the Residential PV System Dissemination Program in 1994. 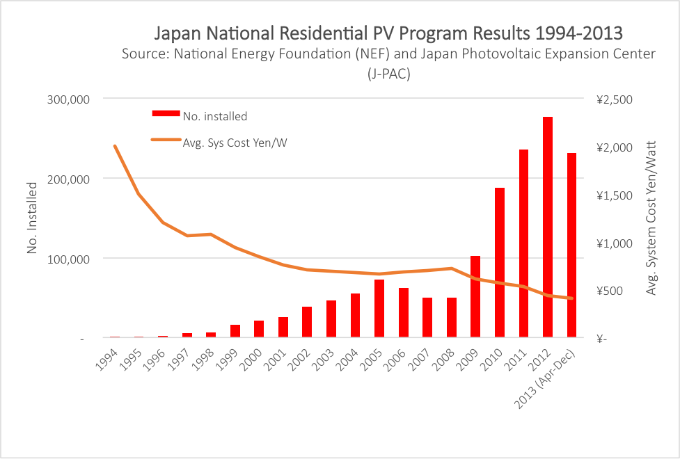 Between 1994 and 2005, this program funded close to 300,000 residential PV systems. During this period, Japan dominated the world PV market in terms of both installation and production. The average residential PV system cost was greatly reduced to ¥661 per watt even with an incentive rate of just ¥20 per watt (or 3 percent of the system cost). At that point, the federal government concluded that the domestic PV market became self-sufficient and discontinued the residential incentive program.

In the meantime Germany and a few other countries expanded their share of the market by infusing national FIT policies. In 2006, Japan faced its first market contraction.  The domestic market suffered not only from the lack of incentives, but also lack of modules since domestic module makers shifted their focus to Europe for greater demand and better profits.

To stop the domestic market from further decline, the federal government brought back the residential PV incentive program in January 2009 with an incentive rate of ¥70 per watt.  The domestic PV market was revitalized and Japan celebrated its one million solar-roof installations in April 2012.

According to data published by the Japan Photovoltaic Expansion Center (J-PAC), the program supported 276,051 residential PV system installations during fiscal year 2012 (April 2012 to March 2013). Although the program is closing its door for good in March, the number of applications submitted for fiscal year 2013 is less than the previous year.

The Ministry of Economy, Trade and Industry (METI) approved close to 25 GW worth of PV systems under the FIT program between July 2012 and October 2013. Systems sized over 1 MW represented about 60 percent of the approved systems. While many large-scale PV projects became successfully operational, a large portion of the approved systems still remains uncompleted.

Last October, METI began investigating the causes of the low completion rate, including possible intentional delays by project developers or owners who are waiting for further reduction in cost of components and labor to improve project returns.

The agency mandated project status reports to FIT applicants who reserved the FY2012 FIT rate (¥42/kWh) between April 2012 and March 2013 for a system sized over 400 kW. Out of 13.3 GW (or 4,699 systems), METI found that only 8 percent of the FIT-approved PV capacity has become operational as of this January. In fact, 4.7 GW worth of the approved projects have neither selected a sit nor placed a purchase order for the equipment.

In a separate survey, METI found that the average installed cost of systems greater than 1 MW increased to ¥305 per watt in the fourth quarter of 2013 from ¥280 per watt in the same quarter in 2012. This increase is due partly to higher priced imported components because of the yen’s devaluation and the rise of domestic installation costs. 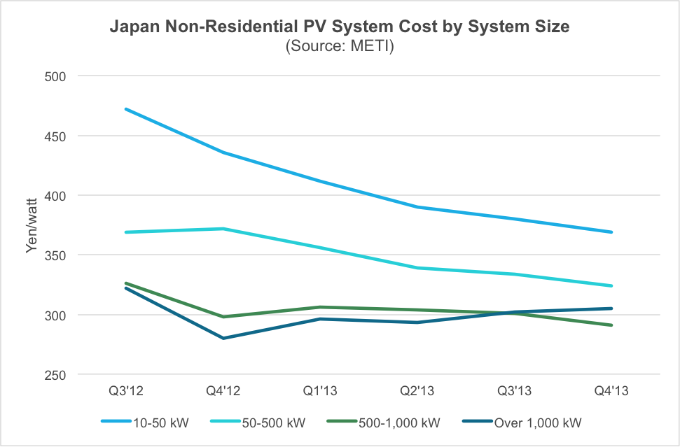 Another reason that non-residential system costs have not decreased quickly is that system integrators, or EPCs, do not have a strong incentive to lower their prices. This is because so many PV projects with the FY2012 FIT rate (¥42/kWh) remain uncommitted and those projects are expected to provide better profit margin than the projects with FY2013 FIT rate (¥37.8/kWh).

He and other committee members also suggested METI to consider different FIT rates for such as small, medium and large-scale, non-residential systems, instead of current one rate for all non-residential systems. A project developer speculates new rates to be ¥36/kWh for systems below 50 kW and ¥32/kWh for systems above 50 kW while other developer said that the government will not change the current one-rate structure for the new fiscal year.

METI will announced the new rates sometimes in March.