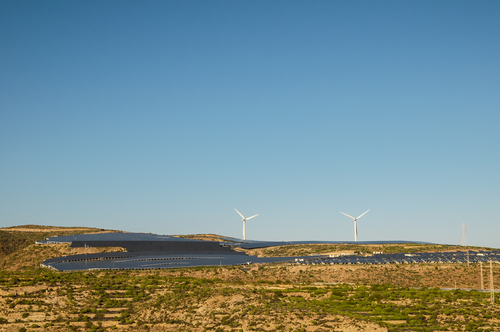 The recent growth in utility-scale solar has been explosive in relative terms. Because the start point was so low however, this still represents a small proportion of global electricity generation — about one third of 1 percent as last month’s article showed. This will grow dramatically if the growth rate is maintained; and that in turn will require solar to become ever more competitive with other generation technologies.

A substantial proportion of the capacity installed to date has benefitted from incentive regimes such as feed-in tariffs, investment tax credits and renewable portfolio standards; but these are being progressively phased out.

This month we analyse Wiki-Solar’s database of 5 MWp+ PV stations to estimate the comparative cost of solar energy and see where and when it is able to compete unsubsidised.

The capital cost of the 95 GW of planned and operational projects on the Wiki-Solar Database averages $2.7 million per MWAC of capacity. This has changed substantially over time from $8.5 million per MWAC in 2008 to under $2 million in 2015, as illustrated in figure 3 below.

Costs also vary regionally. This is partly because of factors such as local supply, access and logistics; but a part is also attributable to the ongoing cost reductions, as noted below.

Because the operating expenses of solar generating stations are relatively low, the cost of the energy they produce is determined primarily by the capital value of the plant and its annual output.

How Does This Feed Through to the Cost of Energy?

The following analysis derives a simple assessment of the levelised cost of energy (LCOE). Although the calculation is relatively superficial, it is adequate to provide a comparison of the potential in different regions of the world.

Solar generating stations typically have a planned operating life of 20 to 30 years. Given that the major cost item is depreciation, this would equate to 5 percent of the capital cost, if amortised over 20 years. As a first approximation I have doubled this, to allow for the costs of financing, site lease, maintenance and other operational factors. This leads to an indicative levelised cost of energy calculated as 10 percent of the capital cost divided by the annual plant output.

Average capital values, and energy yields in different parts of the world are shown in Figure 1 together with the derived levelised cost of energy. Note that average capital values are historical and therefore look higher in early adopter regions, such as Germany and Canada; than in those countries where most of the installations are recent, including the U.K.

Assuming that solar system costs continue to fall, so too will the cost of energy.

The Holy Grail of Grid Parity

The expression “grid parity” is used by the sector to describe the point at which the levelised cost of solar energy matches the market price of electricity, without the need for subsidy or incentives. When considering utility-scale solar generation, we look at ‘wholesale grid parity’; in other words the point where solar competes with the bulk price of traditional forms of generation. Rooftop and distributed systems on the other hand would typically compete at ‘retail grid parity’; when the output cost matches the price the consumer pays for electricity.

Grid parity depends not only on the levelised cost of solar energy (itself a factor mainly of capital cost and irradiance level), but also on the prevailing cost of electricity. Figure 2 illustrates the electricity prices and solar energy costs in the world’s ten leading markets for utility-scale solar. 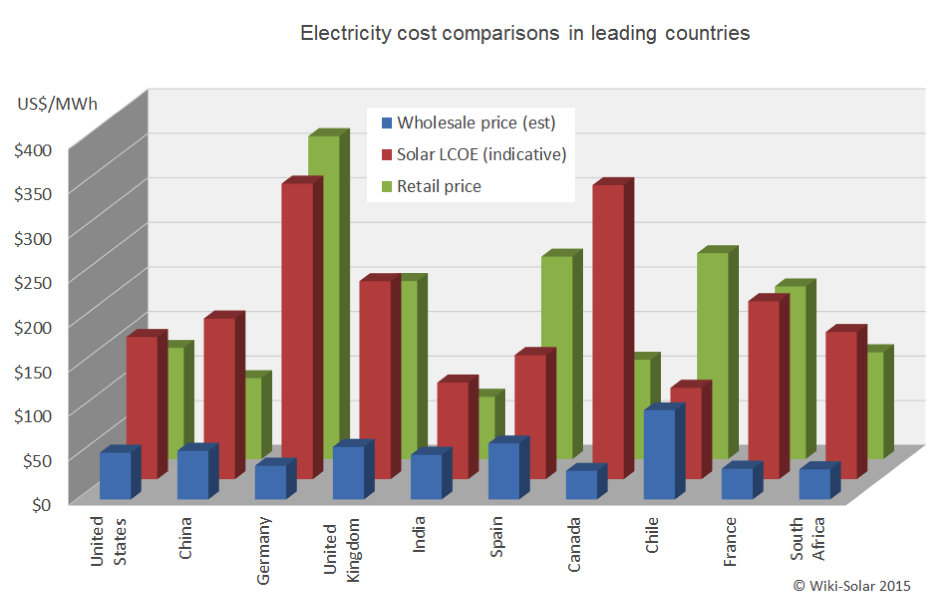 Retail electricity prices are widely available, and these are shown in green. Note that the regional variations reflect not only differences in the cost of electricity production, but also the extent to which different countries adopt carbon pricing and wish to subsidise electricity prices.

Wholesale electricity costs, shown in blue, are less widely published, so there may be some discrepancies in these figures. Note however that that countries without a fully integrated transmission network will not have a homogeneous nationwide figure; for example the electricity costs on Chile’s northern grid are typically above the national average.

The derived cost of solar energy shown in red reflects the levels of solar radiation in different countries and capital cost factors discussed above.

Of the ten nations shown, only Chile appears to have achieved wholesale grid parity, having indicative solar cost marginally below the wholesale electricity price. It is also notable that the cost of solar may be close to or below the retail electricity price in countries where this is relatively high, such as Germany and Spain.

Chile was the first major market to achieve solar grid parity because of a “perfect” combination of high irradiance figures and high traditional electricity prices. It is unsurprising therefore that several unsubsidised large scale solar projects have now been built in the country.

Finally we can use the same analysis to project when grid parity might be achieved in other countries. This analysis is illustrated in figure 3 below. 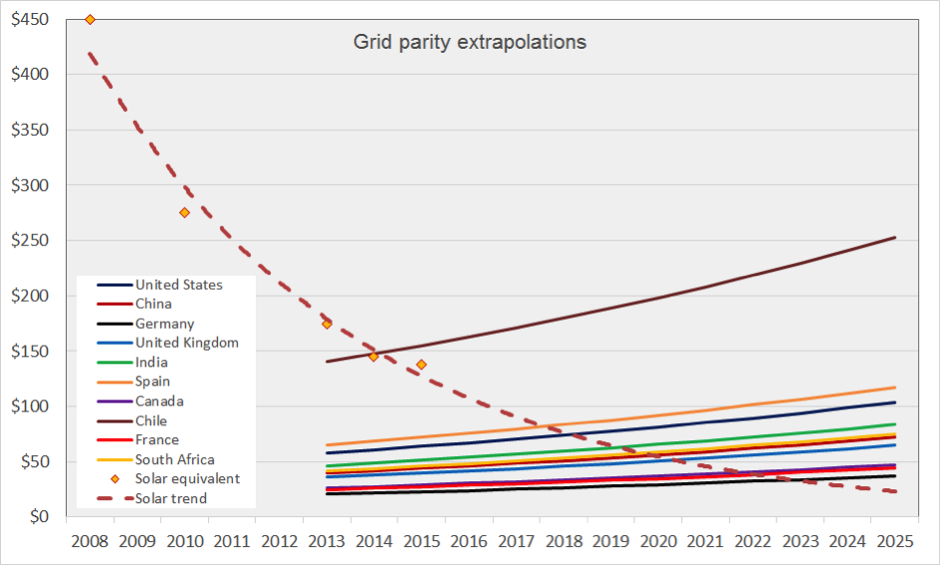 The cost of solar energy is calculated using the methodology above and based on the global average energy yield of 1.89 GWh per MWAC (as shown in figure 1). Historical figures for selected years are plotted and then extrapolated exponentially into the future. This curve can then be compared with the projected wholesale electricity prices in the various markets.

To enable all these figures to be consolidated onto a single graph, we have adjusted the figures to take into account relative yields under the respective solar regimes. For example comparative energy prices are adjusted downwards in Europe where the solar radiation is below the global average, but upwards in South Africa and India. We have not varied solar capital costs regionally, so these are projected on the basis of a uniform global market. A notional 5 percent inflation has been factored in to traditional energy prices to allow for rising fossil fuel and carbon prices.

The projection indicates that grid parity should be achieved in Spain, the United States and India within the next few years. China and South Africa get there in about 2020; with all the other countries following on in the early years of the next decade.

It should be noted that this analysis has been undertaken with less than scientific rigour! In addition to the many vagaries described above, there may be substantial variations from the historical national average figures we have used. In particular there will be notable regional variations within countries; and we will be exploring some of these in next month’s article.

The Basis for the Figures in This Series of Articles

This analysis is based on the Wiki-Solar Database, which details 40 GWAC of solar capacity in 2,600 operating plants and a further 1,200 planned projects totalling 55 GWAC. The capital costs, capacities, annual yields and other data, are the design figures reported to national registration agencies or published by the owners, developers and contractors. This is purely design data; actual measured output figures are not widely available.