More
Home Solar Is SolarCity the Next Amazon of Solar?

SolarCity has become a sort of proxy for the future of solar in this country. This tremendously successful company is coming up on a one year anniversary of its IPO in December. Several developments at SolarCity warrant a closer look into this dynamic company trying to stay ahead of the curve in a growing, competitive solar installation environment. 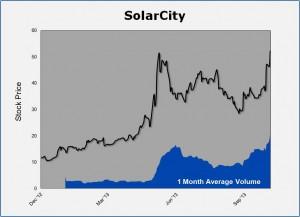 Despite skeptics, SolarCity’s stock is strong

There was much skepticism among investors when SolarCity was preparing for its IPO in 2012. Solar stocks had been badly beaten up in recent years – the Ardour Solar Energy Index (SOLRX)  had fallen fully 97 percent from its highs at the beginning of 2008 to its lows in November 2012. The reality for SolarCity, though, turned out to be much different.

Since SolarCity issued its stock on December 13, 2012, it has gained 466 percent! For the month of October alone SolarCity is up over 50 percent. Volume has steadily increased also. The one-month rolling average is at its highest level ever, and is double what it was just this past September.

Last Friday SolarCity announced that it had deployed 78 megawatts of photovoltaics in the third quarter of 2013. That is greater than what was installed in all of 2011, and about 70 percent of all megawatts SolarCity installed in 2012. As well, the number of customers has more than doubled, from about 40,000 in 2012 to over 82,000 as of September 30. Not surprisingly, the stock jumped 23 percent in one day on the news.

SolarCity expects the number of megawatts installed to be 278 for 2013, and almost doubling to between 475 and 525 megawatts for 2014. Third quarter revenues will be announced on November 6, so look for my report on SolarCity’s financial results around that time.

$345 million to be raised through stock offering and convertible note

On Tuesday, SolarCity rolled out a plan to raise hundreds of millions of dollars in new capital. Four large investment firms will be underwriting 3.4 million shares of common stock at $46.54/share. Additionally, SolarCity will offer over $200 million in convertible senior notes. The net proceeds from both are expected to reach $344.8 million, which is about 8% of its current market cap. If SolarCity can continue to use this capital to efficiently grow the company through marketing and finance options, then I see this as a very positive development.

Since September, SolarCity has made two large, strategic acquisitions. Earlier this month it acquired Zep Solar, a California-based photovoltaic mounting company. Zep Solar has been a component supplier to SolarCity, and its innovative “rail-free” panels makes for affordable and adaptable installs. This $158 million deal should add efficiencies to SolarCity’s bottom line.

In September, SolarCity closed on another significant deal, acquiring Paramount Solar for $120 million. Paramount Solar, formerly part of a highly regarded sales and marketing firm, should help put a professional edge on SolarCity’s public face. Since SolarCity is essentially trying to sell a complex material and financial product to a mass market, this will be a critical step to their ultimate success. 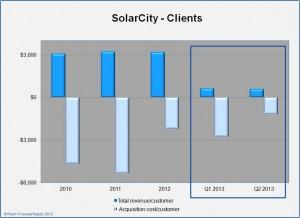 What does it all mean?

There is no doubt that SolarCity is a speculative investment any way you slice it. It has yet to turn a profit, and consensus estimates are betting that it will still have negative earnings in 2014 and 2015. Given that, some of the most important numbers to watch are revenue per customer, and acquisition costs per customer.

Revenue per customer have become somewhat compressed since 2012, though are holding steady from the last quarter. Acquisition costs per customer, on the other hand, keep improving. It will be important to see at year’s end how the annual numbers compare with 2012 and 2011. This will say much about when SolarCity will hit scale and become a profitable company. In the mean time, the third quarter earnings report should be very revealing as to how these trends are starting to play out.

I feel SolarCity is in a similar position that Amazon was in about 10 years ago (despite the fact that they are extremely different companies at their core). Amazon had a CEO that frequently made the press, negative earnings as far as the eye could see, and a strange business model that seemed to only be interested in market share at any cost. Many skeptics (including myself at the time) could not justify Amazon as a viable investment. Those who did invest 10 years ago, though, made a handsome 18 percent annualized return on Amazon stock. I would not be surprised at all if 10 years from now SolarCity skeptics will also be proven wrong.

Individuals involved with the Roen Financial Report and Swiftwood Press LLC do not own or control shares of any companies mentioned in this article. It is also possible that individuals may own or control shares of one or more of the underlying securities contained in the Mutual Funds or Exchange Traded Funds mentioned in this article. Any advice and/or recommendations made in this article are of a general nature and are not to be considered specific investment advice. Individuals should seek advice from their investment professional before making any important financial decisions. See Terms of Use for more information.

This article was originally published on The Roen Financial Report and was republished with permission.