I don’t usually follow solar stocks because I think solar is just a little too cool, and the space is too well covered by other analysts for me to feel like I can offer new insights. Nevertheless, the sharp decline in solar stocks this year has been tempting me to dip my toe in the golden stuff. Since I’m no solar stock expert, I’ve been flirting with buying other people’s picks.

Garvin Jabusch of Green Alpha Advisors has been making the case that the solar sell-off is irrational on this blog since June, but his consistent bullish stance on solar has made me nervous of his recently disclosed solar holdings in the Sierra Club Green Alpha portfolio CSIQ, FSLR, JKS, LDK, WFR, and YGE. With that many different stocks, I’d be tempted to take the simpler approach of buying a solar ETF such as Guggenheim Solar ETF (TAN) instead.

Another way I’ve been tempted to invest would be to try the industry’s low cost leader, First Solar (FSLR), an idea I talked about with Jeff Siegel of Green Chip Stocks at the Modern Energy Forum in Denver earlier this month.  Last Monday, Siegel put his thoughts on First Solar in writing, calling it “basically a $125 stock trading at $70.”  (On Sept 30, FSLR closed at $63.21, basically half of Siegel’s valuation.)

But I have not bought any of those solar stocks or ETFs.  Instead, I decided to sneak in the “back door of the solar market” by taking a couple of small positions in inverter stocks.

I first made the case for inverter companies as a way to avoid the hype in solar in 2007.  At the time I held Satcon (SATC), Xantrex, and Sustainable Energy Technologies (STGYF.PK).  I did well selling Satcon and Xantrex over the next year (Xantrex was bought out by Schneider Electric (SBGDF.PK)) and I think I sold Sustainable Energy at a loss when I was rationalizing my holdings during the 2008 financial crisis.

My past success with this “Balance of System” (BOS) approach made me look at the graphs of the current crop of inverter companies, now including market leader SMA Solar Technology (S92.DE/SMTGF.PK) which went public in 2008, and rivals Advanced Energy Industries (AEIS) and Power-One (PWER) which entered the inverter market more recently, in addition to the now-struggling SatCon.

The logic behind the BOS approach to solar is the theory that declining module prices will drive increased numbers of installations, while relatively inexpensive but essential components such as the inverter may benefit from the increased volumes without having to give up so much in terms of margins. The chart below, taken from the LBNL report Tracking the Sun IV, shows that inverter prices indeed held up well from 2007 to 2010, staying at a near constant 50 to 60 cents per watt for behind-the-meter systems.

Times are still hard for inverter companies, however, with Advanced Energy announcing that it will cut staff and shift some inverter manufacturing to China to reduce costs and SMA cutting its outlook for 2011.  Nevertheless, SMA stuck to its operating profit margin target of between 21 and 25 percent, but down from historic margins of 30 percent.

The negative announcement from SMA has dragged SMA, Power-One, and Satcon down 30 percent, 34 percent, and 42 percent respectively over the last two weeks while the S&P 500 has fallen seven percent, with Advanced Energy falling only 20 percent after taking earlier losses due to their own announcement referenced above.  Despite all this recent decline, only Satcon has fallen faster than the solar industry as a whole, as represented by the Guggenheim Solar ETF (TAN) over the last six months.

The valuations were looking very attractive, so I decided to take a closer look at the stocks. Rafael Coven, manager of the Cleantech Index behind the Powershares Cleantech Portfolio (PZD) told me:

While I like the BOS play especially Back of Panel the overall plunge in the solar market is not good.  Moreover, PWER doesn’t have, as far as I know, anything particularly outstanding or proprietary about its products.  I’m much more comfortable with SMA despite its big plunge.  SMA is the market and technology leader so I’d rather go with that since capacity and cost issues are key.  I’m not saying that any of them are great investments, just that SMA is a better company.

My initial preference was for Power-One, because of the much greater ease of buying the U.S.-listed company, but I decided to take a close look at SMA as well because of Coven’s comment.  I’m happy I did. 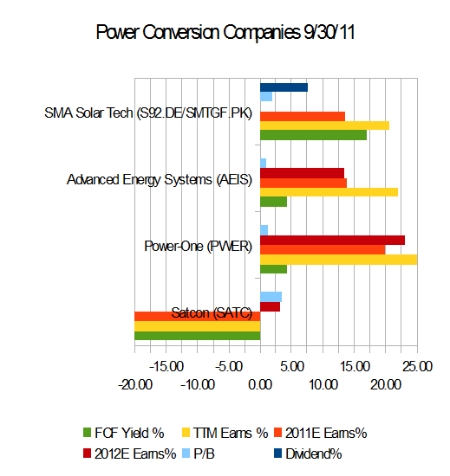 SMA Solar (S92.DE/SMTGF.PK) looks like an attractive income stock at current valuations, with the benefit of a large potential upside if PV modules prices continue to fall and lead to a new PV installation boom despite the recent incentive cuts in Germany and Italy.  Such a boom would be much more sustainable than previous solar booms, because it would be driven by solar prices approaching the price of retail grid electricity, and would hence be much less dependent on government subsidies.

As a potential downside, there is the possibility of new entrants into the inverter space adding to competition and eroding margins.  The advent of Micro Inverters, which Coven referenced in his “Back of Panel” comment is an opportunity for the inverter industry to maintain prices by adding more value, but they may also be an opportunity for new entrants (such as private EnPhase) to gain market share and increase overall competition.  The Chinese may soon decide that they want a home-grown inverter industry, and this possibility poses an ongoing risk to the current market leaders.  SMA has 40 percent of the solar inverter market for the same reason that German module makers used to dominate that part of the industry.  Could the inverter industry follow the PV module industry East?

For investors uncomfortable with purchasing foreign stocks, or unable to make a large enough purchase to be practical, Power-One (PWER) is the next best option.  I now have stakes in both companies.