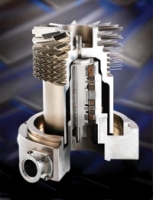 While solar sources currently generate only a small fraction of the world’s electricity, that fraction is projected to grow rapidly — some say to 10% or more by 2040. While the limited supply of fossil fuels and their adverse environmental impact are driving interest in solar energy, its success will ultimately hinge on whether solar energy can compete economically with other energy sources.

Although the total cost per watt has decreased as production volume has grown large enough to benefit from economies of scale and process optimization, cost reduction remains a primary concern among solar cell manufacturers. To a large extent, economies of scale can be attributed to the more efficient allocation of fixed costs, such as capital cost. However, this increases the relative contribution of variable costs — such as equipment maintenance, downtime, and energy consumption — to the bottom line.

Solar cell manufacturing typically involves a number of steps that are performed under vacuum to maintain cleanliness or to create appropriate processing conditions. Similar to the needs of semiconductor facilities in the 1980s, new, larger solar cell manufacturing plants require cost-effective vacuum solutions that manage the employee and environmental risks of hazardous materials and process by-products. Optimizing plant vacuum systems, with particular attention to reducing recurring and variable costs in a comprehensive total Cost of Ownership (CoO) model, can make a significant contribution to achieving manufacturing cost reduction targets.

There are three main types of solar cells in production: silicon wafer-based, also known as crystalline silicon or c-Si, compound crystalline — concentrator PV, and thin-film solar (TFS). Crystalline silicon solar cells are by far the predominant technology, currently accounting for 80–85% of all cells manufactured. TFS has recently grown to 15–20% of world production as a result of continuing shortages of solar grade silicon wafers and advances in thin-film technology. Compound crystalline solar cells, based on compound semiconductor materials, deliver high efficiency, but their high cost limits their use to spacecraft and other highly specialized applications.

Generally a c-Si solar cell consists of a p–n junction embedded in the wafer, sandwiched between front and back contacts, although solar cell designs vary by company. The solar cell includes a layer of material, typically silicon nitride, on the front surface of the silicon that serves as an anti-reflective coating (ARC) to increase the amount of light absorbed by the cell, and a passivation layer, which passivates the bulk defects present in the wafer. In general, c-Si solar cells are manufactured using mono- or polycrystalline wafers, but some manufacturers use ribbons of silicon to minimize the amount of Si used, and hence their costs.

In the first steps of the c-Si manufacturing process, high purity silicon ingots are grown either by the Czochralski method of crystal growing for monocrystalline Si ingots or by the die-casting/furnace method for polycrystalline Si ingots. Solar cells fabricated on monocrystalline wafers are more efficient than polycrystalline-based wafers. Dopants are added during the ingot growth process, creating either p-type, electron-deficient wafers or n-type electron-rich wafers. Most c-Si solar cells are manufactured on p-type wafers, but there are some that use n-type wafers in heterojunction or HIT PV cells. The ingots are sliced into very thin wafers of 180–240 µm in thickness, washed, inspected for breakage, and sorted.

The silicon manufacturing process requires vacuum pumps that work reliably in dusty environments because a crystal grower can generate several kilograms of silicon monoxide (SiO) particles per week. In a wet pump, the particles mix with the lubricating oil and erode internal components. Regular replacement of the oil and filters can mitigate these effects, but even with diligent maintenance, wet pumps require frequent rebuilding.

If a wet pump seizes during a crystal growth cycle, oil will back-stream into the crystal grower, resulting in costly tool downtime. Silicon ingot manufacturers are building large facilities that contain many crystal growers in order to respond to increased demand for wafers to make solar cells. Looking after the oil-sealed pumps supporting each of these growers becomes a costly and difficult logistical challenge involving extensive downtime for periodic maintenance, large numbers of spare parts, multiple drums of waste and replacement oil, and numerous technicians.

There is a growing trend among silicon manufacturers to use dry pumps on crystal pullers and growth furnaces, since they offer a significantly lower total CoO. Dry pumps are inherently clean and eliminate the risk of contaminating the crystal grower with pump oil. Specifically engineered dry pumps can handle high powder loads and provide significant reductions in maintenance cost and improvements in tool availability and productivity.

After the wafer manufacturing process is complete, the next step is to fabricate the solar cells on the wafer. The first step in this process is to texture the wafer surface, which increases the active surface area. Next is the doping and diffusion process, which creates the p–n junction by forming an n-doped layer on top of the p-doped wafer. A layer of phosphorous silicate glass (PSG) forms on top of the n-doped layer, and this is removed by either wet or dry-etch processes.

Dry etching requires vacuum pumps that can process extremely corrosive gases while maintaining a high gas throughput and low pressure. Magnetically levitated turbomolecular pumps (mag-lev TMP) that are specifically designed for harsh environments are ideal for this application. These mag-lev TMP typically use coated components that are compatible with the corrosive gases. They are virtually maintenance free because they are without mechanical bearings that require lubrication and periodic replacement.

Advanced TMP rotors are entirely suspended by mag-lev bearings, so there is no contact between the rotor and the stator. This effectively eliminates frictional wear and vibration, resulting in maintenance intervals as long as five years. An additional advantage of mag-lev is the elimination of lubricants that can be vulnerable to oxidation in corrosive environments, and which can lead to premature failure.

After the PSG has been removed, a layer of silicon nitride ARC is deposited on the front surface of the cell. Typically the layer is deposited using plasma-enhanced chemical vapour deposition (PECVD) or physical vapour deposition (PVD). PECVD gases and by-products — SiH4, NH3, NF3, F2, H2, HF — are pyrophoric, flammable, toxic, and a considerable safety risk. Large amounts of particulates are generated as well, creating a harsh environment for vacuum pumps.

Wet pumps are generally not suitable for this application, as the high powder loads cause rapid abrasion of the pump’s internal components and the corrosive materials rapidly degrade the sealing oil’s lubricating properties. Synthetic oils resist degradation, but still require periodic replacement. They are costly and their replacement presents a potential hazard for maintenance workers. Dry pumps specifically designed for corrosion resistance and dust handling are a better solution for this application.

Details of the mechanical mechanism of the dry pump can also be important. A design known as a hook and claw, arranged in multiple stages, provides efficient transfer of particles through the pump into the exhaust system. Reversing the central claw stage shortens the gas path to minimize residence times for particulate and corrosive materials. Multi-point nitrogen purge systems can also dilute the concentration of corrosive gases and vapours and promote the rapid transfer of solid materials.

Although screen printing is the primary technology for depositing back electrical contacts and reflective coatings, PVD is increasingly being used for these applications as well as for ARC/passivation. It offers low CoO with high throughput and film quality. PVD processes must be able to maintain high vacuum conditions (<5mTorr) while accommodating the flow of process gases.

A well designed TMP-based solution can provide a significant advantage in PVD processes because TMPs can tolerate more than twice the foreline pressure of diffusion pumps, and thus can use smaller backing pumps. High throughput TMPs can also reduce the overall number of high vacuum pumps by up to 50%. TMPs consume less than one tenth of the energy used by diffusion pumps and offer maintenance intervals of up to five years, whereas diffusion pumps require frequent, costly oil changes.

After the back reflective coating and contact layer have been deposited, the solar cell is complete and the wafer moves to the module production line. During this process, the wafers are electrically connected in the tabbing and stringing process and then encapsulated to provide protection against the environment. The encapsulating material, typically ethylene vinyl acetate (EVA), is applied at high temperature under a vacuum. As with so many other processes, material emitted by the EVA degrades the lubricants used in wet pumps. The lower maintenance costs and higher availability of dry pumps again provide significant benefits in overall cost.

Vacuum pumps are critical infrastructure components of crystalline silicon solar cell manufacturing operations, enabling essential processes from wafer formation to final lamination. Selecting the appropriate vacuum technology for each step is complex, but the benefits of dry pumps appear to include lower up-front costs, reduced energy consumption, decreased maintenance requirements, and increased personnel safety. All in all this adds up to a significantly lower lifetime cost of ownership than their wet vacuum pump cousins.

Peter Holland is regional business manager for Edwards in the U.S.