The Investor Responsibility Research Center Institute just released a report analyzing the top 25 U.S. investor-owned electric utilities, and one of the highlights is that these 25 largest utilities collectively spent over $400 million of money (from their ratepayers) lobbying in the past four years. In many cases, this involved lobbying against net metering, renewable energy standards, or incentives for solar energy.

What could that money have bought if instead spent on the things that most electric customers want, such as solar energy?

If utilities spent the $400 million directly, they could purchase about 133 megawatts of distributed solar. Against the more than 25,000 megawatts already installed, that’s a paltry amount. Even if the utilities bought utility-scale solar, at about half the upfront cost (and ignoring any need for transmission infrastructure), the money would still get just 266 megawatts.

But getting solar installed hasn’t just been a story of using utility money, but rather more than half the installed capacity has come by motivating private capital (e.g. customers installing with their own money). If the utilities instead offered a $1.00 per Watt rebate for customer-owned solar installations, the $400 million would instead support 400 megawatts of solar. At 50¢ per Watt, it would support 800 megawatts. That’s a goodly amount more.

But as California has shown with its now-expired Solar Initiative program, people there and in many other jurisdictions don’t require additional solar incentives to go solar. Instead, customers need attractive low-interest financing or “zero money down” options such as those provided by solar leasing companies. There’s a particularly potent tool that could get us more solar for our money, called on-bill repayment or on-bill financing. Several utilities have offered on-bill financing for energy efficiency or on-site renewable energy (see map below). Many more could  offer this tool to repay a loan to install solar via the utility bill. 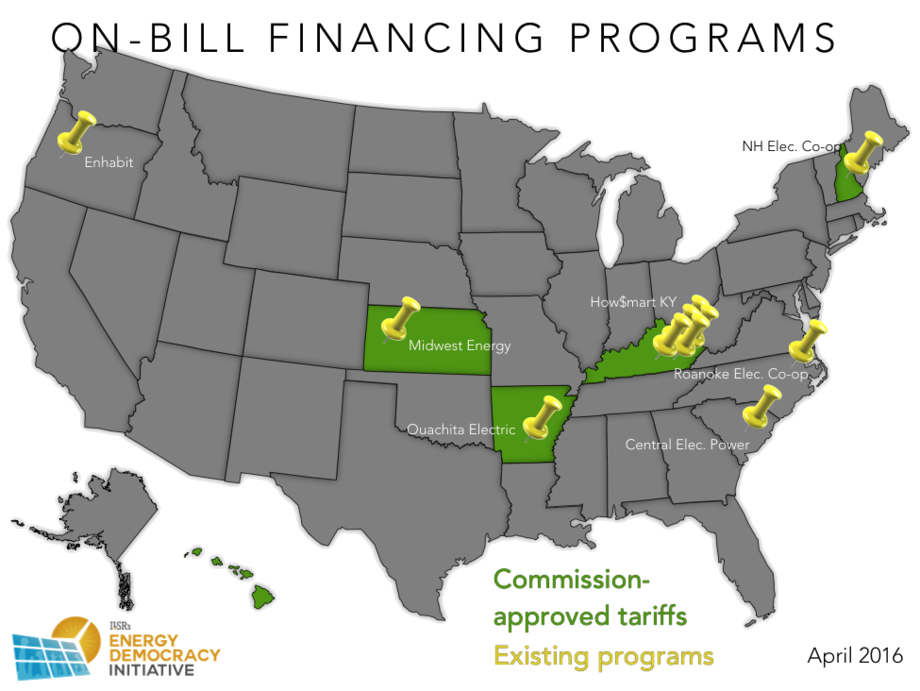 How much solar could be installed if the $400 million spent on lobbying were instead spent on creating a solar financing opportunity?

$400 Million Backstops a Helluva a lot of Solar Financing

Let’s say a utility offers an on-bill repayment program with the money used to secure lenders in the event of customer’s failing to pay the bill. The best design of such a program would not credit screen applicants (nor should it, since the default risk to the lender is zero), and would require zero money down. If we withhold 1% of the money to cover administrative costs, we still have $396 million to backstop solar loans. Since the default rate of on-bill repayment programs is a tenth that of consumer loans (0.3%, although we’ll use 0.5% to be conservative), the $396 million in loss reserve covers $79.2 billion in solar financing.

At zero money down, and installed costs of $3 per watt, our $400 million would finance 26.4 GIGAWATTS of solar, or more than the entire installed capacity in the entire U.S. through 2015.

It’s worth repeating: if the top 25 electric utilities have spent their $400 million lobbying budget on solar loans through on-bill repayment programs, they could have doubled the installed solar capacity in the U.S.

The question isn’t whether utilities could have spent the money better. Of course they could. The question is why we let these monopoly companies make these choices with our money.

Is someone you know changing the world? Nominate them for the constellation prize