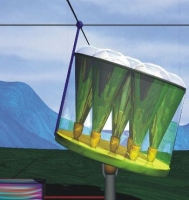 The Suncone, a solar collector prototype in development by Barnabus Energy through contract with Hytec of Los Alamos, New Mexico, is an inflatable, cone-shaped system that focuses sunlight on a target rod for conversion to electric power. The Suncone is made of an aluminized film (usually nylon or Mylar) with a transparent film over the end facing the sun. It maintains its shape through air pressure. The prototype is approximately 2 meters long with a 1.5-meter radius at the wide end. The system, if successfully completed, will be less expensive and labor-intensive than standard parabolic dish or trough design and require less precise placement, according to Barnabus. The Suncone can achieve temperatures or 2000degreesC and has a collection efficiency of 90% at 600degreesC, according to Barnabus Energy.

Suncone Solar Collector SOLANA BEACH, CA — Barnabus Energy, Inc. is pleased to announce that its principal contractor on the Suncone project, HYTEC, Inc. of Los Alamos, NM, has achieved a significant milestone in its first phase of work: The construction of the first full-scale prototype, and commencement of engineering analysis. HYTEC’s fast-paced five month initial phase was highlighted with a field test on February 10. Data analysis from the test was completed on February 21. Data indicated that the predicted reflectivity was attained and the automated sun-tracking system functioned well. The rapid thermal rise at the collector brought cheers from the technicians and engineers in the control area. Tim Thompson, HYTEC’s President and CEO, said, “Working with Barnabus on the development and commercialization of Suncone is very exciting for our company. Renewable energy systems are extremely important to achieving a safe, secure national energy policy. We believe Suncone has the potential to be less expensive than other solar collectors, producing high temperatures at greater efficiencies than competitive parabolic dish or trough systems. We are thrilled to participate in the development of this invention.” David Saltman, CEO of Barnabus, said, “Tim and his team at Hytec Engineering have done a remarkable job moving from a concept to full scale prototype. On the basis of this first set of trials, we have already made the decision to move to the next phase, which will entail design optimization of the materials, the tracking mechanism, the target rod, and the interface with an electrical power-generating turbine and a water purification system. This phase will result in design specifications for a commercial product. We hope to accomplish this development by early summer.” http://www.barnabusenergy.com