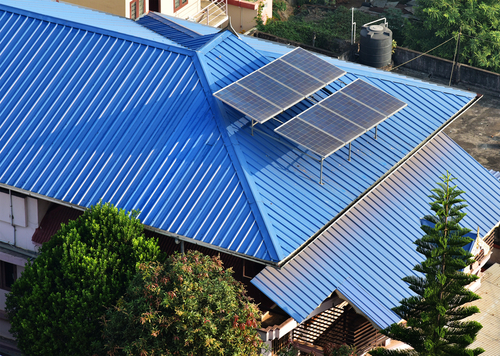 State-owned NTPC Ltd., India’s largest power generator, will award the tenders for 500 megawatts to 1,000 megawatts of electricity in July, Tarun Kapoor, a joint secretary in India’s Renewable Energy Ministry, said in an interview in New Delhi.

“NTPC will show the way in dollar bidding by bringing solar tenders in a month,” Kapoor said on June 25.

The contracts will pay the rupee equivalent of the dollar tariff determined by the bidding, and NTPC will create a fund to manage the currency risk it takes on, people familiar with the matter said, asking not to be identified as the plan isn’t public. The step may lower solar costs by making cheaper dollar-based financing easier to access, they said.

Modi’s target is 100 gigawatts of solar power by 2022, up from about 4.1 gigawatts currently, to reduce India’s reliance on dirty, coal-fired power plants that make the nation one of the world’s biggest polluters. He needs to find about $94 billion to realize his goal, part of push to end blackouts.

The dollar-linked tariffs could reduce developers’ borrowing costs by a third, pushing solar tariffs down by a similar proportion, Kapoor said.

The challenge for dollar-based pricing is whether India can scale up the program while shouldering the currency risk.

State-owned utilities could “take a big hit on their balance sheet as the dollar hedging would be on their accounts,” said Gyanesh Chaudhary, chief executive officer at Vikram Solar Pvt. in Kolkata.

India can’t expect electricity distributors to pay dollar-based tariffs, since many are forced to sell below-cost power to keep energy affordable for the 740 million Indians living on less than $2 a day.

Under the dollar-based program, the retailers don’t bear any currency risk and will pay a fixed rupee tariff to NTPC for the solar power, the people said. However, many distributors make heavy losses.

“There’s a risk of default of payment by distribution companies, and if the government is going to hedge it, is this sustainable?” said Sujoy Ghosh, the India country head for Nasdaq-listed First Solar Inc.

That’s one of a number of obstacles Modi must overcome to transform India’s energy mix. His objective is 175 gigawatts of green energy capacity by 2022, up from about 37 gigawatts, at cost of $200 billion — more than the size of Vietnam’s economy.