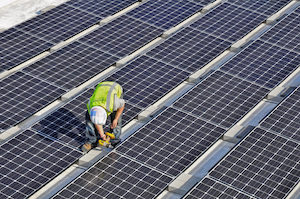 A major developer of large-scale solar in the Northeast is launching operations in Illinois, expecting the state’s new energy law to jumpstart the industry in a way similar to what happened in the company’s home state of Massachusetts.

Solect has installed more than 80 MW of commercial and industrial solar in the Northeast and is Massachusetts’ largest solar developer, according to the company. Illinois is its first expansion outside that region.

“As we started to consider expansion, we identified a couple of opportunities where we felt like the legislature was behind the growth and in support at the community level, as well as where the economics would make sense to invest,” said Craig Huntley, the company’s chief development officer.

In Massachusetts, there was little solar installed before the state created a program to sell Solar Renewable Energy Credits (SRECs) in 2010, according to Huntley. Eight years later he sees parallels in Illinois thanks to its Future Energy Jobs Act (FEJA), which calls for exponentially increasing solar from about 74 MW to 3,000 MW by 2030, largely through the sale of SRECs.

Much attention in Illinois has focused on SRECs for smaller and residential solar projects, in which the value of the credits will be paid to customers upfront. That FEJA incentive helped convince national residential solar developer Sunrun to start doing business in the state this year.

Solect’s move to Illinois is a vote of confidence for the law’s impact on larger projects, in which the value of SRECs is received over time as energy is generated, making it still necessary to find upfront financing.

“What we have to be able to do is make an economic case to the finance community,” Huntley said. “The duration it takes to return the investment from the income streams [from SRECs] is critical.”

Huntley said the company expects to develop solar arrays of up to several megawatts each in ground-mounted installations and on the rooftops of big box stores and industrial facilities. The company plans to own some of these installations in a third-party ownership situation where the property owner will lease the panels or buy the energy from Solect.

While community solar was a key provision in FEJA’s goals of making solar accessible to individual households and specifically low-income and rural residents, larger community solar projects would likely involve industrial entities or institutions as subscribers.

Along with the SRECs, Solect found Illinois attractive for solar development because of the state’s net metering policy and a rebate under FEJA that pays some money upfront even for larger projects.

Huntley said that the federal Investment Tax Credit is also crucial to making solar viable. And while the credit is scheduled to ratchet down, Huntley said he thinks it will help drive a flurry of business in Illinois in the near future.

“I can’t overstate the importance of the subsidy support,” said Huntley.  “Subsidies do make a difference.”

But with the cost of solar coming down quickly, he added, it will be more viable even without incentives in the future.

Massachusetts typically has higher energy prices than Illinois, making solar a potentially easier sale, but he expects solar to take off in Illinois especially as developers like Solect do outreach and marketing to potential clients.

“In Illinois once everything’s final [under FEJA], I think the buildout will be aggressive and quick,” he said.

Huntley noted that in some states that have instituted solar-friendly laws and policies, developers from other states have swept in, sometimes to the chagrin of locals.

He said that’s why he is intent on hiring Illinois staff for Solect’s new operations. Solect has hired three people in Illinois so far, and Huntley expects to hire 10 by year’s end. Some design and administrative work for Illinois projects will be done out of Massachusetts, and Solect will subcontract local solar installers.

Huntley said the company’s analysis shows 40,000 rooftops in Illinois ripe for solar installations of 100 kw or greater. He noted that when he was in law school in Chicago years ago, when flying into O’Hare airport he would see the city’s scores of large flat roofs as something of an eyesore.

“Now I have a very different perspective — those are all opportunity, an opportunity to put the roof to work as a generating asset,” he said. “I can’t tell you the number of times I’ve heard potential customers say, ‘I don’t know why everyone doesn’t do this.’ The economics make sense, it’s a win-win for the economy and the environment.”