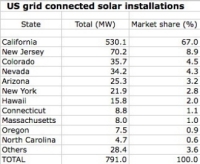 Sun-drenched California leads the US with 67% of the country’s grid-connected solar power — but how did a little East Coast state like New Jersey gain the No.2 spot with nearly 9%, surging to nearly 4000 PV installations generating >85MW? The story behind this progress was told at a session at PV America, a new exhibition/conference in Philadelphia, June 8-10.

While it’s not surprising that sun-drenched California leads the US with 67% of the country’s grid-connected solar power, how did a little East Coast state like New Jersey gain the No.2 spot with nearly 9% (and double the power of No.3 state Colorado)? Making this achievement more remarkable is that in 2001 New Jersey had only six PV installations, and now there are nearly 4000 generating >85MW.

The story behind this progress was told at a session at PV America, a new exhibition/conference in Philadelphia, June 8-10. The recipe for the “secret sauce” that made it all possible was revealed early on by Dr. Jeanne Fox, president of the NJ Board of Public Utilities.

“I believe that New Jersey is the best place to do solar in the country, policy-wise,” Fox explained. Her background includes stints both within the electric utility industry and the Environmental Protection Agency (EPA); she confessed she is not technical, having been a philosophy major who went on to get a PhD in law at Rutgers. As an EPA administrator, she said she went to a briefing in Washington DC on the coming impact of climate change — it was so scary, she said, that she realized the electric utility industry would have to make dramatic changes in the future. So she campaigned for a job where she could help do something about it, and came on as the head of the public utilities board in NJ in 2002.

At that time, the state offered rebates for solar installations, but she found out how difficult it was to do one when she tried to help a solar facility get hooked to the grid in Kearney, NJ, in 2004-2005. Out of that experience came new standards for two-way net metering and for interconnection to the grid. In addition, it was later decided to get away from a rebate system to a free-market mechanism. While this would take the onus off of taxpayers and ratepayers, even more important it would enable long-term contracts.

A system of solar renewable energy credits (SREC) was developed, and $3M was spent on the first SREC tracking and trading system in the US, according to Fox. New Jersey now gets fees from other states for the use of this pioneering system.

Another factor helping the state to boost alternate energy was the view of Governor John Corzine, who realized that environment and energy policies are interlinked, but also saw a business opportunity. “Minimizing our carbon footprint can and should go hand-in-hand with increasing economic vitality,” he stated. This view drove NJ’s “Master Plan” goals, according to Fox. These include:

“That means we will need 3100MW from solar by 2020,” Fox explained. To get this rolling, the state budgeted $260M to invest in stimulating solar industry and use over the 2002-2008 period. If rebates were used instead of the SREC trading system, it would cost the taxpayers more than $3B to reach the 3100MW by 2020.

Instead, there is a steadily rising level of renewable portfolio standards (RPS) that the electric utilities in the state must meet each year, according to Maureen Quaid, renewable energy market leader, NJ Clean Energy Program, Conservation Services Group. The RPS targets each year are based on a percentage of the total electric load, she explained. Instead of building all their own renewable energy power generators, the utilities can also meet these requirements by buying SRECs in an open auction from installers and operators of distributed solar facilities. One SREC is earned for every 1000kWh of generated energy, and its price is capped at $711, although the trade value is usually less than that.

Solar is now spreading across the state to schools, hospitals, funeral homes, and residences, as well as commercial and business sites, according to Fox. She cited a Johnson & Johnson solar array over a parking lot next to the Amtrak tracks, and a massive rooftop system at Hall’s Warehouse Corp. in South Plainfield, NJ. This last facility was built and operated by a California company to supply electricity to Hall’s huge complex of refrigerated storage units. Hall’s put up no frontend investment, but now pays the installer and operator for the electricity supplied at a lower rate than it was paying to the local power company.

“There is still a bureaucracy, including the federal government, as well as the state,” Fox explained, but with clear standards, tradable credits, and the ability to work out long-term contracts, solar can make good business sense.

To make the SREC system realistic, she said, measurements and trades are based on real outputs, and costs can be spread over 15 years. The rebate system is being scaled back; it still is used for smaller installations — up to 10kW for homeowners, and up to 50kW for small businesses, according to Fox — but will be phased out in 2012.

While this ambitious program has made great strides, some fine-tuning is still needed, based on comments and questions from audience members doing solar business in NJ. The value that can be placed on future credits, for example, isn’t known until the October auction, leaving very little time to file federal paperwork, one installer complained. Fox explained that the utilities claimed they needed the time to develop bids, but she promised to discuss the matter with them.

There was also new concern about rules changing after long-term contracts were agreed upon, and Fox said she intended to stay on the job for years. With support coming from the top, and the willingness to be flexible when needed, NJ appears to have a bright future in solar.

Editor’s note: The following was sent by a reader on June 18:

Although your article was informative, I would be remiss if I did not notify you of an inaccuracy.

You made a reference to the Hall’s Warehouse solar project. A California company, enXco Development, did participate in the project. However, our company, Vanguard Energy Partners, LLC, built the project for enXco. enXco developed the project and acts as the Power Purchase Agreement provider. In fact, this was the second phase of the Hall’s project. Our firm built the first phase of the project in 2007, which is owned by Hall’s. The total capacity of both phases is approximately 3.2mW.

Our company has been a design/build firm in the State of New Jersey since 2003. Vanguard has built nearly 10% of New Jersey’s RPS. We are very proud of our accomplishments and endeavor to be a leading provider of renewable energy systems in the nation.