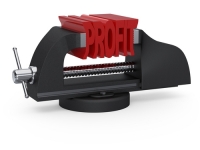 The photovoltaic industry is currently in a state of extreme contraction brought about by overbuilding, which was brought about by the belief that the feed-in tariff incentive model would continue expanding from region to region and which was exacerbated by decades of fighting for profits and incentives in a world that largely considered the PV industry either a science experiment or the lifestyle choice of hippies. The current infighting has made enemies of colleagues. Artificially low prices have encouraged governments to believe that enough progress has been made, and that incentives are no longer required.

Since the beginning of photovoltaic industry time participants have had to fight for every incentive dollar.  The term “grid parity” has been used as almost a promissory note towards the end of achieving continued incentives.  That is, a promise was made by the solar industry and all of its participants that the cost/price of installing a PV system would decrease at an aggressive rate to the point that the electricity generated would be at parity with other electricity generating technologies. One of the assumptions used in this regard was that the cost/price of conventional energy would continue to rise. This assumption ignores the volatile pattern of pricing behavior for any good, while also assuming that the cost of manufacturing solar technology would follow a more or less smooth downward slope.

The promise of grid parity also ignores (or, at least looks the other way) the fact that during most of its incentive-driven history, the cost of manufacturing a solar panel and its selling price have been disconnected.  One reason for this disconnect between cost and price is that for most of its history there has not been significant pull (the term to describe when buyers pursue a product). The promise of grid parity and the goals that have been set up in its name also ignores the fact that at every point in the chain all participants must enjoy a margin comfortable enough to conduct R&D, pay employees, expand, develop products and, in short, conduct business in the global market place. The solar industry, in sum, has promised itself into a precarious state where margins are memories and company failure is accepted instead of mourned.

Figure 1 offers a history of PV industry pricing and demand from 1975 through 2011.  Note that periods of strong demand and significant decreases in average technology prices have coincided with periods in which significant incentives were available. 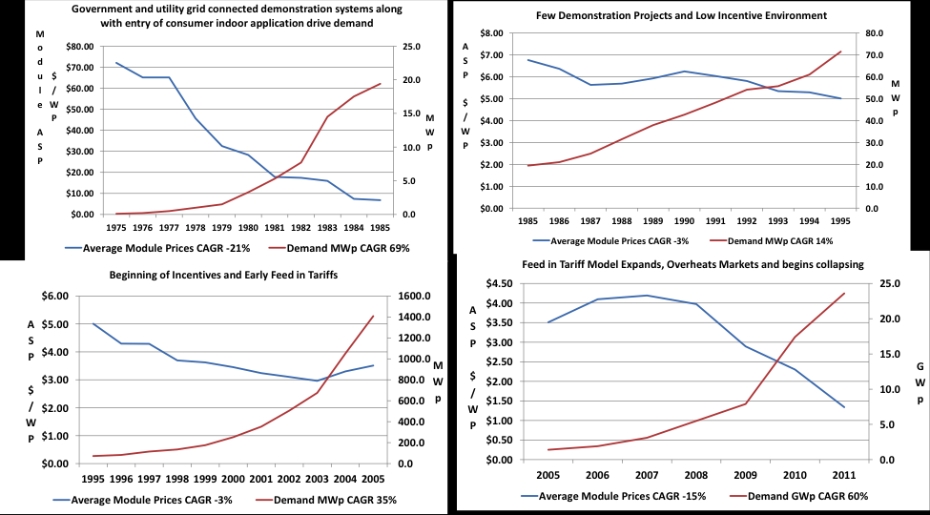 In 2009, at the height of the feed in tariff era, the average selling price (ASP) for PV modules decreased by 33% over the previous year, from an ASP of $3.25/Wp in 2008 to an ASP of $2.18/Wp.  The price of cells decreased 61% from $3.20/Wp in 2008 to $1.26/Wp in 2009.  Though a one year decrease in prices of >30% for modules and 61% for cells cannot be considered normal progress, and though this price correction was driven almost entirely by aggressive pricing, it was proclaimed a great achievement and absolute proof of progress.  This progress has continued through to the current period, Q4 2012, and is continuing to drive technology manufacturers into bankruptcy.  If this is progress, a healthy period of stagnation would be preferred.

Grid parity is a concept with many definitions.  Grid parity is also a marketing term and is an unhealthy goal as it pits solar in a battle for energy share with conventional energy, which will continue to enjoy healthy subsidies.  Prices are currently held down by high levels of inventory (which is being resold) and the expectation of low prices springing primarily from rumor.  Figure 2 offers prices from 2011 through Q4 2012.

Despite it All, Solar Will Survive

The solar industry, and all of its technologies including CSP and CPV, is currently facing challenges and this painful period will continue for some time to come.  The current contraction is complicated by a trade dispute in the U.S. and discussions of a trade dispute in the European Union. A slowing global economy complicates recovery for an industry that needs significant investment on the manufacturing and installation sides of the solar value chain. Decreasing incentives are further straining margins and the new incentive paradigm, PPA and tender bidding, does not support the true value of solar.  Business models, including the US lease model, need maturing.

It is a good thing that a) innovation thrives in times of hardship and b) the solar industry has significant experience with hardship.  Over its ~40 year history, industry participants have continued to innovate — through technology development, system design and balance of systems improvements — all the while fighting governments for continued incentives and a complacent energy buying public.  Moving forward, technology innovation will continue. Right now it is crucial to develop business models that allow for healthy margins and provide value to customers. Along with business model development an educational effort must be undertaken by the industry. Energy buyers need to learn the details about the subsidies that conventional energy continues to enjoy so that they can make clear choices based on facts. Forget LCOE for a while and focus on data — facts — about the true, unsubsidized cost of conventional energy and yes, nuclear.

True facts about costs are important and so is a solid effort to change the conversation from cheap to quality.  Solar does not have to be the cheapest electricity choice. It needs to be recognized as a high quality, reliable, long lived energy technology.  Once a solar electric system is installed the fuel (sun) is free.

Distributed generation (DG) solar — power at the point of need — involves individuals and communities in their energy future, offering all stakeholders energy independence. As storage technologies mature and become more economical the value that energy independence offers will be clear.

Lead image: Profits in a vise via Shutterstock.