Part one of this series examined the problem of incorporating securitization debt into a financial structure with its highly sensitive tax attributes — that is, how the legal structure of a securitization transaction contains certain elements that may trigger a recapture of the tax incentives, thus diminishing the value of a tax equity partner’s investment.

This second installment will look at two solutions to this problem as proposed by a team of highly experienced structured finance and tax attorneys participating in NREL’s Solar Access to Public Capital (SAPC) working group. This SAPC legal team has devised two possible structures that would allow for solar sponsors/developers to access capital market finance through securitization of their contracted cash flows: the pre-buyout option and the post-buyout option. The first structure, referenced below as the “pre-buyout” option, is executable before the tax recapture period has elapsed — that is, before the sponsor/developer has the ability to exercise its option to buy out the tax equity. The “post-buyout” option would be used to fund the sponsor/developer’s buyout of the tax equity investor’s interest in the project or portfolio once the tax recapture period has expired. See Table 1 below:

In the pre-buyout structure, solar developers would not be the issuers of the securities and would therefore not be required to enter into the typical process required to securitize cash flows. In other words, they would not assign their assets — the solar systems that they originate and the cash flows from those systems — in a bankruptcy “true sale” to an SPV. The pre-buyout structure instead assumes that a bank will make a series of loans to project developers that would be secured by the developers’ partnership interests in their project entities. The bank would then enter into the typical securitization process of assigning those loans to an SPV, which would then issue the securities.

Here’s a closer look at how this structure would work: A bank would make loans to developers backed by the developers’ equity positions in their projects via the project entity. (Note: this type of lending is not yet evident in the market, but the SAPC legal team anticipates that a market could develop if banks have the option to securitize and generate capital). Each developer would pay down its loan with all or a portion of the cash flows generated by its equity position. Assuming that a bank had a portfolio of these loans, it could then pool the portfolio and the payments thereunder into an SPV. The SPV would then issue securities against the assets it held and these securities would be sold to investors. A portion of the proceeds from this sale would be used to fund the bank’s origination or purchase of additional loan assets, which it would then turn around and securitize. This cycle could be repeated each time sufficient origination is aggregated by the bank to go into the securitization market.

It should be noted that the pre-buyout model is ideally suited for partnership flip agreements. It will likely not work with the sale-leaseback structure because the developer’s cash flow is not usually adequate to form the basis for significant financing. This is because developers only receive a small spread between their payments due to tax equity (under the so-called “head lease”) and the payments they receive on the underlying leases and PPAs. 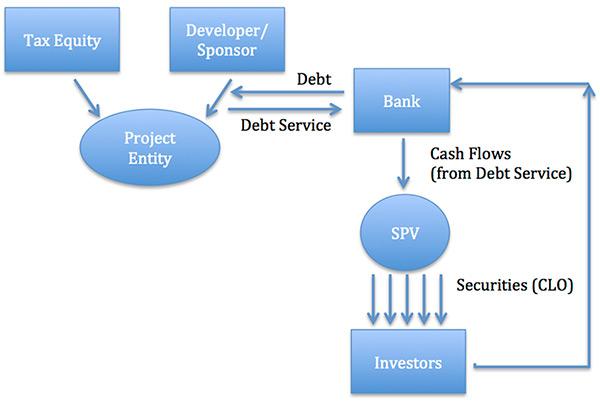 One of the advantages of this model is that even small developers with insufficient origination or bandwidth to execute their own securitization program may have a ready market for their assets in the form of these conduit facilities (which are essentially bank SPVs that collect assets from multiple originators). Thus, although this structure does not enable the smaller solar developer to access the securitization market directly, it does allow for indirect access. Moreover, banks can securitize these loans at more favorable rates than smaller developers could securitize their own cash flows, and thus potentially pass some of this pricing through to developers in the form of a lower interest rate.

This structure would also eliminate the requirement that the smaller developers create their own infrastructure to manage their own securitization program, with the attendant costs of organizing and maintaining SPVs and third-party costs of underwriters, trustees, back-up servicers, operation and maintenance (O&M) providers, and accounting firms. The tradeoff is that developers would likely be charged an ongoing “rental fee” for their use of the bank’s SPV (sometimes referred to as a conduit facility). This rent would likely be the spread captured by the bank between the rates on the developer loans and the rates on the securities issued.

Another challenge of this structure is that the securitizations will be backed by the partnership interests of the developer rather than by the leases and power purchase agreements (PPAs) from the underlying solar assets. This means that the cash flows being securitized would be subject to disruption at the project level (e.g., a developer default). Cash flows from leases and PPAs can be more insulated from these project-level risks. Also, from the ratings agency perspective, the process of analyzing the reliability of these cash flows would exponentially increase as the number of underlying partnerships increases. Although there are tangible benefits with diversity in the number of project partnerships (i.e., “portfolio effect”), this benefit can be eroded by the complexity of the analytics required to obtain a rating.

The pre-buyout structure is also challenging from a tax equity perspective. If a developer defaults on its loan, then the bank would need to step into the developer’s position in the project entity to protect and realize upon its collateral. As stated in Part I of this series, the tax equity’s interest in the partnership is typically to prevent any changes of ownership for tax and management continuity purposes — the bank’s step-in rights could run counter to these interests. Moreover, if the bank forecloses on the equity interests, then recapture could be triggered, and the tax equity could lose any unrealized tax benefits.

To permit these step-in rights and pledges of the developer’s partnership interest would probably require the negotiation of tripartite agreements among tax equity investors, the developer, and the lender. The mock ratings project currently under way in the SAPC working group is intended, in part, to educate the market on the types of provisions that should optimally be included in these agreements.

The post-buyout structure is designed for execution after the recapture period when the tax equity has received the full value of the investment tax credit (ITC) and accelerated depreciation. Developers could use the proceeds from this securitization to finance the buyout of the tax equity, which is common for developers to do after recapture. The developer would essentially purchase the solar project or portfolio using its own funds (derived primarily from the securitization), and thus acquire full control to pledge the solar assets and cash flows to backstop the securitization debt.

This structure could be advantageous for developers because it affords them the time during the 5-year recapture period to prove the viability of the solar assets, the O&M systems, and the partnership accounting and reporting protocols. It also allows them to prove the reliability of the cash flows needed to obtain a favorable rating. However, it would mean that developers could not expect to leverage their projects using potentially lower-cost securitization debt until later in the life cycle of the projects.

Another challenge of this structure is in the size and capitalization requirements for the developer/sponsor. Because this model envisages a single developer-sponsored securitization, it presupposes a critical mass of solar assets to support an economic securitization. This may limit the potential issuers to the large third-party finance providers and installers and a handful of commercial developers. One possible alternative for the smaller players would be a multi-issuer financing where several solar originators pool their assets into a single securitization, with each sponsor forming its own separate SPV. These SPVs would receive the transfer of each originator’s solar assets, and each SPV would issue its own separate debt instruments. These debt instruments could then be pooled into a grantor trust, which would in turn issue pass-through certificates to investors.

The SAPC legal team will be testing these structures in a mock filing with major ratings agencies this fall. One of the goals is to see what type of credit rating they could obtain given a representative pool of solar assets. More information on the mock filing will become available as the process plays out — in the meantime, the SAPC legal team is drafting term sheets (documents that describe the legal structure of the securitization and are included in a bigger packet of information about the deal) to accompany these filings.