It is no secret that the residential solar market is booming. Declining panel prices, the rise of third-party PPAs, and the spread of the Solarize model—these are familiar storylines to anyone with a passing knowledge of the solar industry. And those of us with a passion for clean energy are more than happy to share the good news.

But as we celebrate the extraordinary success of the solar industry, there is something missing from the conversation.  Specifically, how do we share the benefits of solar more equitably?  How do we ensure that solar is within reach of every American household, not just those who can afford to install panels on their rooftops?

The good news is that we now have an answer to this question: community shared solar.  Households can now buy a portion of an offsite solar array in their area and see a credit on their utility bill for the energy their share produces. Harnessed properly, community solar presents a real opportunity to address inequalities in the residential solar market in at least three ways. 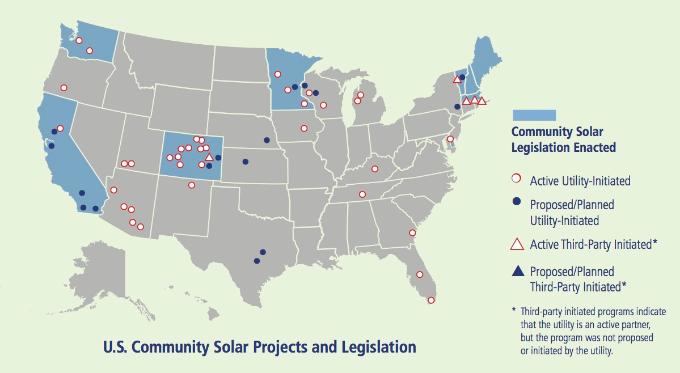 There’s no getting around it: Rooftop solar is a complicated undertaking.  To go solar, a homeowner needs to do her diligence on which supplier to buy from, understand whether her roof it suitable for an array, take time to meet with contractors and installers, and, in some cases, perform ongoing operations and maintenance.

These obstacles appear daunting enough for any household.  They present especially large barriers to entry for low- and moderate-income families for whom time is scarce. In a market survey, Solstice Initiative found that half of all people who wanted to switch to solar did not end up doing it because they did not understand the enrollment procedure.

Community solar does away with the hassles of rooftop solar. It allows households to opt in to a local solar project through a simple process comparable to signing up for a gym membership or subscribing to a magazine.  That is an enormous step forward.

Community solar can also address hesitance on the part of lenders to extend solar access to non-traditional households, such as low-income families.  Today, if a rooftop solar customer defaults on his solar lease, the developer is left with an expensive stranded asset on its hands.  It is no wonder then that risk-aversion is the status quo.

By contrast, community solar creates a market where developers can mitigate their risk.  If a customer for community solar fails to pay for their share, the developer can swap that customer out and find someone else to take it over.  In places like Massachusetts, the process of transitioning customers can be improved, but the ability to reshuffle participation is a useful hedge for developers.  And that means more households that can go solar, at a much broader range of incomes and risk profiles.

Scaling Up through Communities

Renewable energy is taking hold not because of some slick advertisement, but through old-fashioned word of mouth.  Solar is quantifiably contagious — and community solar is designed to take advantage of precisely that fact.  Community solar gives our cities and towns a sense of mission, common purpose, and collective action. It transforms sustainability from a solitary pursuit — like sorting the recycling — into a collaborative effort where neighbors exhort one another to go green.

At Solstice Initiative, we take this approach to heart. We partner with community organizations to spread the word about community solar projects and, as a token of our thanks, we provide a donation to those organizations for every household that signs up. We are already working with Next Step Living on their community solar projects in Massachusetts, and we look forward to introducing this model to towns all across America.

For as much progress as the solar industry has made in recent years, residential rooftop solar remains the province of the fortunate few, with approximately 80 percent of American households unable to access it. By lowering the barriers to entry, mitigating risk to developers, and inviting neighbors to come together to build a renewable energy future — community solar presents a transformative way to broaden the market for solar power.